What Exactly is Rational Choice?

I sometimes surprise people when I say that I have no idea what rational choice is.1  How can a game theorist say such a thing?  Especially one who spends so much time on the internet arguing about rational choice?
END_OF_DOCUMENT_TOKEN_TO_BE_REPLACED 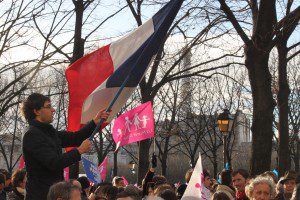 In a startling juxtaposition, neofascists killed young leftist activist Clément Méric in the first days when city halls across France opened for lesbian and gay couples to marry.  And perhaps the debate on marriage weakened President François Hollande despite his victory.  That is because no one anticipated the revival of a moral intransigence and violence reminiscent of the rightist movements of the 1930s, as the debate intensified divisions within the Gaullist-led coalition essential to the 5th Republic and unsettled laïcité at the core of the Republican consensus.

French laïcité – the principle that religion has no role in government – is rooted in the struggle against legitimists and the Church waged since the Revolution: from the suppression of the Chouannerie uprising, through laws on secular education and the separation of church and state under the Third Republic, to the bloody clashes between legitimists and leftists on the streets of Paris in 1934.  Only after Vichy and the Resistance transformed politics, and the Algerian war provided pretext, would Charles De Gaulle find France ready for a broad republican movement moderating secular left and national right alike.

END_OF_DOCUMENT_TOKEN_TO_BE_REPLACED 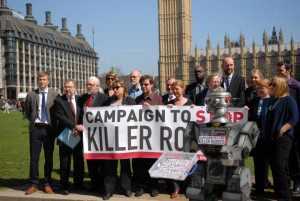 Many of you know that I’ve been traveling (and blogging) much less this past year while completing my book manuscript on neglected advocacy campaigns (and steering a daughter through a tough junior year). However one trip I managed to make recently was the April 22 NGO Conference for the Campaign to Stop Killer Robots, which preceded the public launch of the campaign at Parliament. Humanitarian disarmament groups see this as the “next landmine campaign,” and with Nobel Peace winner Jody Williams leading the charge along with disarmament elites at the Arms Division of Human Rights Watch and a growing coalition of NGOs and sympathetic states, it seems as likely as any previous ban campaign to succeed.

Certainly the issue’s sudden proliferation throughout global civil society since Human Rights Watch published its report Losing Humanity confirms the argument in my 2011 IO article that adoption by organizations central to issue networks account for why some catch on and others don’t. END_OF_DOCUMENT_TOKEN_TO_BE_REPLACED

Syria and the Politics of Prudence

According to the Washington Post, the Obama Administration is meeting to “reassess” US policy toward the Syrian conflict. Hezbollah’s intervention appears to have tilted the balance in favor of the Assad regime. Sectarian violence is on the rise. This has, naturally enough, led to hand-wringing about growing Iranian influence throughout the region.

Defenders of the Obama Administration’s foreign policy sometimes stress its general commitment to prudence and deliberation. John McCain and Lindsey Graham may call for ‘strong’ and ‘decisive’ US commitments at the drop of a hat, the argument goes, but the Obama Administration knows better. Except, of course, when it doesn’t. Or, perhaps, when the costs seem relatively low. As Michael Crowley observes (see also an old post of mine), “The unfortunate truth is that Obama didn’t intervene in Libya despite great risk. He did it because it was a relatively low-risk venture. Whatever you think should be done, the same can’t be said about Syria.”

The problem, of course, is that “prudence” and “deliberation” can translate into “hoping for the best.” This looks to have been the case with the Syrian civil war. If the Obama Administration considers gains by Hezbollah and Iran intolerable, then perhaps it should have adopted policies that took that contingency far more seriously.