Could the Youth Protests of the EU, Middle East, Turkey, and Brazil Spread to Asia’s Corrupt Democracies? 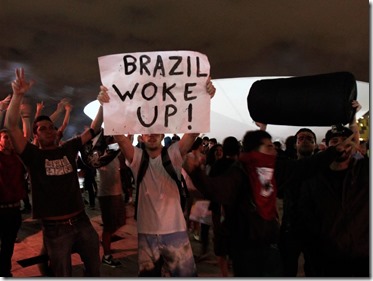 Jay Ulfelder and I had a Twitter conversation on this question in the last few days (here and here). But Twitter has such limited space, I thought I would break out our discussion on the blog and ask what others thought.

Watching all these riots – driven heavily by youth dissatisfaction, it seems – is making me wonder if this might spread to Asia’s democracies.

A lot of the problems these protests are identifying exist in spades in Asia: high-handed, out-of-touch governments; election-proof pseudo-technocracies that act as unaccountable oligarchies; shallow, clique-ish political parties that provide no meaningful transmission belt of citizen preferences; massive government and business corruption; wasteful white-elephant spending to capture global ‘prestige’ while everyday services like health care and education are underfunded; closed political opportunity structures that regularly reward insiders and large corporations with crony connections to the state; wealthy, de-linking elites with 1% lifestyles wildly at variance with the rest of the population… That’s Asia too; there’s more than enough sleaze to go around.

END_OF_DOCUMENT_TOKEN_TO_BE_REPLACED

The Whole of Government Needs a Game Changer

Here are some recent phrases that entered the policy lexicon in the last few years that I absolutely hate – “whole of government” and “game changer.” There is a faddishness to tropes in the policy arena that proliferate, that capture a certain sentiment of the moment that soon become over-used. Earlier, it was “tipping point.” I kind of hated that one too.

These words are useful short-hand. Ah yes, a game-changer, that which changes the game, a dramatic development that upends our understanding of what will transpire. Yet, strung together with other stock phrases, you end up with policy pablum. 2013 was a game changer, and now we are at a critical crossroads. We need a whole of government response to the events of recent months, which represent a tipping point in the events (in Syria, North Korea, Iran, Brazil, Turkey). Gag. We should be offended by such writing, as it demeans the craft of writing, turns policy language in to rote speech. END_OF_DOCUMENT_TOKEN_TO_BE_REPLACED