No Clone of Star Wars 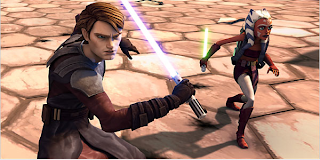 My son and I finally saw Clone Wars this weekend. Afterward, I went back through some of the reviews I’d been ignoring during the past month of moving and settling in. No one seems to think the movie was great, but people are disappointed for different reasons. David Germain of the AP writes:

You’ll know you’re in a different galaxy within the first seconds of “Star Wars: The Clone Wars,” which substitutes the Warner Bros. logo and theme music for the familiar 20th Century Fox searchlight and fanfare. Whether because of its cartoony format or its relatively lightweight story, “Clone Wars” definitely is not an event.

From the NY Times:

“Expectations were set so low by George Lucas’s lousy trilogy of “Star Wars” prequels that the latest from the Lucasfilm factory, a feature-length digital animation called “Star Wars: The Clone Wars,” comes as something of a surprise: it isn’t the most painful movie of the year!… No more than a pretext for exploding robots and light-saber duels, the plot concerns the efforts of Anakin Skywalker and Ahsoka Tano, his neophyte sidekick, to secure a fragile alliance by retrieving Jabba the Hutt’s baby son from the double-crossing clutches of Count Dooku, blah, blah, blah. Exploding robots!”

Well yes, this film was definitely made for children not grownups. Yet for what it was worth, I thought it not that bad. I may have been less critical because I saw it with my six-year-old, and therefore wore a firmly six-year-old mentality during the film: had I come as an adult, as I did to the prequels, I’d have been more disappointed. I also didn’t try to compare it to the other films – it was clearly designed to be of a different style and caliber: filler, really, to give depth to the often disjointed political story told in the other films. Yes, anyone who was hoping for special effects or character development at the level of the feature films will be let down. But here are three ways in which I thought this film actually exceeded the others in sophistication:

1. Gender Constructions. The original trilogy was ridiculously sexist, with Leia the only important female character, whose role is largely to serve as a big-breasted incentive for the boys to fight well. And in the prequels, though Padme starts off with some spunk, she morphs into little more than a waiting, weeping wife archetype by Revenge of the Sith, standing by lovingly while (among other things) Anakin commits war crimes and then abandoning her infants and her government to die of a broken heart. Women in these films are there primarily to inspire and validate the masculine heroes, and to provide eye candy for the audience. But in Clone Wars, we watch Anakin develop a reluctant but close and platonic bond to his young, wise-cracking female Padawan. Ahsoka combines multiple opposing gender archetypes by being a skillful warrior, a reckless neophyte, and a generous caregiver – the sort of Starbuck-esque female lead that is strikingly absent from the original movies. And then there is Asajj Ventress, Count Dooku’s assassin, who has her own history leading to the dark side and who gives Obi-Wan a run for his money. Watching male Star Wars characters relate to a female as something other than a prize to be protected was quite refreshing, particularly given the complex female characters in other science fiction media such as Firefly, Battlestar Galactica, and Star Trek: Voyager.

2. Battlefield Tactics. The prequels, and to some extent the original films, were heavy on grand political maneuvering and light on issues of logistics and tactical decision-making, but in Clone Wars we get to watch first-hand what every day life fighting an insurgency looks like (OK, it’s a cartoon version, but still…) through the eyes of a rookie Padawan wannabe, rather than through seasoned Jedi omnipotents who never mis-step. No, the fight scenes were nothing breathtaking; and no, not horribly instructive (I had to remind my son as we were leaving that in the real world, one would be rather out of breath after ten minutes of handfighting not to mention with broken knuckles), but there is something refreshing about watching day to day life in the military, in between grand appearances in the Imperial Senate. And it leaves one recognizing that half the story of Anakin’s obsession over Padme and subsequent fall must be chalked up to his status as a shell-shocked veteran experiencing various forms of PTSD.

3. De-Emnifying the Evildoers… At Least, a Little. One of the key breaks with the archetypal Star Wars narrative we see in this production is the humanization of (some) of the bad guys. In this case, Jabba the Hutt. Whereas we previously knew him as the quintissential nasty, greedy, good for nothing slime-ball, in this film we come to know him as a loving father. By getting to know and identify with his son, the innocent and helpless little Hutt-let with whose rescue Anakin and Ashoka are charged, we are reminded that even the bad guys have children, and that even a stinky little larva can be worthy of protection by honorable soldiers. This narrative chips away at the earlier good-and-evil, with us or against us, black-and-whiteness of the original Star Wars, which has always struck me as an extremely nationalistic, conservative narrative relative to its counterparts in other series’.

This is in some ways a continuation of Revenge of the Sith’s opera-house scene, where we begin to understand, through the tale of Darth Plagueis the Wise, that the Sith too have an ethical logic to their politics and are not simply evil. However, Clone Wars doesn’t take this too far… in the end, the Sith are the Sith, irredeemable, unstoppable, and beyond the pale. I wonder if in the CTV series this Fall some character development will take place among those characters at well, to shed further light on the complex motivations of the different sides in the war? One thing’s for sure… my son and I will be watching.