Recently, I criticized Sarah Palin’s pronunciation of “nuclear,” and suggested that electing her would only make Americans look as if we (still) don’t care how dumb our leaders appear on the global stage. At best, I expected a discussion about whether we should take such things into consideration in elections. More accurately, I expected that post to be ignored, and for most readers to latch on to the much more interesting food for thought to come in later posts that day. (Who would have thought English grammar would be more fascinating than the ethics of killer robots?)

Imagine my surprise to be introduced – by people I respect – to the theory that in fact, there is no one “correct” pronunciation of “nuclear”:

“I just can’t see this as a ‘correct’ or ‘incorrect’ matter. The English language is not a fixed thing but varies tremendous among geographical and social groupings.” – Dan Nexon

“I’m sorry but this is bullshit… Received pronunciation has nothing to do with… whether a used word is correct or not.” – Alex

“As someone who has consistently ‘mispronounced’ nuclear ever since I learned it from parents who mispronounced it, in a community which mispronounced it, I’ll have to agree with the previous commenter who called your argument ‘bull shit.’ How many accents to diplomats have to deal with every day?” – C. Hall

As a critical thinker, I take such claims quite seriously. It’s actually nice to be forced to think past my own biases. What if I’m actually wrong? What if there’s no correct pronunciation? What if I’m just exhibiting liberal, elitist bias, itself a sort of ignorance about the diversity of dialects out there in different communities of practice around nuclear science and policy?

Originally, I had written in the spirit of a frustrated citizen. Today, I write as a social scientist. On what ought to be the “right” pronunciation I now stand agnostic. But whether there is, in fact, a generally accepted pronunciation and a generally deplored pronunciation (as social facts) I can measure empirically.

Here’s a stab at doing just that. (It can be replicated much more systematically with a bit of time, money, and a team of student coders.) First, let us clearly state the question: is there a “normative” way to pronounce nuclear? (Not a right way. A way that exhibits the characteristics of a “norm” – a “collective expectation of the proper behavior of actors,” to quote Peter Katzenstein whose definition Dan Nexon cites in his famous blog post on international norms.) And the hypothesis: I hypothesize that the “normative” pronunciation is as it is spelled: “noo-clee-ar,” or its British derivation “nyu-clee-ar.” (Not because that’s the spelling. But because I predict people will behave as if that is the expectation in a measurable way.) The counterhypothesis is that the pronunciation “noo-kya-lar” enjoys the same or a greater degree of normative legitimacy (that is, is considered equally “correct.”)

One test of this would be practice: the frequency with which the two pronunciations are used among those engaged in “nuclear security” discourse. I would disconfirm my own hypothesis if I found that in a replicable sample of rhetoric, using replicable measures, speakers were equally likely to use either pronunciation. Today, in between panels at the NSF’s Human and Social Dynamics Annual Principal Investigator Conference, I tested this through an analysis of YouTube clips found using the search terms “nuclear security.” All were posted in the last two years, suggesting the results reflect current norms. I listened to each clip until the first use of the word “nuclear” and then coded the pronunciation, the title, URL and date (for replicability), and as much information as could be discerned about the national / regional background and professional affiliation of the speaker. Only the first word “nuclear” in each clip was used, for ease of replicability. In total, 25 observations were made before I ran out of time and energy. I excluded duplicates not only of the same clip but of the same speaker (so, for example, McCain is featured only once in the dataset). I excluded clips in languages other than English. I also excluded the video of Gorbachev’s interpreter because I couldn’t get it to load.

The remaining clips included all the rest that appeared on the first two screens of YouTube. This represents a sample of 25 out of a population of 1070; YouTube ranks them by “relevance.” These first, “most relevant” 25 include several clips of the Presidential candidates; journalists from the US, UK, Canada and Russia; analysts from Washington think-tanks; nuclear scientists; international diplomats and a comedian. They include speakers originally raised in the US South, MidWest, MidAtlantic and Northeast and Southwest. (Unfortunately none from the Northwest.) They include speakers from the U.S., Russia, England, Australia (I think), Canada (I think), North Korea and Iran. The results: 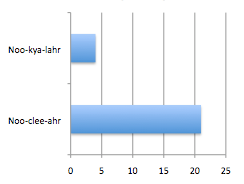 My dataset for those interested in replicating or supplementing (email me for the complete xls file):

This cursory analysis shows (I think – though bear in mind by this hour I’m slightly inebriated) that the majority of speakers in the sample pronounce the word as it is spelled. Within this (admittedly small and non-representative) sample, I found no variation according to US region. Although I had believed that speakers from the US South are likelier to use the pronunciation “nuk-ya-lar” (and several commenters also referred to “regional” dialects), in fact I found the spelled-pronunciation to be used by speakers from Georgia and Tennessee, as well as from the Midwest, Northeast, Mid-Atlantic, and Southwest.

Results are mixed, however, on whether the alternate pronunciation necessarily correlates with lack of knowledge about nuclear policy, as Alex Montgomery would have it, or on whether this usage is peculiarly American, as I had believed. Four speakers in my sample used the word “nukyalar.” We can, I think discount the political satirist (of unknown regional origin). The other three include only one one American: Senator James Imhofe (of Des Moines, IA). The other two “alternate pronouncers” are (I think) both non-American and at least one of them is clearly well-informed about nuclear policy: Australian nuclear energy expert George Collins, the chief of research at Australia’s Nuclear Science and Technology Organization.

So, one imagines that were this analysis continued on a much larger number of observations (there are 115,000 YouTube videos with the tag “nuclear”, and many of them contain more than one instance of a discrete speaker pronouncing the word) one might find an overwhelming majority using the spelled-pronunciation, but a population of alternate pronouncers that does not necessarily fit stereotypes.

Whatever it tells us in terms of a person’s qualifications on nuclear policy however, I can convincingly say that the use of “nukyalar” equals lack of fluency in (or willingness to adhere to) norms of nuclear speech. An even better indicator of this than frequency distributions of actual pronunciations is the reactions of third parties to the use of the alternate pronunciation, for as James Coleman reminds us, we know norms not by compliance, by the extent to which deviations from them are condemned by observers. Indeed, users of the “alternate pronunciation” are routinely lambasted by observers; the reverse is not true. If indeed both pronunciations were equally normative, one would expect to see another community of observers ridiculing those who pronounce the word as it is spelled just as often. I have found no evidence of this, though am willing to consider it if any of you have it.

Meantime, “M” suggests another possibility: that there are two sets of norms in two different communities of nuclear experts:

“I have long rolled my eyes at the “nuke-cu-lar” pronunciation. So, you can imagine my shock when I recently had the privilege of interacting with a number of nuclear weapons scientists and others associated with the US nuclear complex. The vast majority of them say “nuke-cu-lar”.”

Testing this would mean disaggregating the two communities; I’ve not done so here. This hypothesis could be tested by replicating the above analysis but replacing the search terms “nuclear security” with the search terms “nuclear scientist” or “nuclear engineer”; or, by gathering enough data points in that the number of nuclear engineers in the sample could be contrasted with the policy community in a statistically significant way. I am out of time today however, so must demure. I will point out, however, that in my sample, only 1 out of 5 nuclear scientists used the alternate pronunciation.

But in the meantime, these findings do, I think, suggest there is clearly a global normative pronunciation for the term, and a measurable opprobrium for those (many though they be) who deviate from it while expecting to be treated as smart, informed members of the global policy elite. Until I am convinced otherwise by something more than anecdotes and self-congratulatory statements from “alternative pronouncers,” I shall continue to advise my students to learn the conventions of the global policy elite. And I shall continue to hope for a President who defers to standard diplomatic convention.

P.S. I also checked whether in fact Palin had mispronounced “nukyalar” prior to the debate. She has, all along. So much for my theory that they prepped her to do this on purpose.

P.P.S. For those interested in YouTube and the US Presidential Election, check out this conference at my new institution.