UPDATE: The original version of this post was “Children and the Media.” It was basically a little tirade about the absence of genuine news media for children.

What was ironic about this post is that my rant was triggered by a visit to BBC’s website (upon following a link from BBC’s homepage to their “Children’s” page, I found primarily a bunch of games rather than substantive news for children):

“What a statement of contemporary assumptions about children’s role as citizens! It’s as if BBC thinks kids have no interest in current events or need for relevant, age-appropriate journalism. Too bad, actually. As 10-year-old Damon Weaver reminded us with his recent interview of President Obama, young people everywhere can be and are engaged in the events of the day, especially those that affect them (and what doesn’t?).”

However, as was pointed out in comments, BBC is actually one of the few “global” news organizations that do in fact produce news tailored to children, and has since 1972. However, you can’t find “Newsround” easily unless you grew up with it and know where to look – the BBC homepage doesn’t link to it (not even among its “32 languages; I don’t know, kid-ese seems like another language to me half the time), or from the “Children’s” page (mostly games); you have to go to the “Children’s BBC” page from the “Children’s Page on BBC” and even that includes only the Newsround icon (see – it’s that funny N down there in the corner), but if you aren’t already familiar with the icon that won’t help much. You won’t get far, for example, by surfing around in search of something that looks like the word “News” on the children’s page; or “Children’s News” on the homepage.

What did I learn from this experience?

1) I was wrong (and delighted to be so). If I want to get my kids interested in reading current events, BBC is actually setting a great example for the US news media. (Although, see here and here.) If there’s an equivalent of Newsround here in the States, I’ve never heard of it and neither have any of the parents I know (most had also never heard of Newsround). By contrast, to hear my commenters talk, Newsround is so ingrained in British culture that kids “presumably all recognize the logo.”

2) I was right. BBC is providing children’s news, but it’s also steering them (and parents like me) away from it in exactly the way I criticized in my earlier post. While we’re waiting for global news organizations to follow this example, BBC will fill that niche a lot more easily if it rethinks its new website design to emphasize news instead of entertainment for kids. It would be a simple matter, would it not, to treat the Newsround website as the children’s homepage, with games and activities embedded in Newsround itself? Instead, currently, games dominate the Children’s page, and Newsround is relegated to a tricky-to-find external section. (I don’t know about your kids, but mine would never make it past all the tantalizing drivel even if they knew what to look for; and I doubt many kids outside of the UK will “recognize the logo.”)

Architecture is governance. The packaging of information is as important as its presence or absence. It shapes our perception of what is available as well as our access; it shapes assumptions about what it is normal to want; and thus, it communicates and reproduces social values. Though I picked on the wrong news organization, my essential argument remains: too little thought is given in our culture to the idea that kids might be interested in the world around them, whereas enormous amounts of energy are spent turning them into consumers of entertainment and goods. This should be changed.

P.S. My original and now defunct post remains below the fold to remind me never to use this blog as a space for venting everyday frustrations without doing my research. Sorry, BBC.

On BBC’s recently revamped website, I noticed this morning a link to “Children” which I assumed would be a webpage devoted to getting children interested in the news and current events through coverage of topics related to them. Instead I found this: 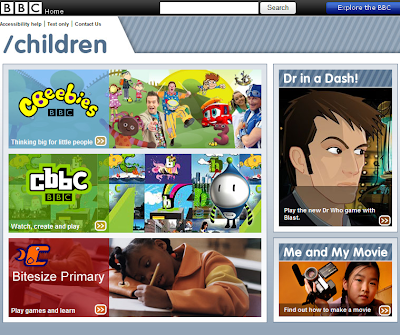 What a statement of contemporary assumptions about children’s role as citizens! It’s as if BBC thinks kids have no interest in current events or need for relevant, age-appropriate journalism. Too bad, actually. As 10-year-old Damon Weaver reminded us with his recent interview of President Obama, young people everywhere can be and are engaged in the events of the day, especially those that affect them (and what doesn’t?).

Here are other examples of news stories involving children that might have appeared on BBC’s “Children” page, were it structured to take children’s intelligence seriously rather than to provide cheap and low-quality entertainment:

1) Picking Tobacco is Bad For Children: “THOUSANDS OF child labourers working as pickers on Malawi’s tobacco plantations are exposed to nicotine poisoning equal to smoking 50 cigarettes a day, an international children’s rights group said yesterday. Plan has called upon Malawi’s tobacco industry to vastly improve working conditions, and the government to ensure existing child labour laws are enforced in full.”

2) Study Confirms Universal Health Care for Children is Good For Society. “In June, Rice University’s James A. Baker III Institute for Public Policy released “The Economic Impact of Uninsured Children on America,” a new report whose bottom line is that extending health insurance coverage to all children in the United States would be relatively inexpensive compared to the cost of letting children remain uninsured and would yield economic benefits that are greater than the costs.”

4) Stressed Out Families? Too Much Work, Not Too Many Children, Is the Problem.“Families in which both partners work long hours are more stressed than others, but the addition of children doesn’t seem to have much impact on stress levels, according to a new report from Statistics Canada.”

5) African Children’s Choir on Tour in the Pacific Northwest. “The critically acclaimed choir, whose members are drawn from impoverished African communities, has performed for dignitaries such as President George W. Bush and former U.N. Secretary General Kofi Annan, and strives to raise awareness of the plight of children on the African continent.”

And children are not just interested in news about children. BBC and other news outlets could take a hint from efforts by children’s websites like Pitara, which include a round-up of world news written in language kids can understand. Still, how much more accessible such news would be if it came to kids through the media machines their parents rely upon for daily reports. And how much more engaged children would be in our society if this were the case. And, perhaps, how much more responsive adults would be to children’s needs if it were taken for granted that their informed voices were a legitimate part of our national debates.

On the other hand, never mind. All this keeping up would just distract our budding electorate from more important things like Suite Life on Deck and the Honesty Box.