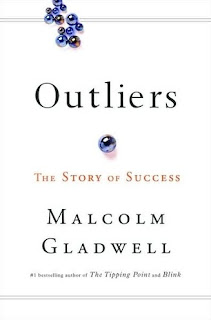 I have just finished reading Malcolm Gladwell‘s latest book Outliers. For those who haven’t picked it up, yet, the key thesis is that extraordinary individuals are actually not extraordinary as individuals, but simply happen to be the lucky beneficiaries of chance, opportunity and social structures that unwittingly favor some over others by accident of birth – in ways we seldom recognize and even more seldom legislate to balance out.

Bill Gates? Not a genius, just one of the lucky kids who by random chance happened to have access to an early computer terminal in the 1960s, giving him a leg up on the computer revolution. Gifted athletes? Most of them just happen to be born between January and March, helping them benefit from the arbitrary cut-off dates associated with sports league eligibility – kids with those birthdays will always be a little stronger and faster than those slightly younger than them lumped on the same team, and this will translate into a slight advantage at first, compounded over time by the validation and extra sports opportunities that their perceived “giftedness” relative to their “peers” earns them.

Gladwell’s book is full of interesting anecdotes about how random circumstance (rather than either individual merit or overt discrimination) accounts for people’s success at math, computers, social relations, finance, even at landing airlines safely. But the study that most caught my eye is toward the end of the book, when he explains why long summer vacations (a peculiarly American invention) may be at the root of our education crisis – and in fact do more than anything else to explain the learning gap between wealthy and economically disadvantaged kids.

Gladwell cites research by Johns Hopkins sociologist Karl Alexander, who studied test scores among Baltimore elementary-schoolers by income level, and how they changed throughout the school year, and again between spring and fall. Although the oft-cited “achievement gap” appears to suggest that high-income kids do better in school overall, Alexander shows by disaggregating scores between September and May and scores between May and September that low-income kids actually do as well or better than their peers during the school year.

“Virtually all of the advantage that wealthy students have over poor students is the result of differences in the way privileged kids learn while they’re not in school.”

What Alexander’s work suggests is the way in which education has been discussed in the United States is backwards. An enormous amoutn of time is spent talking about reducing class size, rewriting curriculua, buying every student a shiny new laptop and increasing school funding – all of which assumes that there is something fundamentally wrong with the job schools are doing. But the problem with school, for the kids who aren’t achieving, is that there isn’t enough of it.

Well, I don’t like Gladwell’s comparison to the Asian model of up to 243 school days a year, or other recent calls to get rid of summer vacation altogether.Summer vacation is a good thing, if only because kids need some downtime, and it gives parents who can afford it an opportunity to be more involved in structuring and selecting their children’s learning opportunities along lines that suit the kids’ and parents interests. (I know summer is really the only time my kids get to explore a variety of extracurricular pursuits there is simply no time for in a heavily regimented school year or to travel.)

The issue is about how to make sure that these opportunities are not solely dependent on the free market. How could we as a society ensure that every parent, regardless of his or her wealth, had access to a menu of non-formal schooling and travel options for their children during summer vacation?