“In Chess, Why is the Queen More Powerful Than the King?” 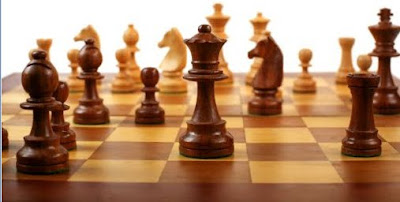 My son asked me this very rich question during a chess game about a week ago. Indeed, the distribution of power among the royalty on the chess board is the reverse of the gendered logic documented by feminist theorists of the state.

In chess, the queen has mobility (the crucial barometer of power in the game) but less value, as the game can continue without her; the hobbled king is relatively powerless, but is the most valuable piece without whom the game ceases. In actual politics, the situation is reversed: women’s relative lack of access to political and military power and even social, economic and physical mobility is sometimes justified and at any rate partly explained through their greater perceived value compared to men for reproductive and symbolic purposes.

Pleased though I was with my son’s ability to recognize this contradiction, it took a week of digging to actually find an answer. Turns out Marilyn Yalom has written a brilliant little book about this very this paradox and how it came to be: The Birth of the Chess Queen. In her introduction, she asks:

“How did [the chess queen]come to dominate the chessboard when, in real life, women are almost alway sin a position of secondary power? What is her relationship to the other chessmen? What can she tell us about the civilization that created her?”

Reading on, one learns three fascinating parts of the answer.

First, the chess board once lacked a queen altogether: in India, Persia and the Arab crescent, early chess included only male figures, the closest thing to the queen being the “vizier.” Yalom argues the appearance of the queen on the board coincided with the Arab invasion of Europe and the Christianization of the game as it took root in lands dominated by the idea of a woman as help-meet to a Christian king.

But second, the early queen was far from the icon of power she is today. Indeed, according to tenth century chess rules, the queen is second only to pawns in her abject powerlessness on the board – able to move only one step diagonally in any direction (less power than today’s king). While my son and I have had much fun attempting to play by tenth century rules (which include the knight’s final step moving on the diagonal), the question remains: how did the queen become so powerful? Yalom relates this to the importance of a series of strong European queens during the ensuring centuries.

So the queen was born of the gender politics associated with the clash between Christianity and Eastern cultures; and gained power in concert with traditions of queenly rule in Europe. But this doesn’t explain the other side of the coin: why the chess king is so vulnerable relative to his counterpart – so (one might say) feminized? Queens may have had greater power in Europe than in other parts of the world, and chess may have been a site for using gender as a cultural marker for civilizational identity, but queens hardly displaced their husbands and fathers as the loci of political authority. Perhaps the chess king’s vulnerability reflects the perception of many men surrounded by strong females that women actually hold the power, even if it’s not wielded through the sword.

Or maybe chess has simply not caught up (yet) with historical shifts in gender relations in the family and political life. Imagine a set of chess rules where the king and queen function as partners – equally powerful and equally valued – each dependent on the other for protection. The goal of each army would be to defeat both; either king or queen could fight and be “taken,” but once one partner is lost the other would revert to the vulnerability of the contemporary king, as it is the strength of the union from which their power is derived.

My son and I will shortly be beta-testing this chess system and invite faithful Duck readers to join in our little experiment and leave feedback in comments.