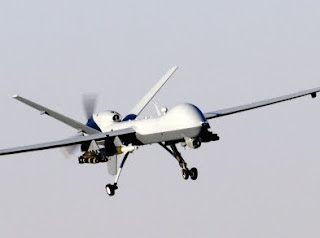 Peter Bergen and Katherine Tiedemann published an analysis at the New America Foundation a couple of days ago on civilian deaths from drone strikes in Pakistan. Key points from the callout on the site:

“The Obama administration has dramatically ratcheted up the American drone program in Pakistan. Since President Obama took office, U.S. drone strikes have killed about a half-dozen militant leaders along with hundreds of others, a quarter of whom were civilians.”

Actually, the call-out understates the percentage of dead civilians: if you read the piece it looks like the study shows civilians comprise actually around 33% of those killed in drone strikes. That’s a third, not a quarter, folks.

Three other quick reactions below the fold, and more once I’ve had the chance to crunch some numbers of my own.

1) It’s good to see a measured analysis of collateral damage from drone deaths, since the numbers are wildly over or underreported by the parties to the conflict. Their Methodology is here; the Appendix with their data is here. We need some tracking like this for collateral damage at the global level. Unfortunately most studies of civilian deaths either aggregate all civilian deaths or focus on intentional deaths which are war crimes. It’s hard to know what percentage of all civilian deaths and injuries are “collateral damage” of this type, but it would be useful to ignite a policy discussion about acceptable levels of damage.

2) This goes to a second point of the article: the shaky legality of drone strikes. Unlike willfully targeting civilians, accidental harm to civilians is permitted by the law, as long as it’s proportionate to the military gains achieved by these strikes. So, does hitting militants in civilian areas constitute a “proportional” means of attack if you know approximately 1/3 of your victims are civilians? To me this seems unreasonably high, particularly since the drones are justified on the basis that they are more discriminate than other weapons systems. In legal terms, the problem is there’s not an internationally-agreed-upon means to judge proportionality. I wonder how Duck readers would answer this question.

3) Ethics aside, a related point is the political impact of so many civilian deaths, which has made US drone policy quite unpopular in Pakistan, even among those who would prefer the Taliban be driven out of the Federally Administered Tribal Areas; and they provide militants with ready-made propaganda fodder. Bergen and Tiedemann write:

While there is little doubt that the strikes have disrupted al Qaeda’s operations, the larger question is to what extent they may have increased the appeal of militant groups and undermined the Pakistani state. This is ultimately a lot more worrisome than anything that could happen in Afghanistan, given that Pakistan has dozens of nuclear weapons and is one of the world’s most populous countries.

Given that President Obama has expanded this drone program in the FATAs since he took office, it’s probably time we had a discussion of the costs and benefits, in human security and national security terms.