Earlier I blogged about the importance and absence of data disaggregating unintentional civilian deaths from total civilian deaths in wars worldwide. To get a preliminary handle on this question, I examined a dataset on civilian victimization developed by Alexander Downes at Duke University for his study on why governments target civilians in war. His dataset includes 100 interstate wars and runs from 1823-2003. It includes low, medium and high estimates for the number of civilian deaths for each party in each conflict, based on available secondary sources. It also includes a separate binary variable for whether there is evidence that governments targeted civilians directly. His not uncontroversial methodological appendices are here. Wars are coded as including evidence of intentional civilian victimization if hostilities included indiscriminate bombardment of urban areas, starvation blockades or sieges, massacres or forced relocation. Civilian deaths in wars not using these techniques can be roughly assumed to be unintentional, or “collateral damage.”*

The ratio of collateral damage victims to war crimes victims has dramatically increased since the end of the Cold War. According to Downes’ dataset, between 1823 and 1900, unintentional deaths constituted 17% of all deaths in war. Since 1990, that number has risen to 59%. 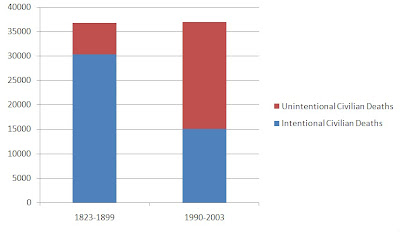 In other words, the majority of civilian deaths since 1990s have not been war crimes but have been perfectly legal “accidental” killings. Of course this could partly be a result of a decrease in direct targeting of civilians over time, which would be a good thing. 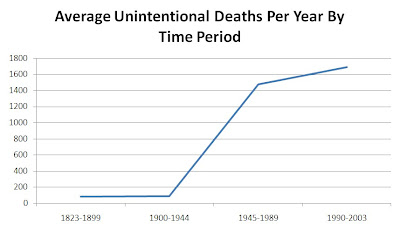 So it’s not just a question of collateral damage staying constant while war crimes drop. According to this data, at least, collateral damage is actually taking many more lives than ever before – despite purported increases in precision munitions.

What does this all mean? First, because this cut at the numbers is so rudimentary and so based on data designed to track actual civilian victimization rather than collateral damage, it seems crucial to gather some genuine data on the actual problem. Human rights and humanitarian law organizations should launch cross-national studies aimed at determining the actual numbers. They should also regularly disaggregate their civilian casualty data into intentional v. unintentional in their reporting.

But if these numbers are anywhere close to correct (and I suspect if anything they are conservative) this analysis suggests an urgent need for a rethinking the laws of war designed to protect civilians. In the 1970s, when the [added: Additional Protocols to the] Geneva Conventions were hashed out, a key concern of governments’ was to protect civilians from intentional attack. War crimes are dropping in part because international laws against targeting civilians are working. Collateral damage is increasing in part because of the absence of such clear-cut rules. It’s time for this to change.
___________________
*It’s a crude measure because in any given conflict, some civilians may be targeted directly and others may be “collateral damage;” but collateral damage counts here show up only for wars in which there was not also intentional civilian victimization. The data is also limited to interstate wars. But assuming Downes’ data is more or less accurate, we can derive a very conservative set of collateral damage numbers by tallying all civilian deaths for each war in which the state killing civilians was coded as not having done so intentionally. (I used the mid-level estimates in the dataset).