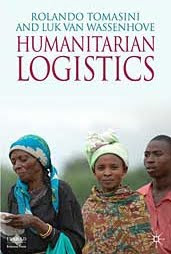 First, as posted at LGM, I predict this book is going to sell a whole lot of copies this year. Unlike many ongoing crises that suffer from lack of aid money, in Haiti the relief lag we are seeing is due not to compassion fatigue (text message donations surpassed $10 mil today, equal to the amount pledged by Brazil or Switzerland) but rather to sheer logistical strain caused by poorly built or now-destroyed infrastructure.

(You simply can’t offload supplies from ships without dock cranes. You can’t land planes full of relief shipments and inflatable hospitals without a functional control tower. To save lives, search and rescue crews must get their equipment from tarmac to disaster zone efficiently. Helicopters need landing zones not decimated by rubble. And most importantly, military folks with the choppers need to be able to communicate with the civilian aid agencies who have the supplies.)

A lesson for human security specialists may be: is some level of international governance over basic infrastructure going to be necessary to resolve coordination problems like this in the future? There’s a lot of talk in the MDGs about development aid for food, vaccinations, school supplies, but how about for construction of roads, ports and control towers that can withstand natural disasters? This would seem to be a prerequisite for effective civilian-military response in such scenarios. An international community that can trace nuclear materials or close an ozone hole could establish and implement such standards if it chose – half the problem is lack of political imagination.

Second, my bet is the US military is thinking hard about what its prominent (yet inevitably sluggish) role in this disaster means for its maritime force posture. Climate disasters like this may become more prevalent and the humanitarian fall-out presents security risks if they occur in areas near US borders; the US is positioning itself as a global humanitarian hegemon bent on rebuilding nations ravaged by state failure and disaster. All this has important implications for naval readiness as well as strategic communication. Galrahn at Information Dissemination made a cogent set of points in this regard:

There have been 3 Admirals on C-SPAN in the last 6 months, and only once was it on an issue related to the sea – that was the BMD change. Every other time you see an Admiral on C-SPAN it is Mullen or the topic is prisoners at Guantanamo Bay. The media is focused on Haiti, and the symbol of American power is going to be the largest thing everyone can see – USS Carl Vinson (CVN 70). Be visible, take pictures from the air that include the carrier, and turn USS Carl Vinson (CVN 70) into a symbol of hope. The Navy doesn’t have a single Admiral actually in a Navy post today (which means Stavridis and Mullen don’t count) who is recognizable by the average American, but every American knows what a Nimitz class aircraft carrier looks like – as does the rest of the world. Showcase the ship, because it is a symbol and symbolism matters in soft power. The whole world is watching.