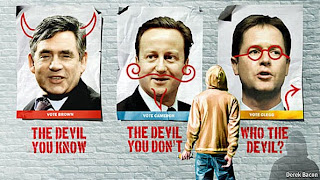 I’m planning on writing a larger post on the topic after the Second Election Debate tonight – particularly since it is going to be about UK Foreign policy (and, in theory, more or less related to the topics of this blog…)

In the mean time if you haven’t been paying attention, the election has basically exploded into interestingness in the last week. The First (ever) Leader’s Debate basically jump-started the election in a way that I (and I suspect most people) never anticipated. Tonight’s debate is now pretty much mandatory watching.

The short version is that the third party candidate, Liberal Democrat Leader Nick Clegg (the guy I wrote about last week and said no one expected to win except Howard Dean) has surged in the polls after an impressive performance. While I wouldn’t call him our “White, tea-drinking, private-school-educated Obama” yet, he has shaken up British politics in a BIG way and has possibly changed the electoral map of Britain in the meantime…. if he can stay on in the polls. If you don’t believe me about “Clegg-mania” (no really, that’s what they’re calling it) – check out the polling insanity – and the effect it could have on the seat distribution here.)

In the meantime, for those of you who have access (I assume they are showing it on BBC World – and apparently CSPAN 3 – how’s that for a prime tv slot!) I highly recommend the LSE’s Election Blog. Chris Brown has a good backgrounder on the Trident Nuclear system which is up for renewal – and sure to feature in tonights debate.

As for me, I’m loading up on my cheese and onion flavoured crisps and a few pints of Old Speckled Hen to hopefully watch the sparks fly tonight.

(Who am I kidding… it’s always rice cakes…)