What ISA Can Learn from Small Niche Conferences 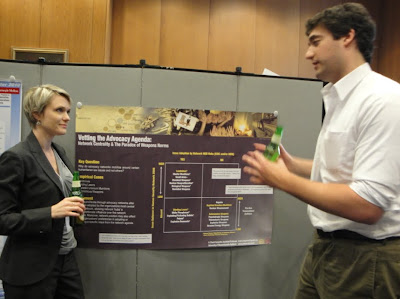 What you see on the board in the picture is the visual description of my latest research article on weapons advocacy, which will be out later this year in International Organization. Also in the picture are yours truly and Duck co-blogger Drew Conway hob-nobbing. Those things we’re waving around as we talk? Yuengling beers. This took place earlier this week at the Networks in Political Science conference at Duke University, and the nature of this poster session at this friendly, fun niche geek-fest has something to teach conference organizers in big associations like ISA and APSA.

Here’s the lesson: poster sessions should be incorporated into section receptions rather than warehoused in a lonely corner of the conference hotel competing with happy hour. I have done poster presentations only a couple of times in my entire career, mostly because in the mainstream associations they are depressing, low-output affairs that are thought to signal academic loser-hood since “you didn’t make the panels.”

Organized properly however, a poster session can be far more rewarding than a panel presentation. Visualizing one’s argument draws on a different and useful set of skills; discussing it verbally one on one in iterations is a far more useful way to get feedback; plus there’s a networking element associated with this type of exchange that greatly exceeds the types of interactions that occur on a panel presentation.

But the problem is that poster presentations need to draw an audience in order to have this effect, and the way they’re organized at large conferences often does the opposite. Three tricks seem to make a difference:

1) minimizing the number of presenters available at a time
2) making sure the posters all revolve around a specific theme and
3) making the event festive (an open bar is ideal).

At niche conferences, one and two happen easily and I’ve seen the “Poster Session Happy Hour” model work splendidly at more than one conference. (If you throw in a cash prize for “best poster” that works well too.) ISA is not a niche conference but could approximate these kinds of gains in the popularity and value of posters by asking the organized sections to incorporate posters into their section receptions. International Security Studies Section folks could drink and hob-nob among visualizations of COIN or nuclear proliferation; next door Human Rights Section members could get their dark genocide jokes on over beer while perusing the latest visual research on Darfur, sex trafficking or drone war ethics. I think this approach would heighten both interest in the receptions and in the posters, and I for one would stop turning down poster presentation opportunities at the big hubs if they switched to such a model.

Other things I learned while at this conference:

1) Network analysts form networks in pretty predictable ways, even though they know enough about networks to be more inventive. This made participant-observation at the conference wine reception a particularly interesting exercise.

2)The WaDuke Inn and Golf Club has probably the most outstanding customer service of any place I’ve ever stayed (and I spend about 1/3 of the year traveling so this is not small praise). Especially if you like bacon in just about every dish.

3) In terms of involvement in the three conferences held by the group since 2008, IR is the most under-represented and recidivist subfield in the Networks in Political Science group, which now has the status of a Section in the American Political Science Association. (Not entirely sure I know why, although Hafner-Burton, Kahler and Montgomery are right that IR folks have been slow to make use of SNA tools – but it could also just be that many IR folks prefer ISA over APSA.) Mathematicians, however, appear at a glance to be well represented in the organization (and highly mathematical formal modeling papers were, from what I could see, over-represented on the panels).

4) Social network analysts have a hard time wrapping their brain around research (like mine) that incorporates and test hypotheses from network theory using non-network-analytic methods (like case studies or elite interviews). However the group is actually intended to be inclusive of both network analysts and network theorists of other sorts, so if you’re working on networks but don’t have the quant background don’t let that put you off: I’ve found this is a great place to be and to learn for scholars who are doing more applied work on networked communities of practice.

5) Billy Mitchell was beat last year and I didn’t even know it until Google reminded me about Pac-Man’s birthday. Also, target shooting in a gun-friendly state is a great way to spend a final afternoon before heading home.