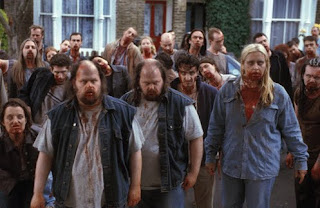 Daniel Drezner has expounded on his seminal “Zombies and IR” blog post
with a full spread on the topic in the July/August Foreign Policy:

The specter of an uprising of reanimated corpses… poses a significant challenge to interpreters of international relations and the theories they use to understand the world. If the dead begin to rise from the grave and attack the living, what thinking would — or should — guide the human response? How would all those theories hold up under the pressure of a zombie assault? When should humans decide that hiding and hoarding is the right idea?

What follows is an attempt to satiate the ever-growing hunger for knowledge about how zombies will influence the future shape of the world. But this is a difficult exercise: Looking at the state of international relations theory, one quickly realizes the absence of consensus about the best way to think about global politics. There are multiple paradigms that attempt to explain international relations, and each has a different take on how political actors can be expected to respond to the living dead.

Drezner’s treatise is already being referred to as the cornerstone work of “zombie theory” akin to other foreign policy crazes such as “cybersecurity” or “counter-terrorism.”

As such, therefore, it’s interesting to note that this summary of relevant IR “theory” turns a half-eaten blinded eye to a whole range of the perspectives that might be presumed useful to comprehending this emerging transnational threat. Would not post-colonial theory help us understand the unique Haitian approach to the zombie menace? Would not constructivist IR theory contribute a more nuanced understanding of the power relations required to make the zombie community hang together, and the cultural reasons for the abject neglect of the such non-traditional threats by policymakers thus far? Would not IR feminism attune us to the impact of marauding zombie mayhem on zombie women and children, to say nothing of usefully deconstructing the gendered narrative about threats-of-the-flesh that underpins the popularity of zombie hysteria? (I hungrily await Laura Sjoberg’s take on Drezner’s piece.)

Then again, this is Foreign Policy, and I suspect behind this article is an interesting and humorous back-room story about the ever-contentious process of translating academic theories and jargon to a beltway audience – a process that often takes the bite right out of IR theory.

What Drezner conclusively shows, however, is the urgency with which security specialists must sink our teeth into this body of uncharted research. Hint, hint, National Science Foundation and DoD Minerva Project: a new Cross-Cutting Program on Zombie-Human Social Dynamics?