UN Passes “Right to Water”: Diplomacy everywhere but not a drop to drink. 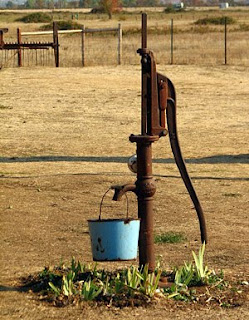 Yesterday the General Assembly passed a non-binding resolution declaring “the right to safe and clean drinking water and sanitation as a human right that is essential for the full enjoyment of the right to life.”

The vote passed with 122 countries voting and 41 countries abstaining, including United States, Britain, Canada, Australia – but also other nations like Botswana and Turkey. On the other hand, China, Russia, Germany, France, Spain and Brazil backed the resolution.

This vote comes after many years of debate. Water, increasingly seen as a strategic issue and a natural resource, is not something that countries with large amounts of fresh water (I’m looking at you, Canada) want to be obligated to part with under international law.

But the idea that water is a fundamental right is something that the UN has been working on for some time. In 2003, the WHO published an argument in favour of enshrining such a right. Their argument follows that a right to water is largely inseparable from a right to health and a reasonable standard of living. Additionally, defining water as a “right” was seen as having the has the following advantages:

In other words, establishing a “right” means that there will be the ability to claim that right and demand that someone act upon it. Further arguments in support of the right to water by leading proponent Maude Barlow, (who calls it the “most violated right”) can be read here.

A couple of observations on this development:

First of all, I think it needs to be said that not having clean water and poor sanitation is probably an undisputable bad thing. That individuals in poorer counties are forced to drink contaminated water in this day and age is pretty much a terrible tragedy.

Additionally, while realists or sceptics may argue that defining something as a “right” in international law will basically have little to no impact, recent work by Beth Simmons suggests that this may actually not be the case. Simmon’s recent work on human rights treaties and documents demonstrates that where the possibility to organize exists (even in repressive countries) the human rights situations of some countries measurably improves.

This “right to water” approach also seems to reflect a “Basic Rights” approach advocated in the 1970s and 1980s by those (such as Professor Henry Shue) who argued that it was not very useful to divide rights up into “political” and “economic and social” but rather to think about, literally, what basic rights human beings need for survival. It’s all very nice to have the right to freedom of speech, but if you’re dying of thirst it’s not particularly useful.

So, acknowledging the general tragedy of the situation and the fact that change may actually result from this (although more thoughts of the international legal aspect of this below), what are we left with?

I should say that after about 30 minutes of trying I cannot, for the life of me, find the text of resolution (A/64/L.63/Rev.1) on the internet. I’m assuming that it will be online later.

However, an accounting of the vote is available here. The major objections seem to be:

(For those that are interested, UNDispatch has the full US argument here.)

What also seems to be the case is that there is a parallel process on going in Geneva where there is an Independent Expert currently undertaking research in this area. This vote occurred before that expert could report.

However, it seems clear that states are opposed to the idea that human rights can be drafted in non-binding General Assembly resolutions. (In this sense it is interesting that there is so much commentary on the failure to achieve consensus. States who voted in favour regret that consensus could not be achieved and those who voted against seem to argue that the resolution was drafted and pushed through in such a way that consensus was impossible.)

Also, there is the obvious concern over sovereignty and sovereignty over resources that the Canadian representative (no surprises there) seems to be getting at. Is there an obligation for states with lots of fresh water to provide it for free to states with little?

Incidentally, my favourite statement in the whole description of the vote was that given by the Albanian Representative who stated “he had not been present for the vote and wished to place on the record that he would have abstained.” Hope it was a nice lunch then.

There is much that could be said about consensus vs voting, “rights based development”, non-binding resolutions in the General Assmembly, etc. But this is already a long post. So I’ll just leave it to listing some questions that I have, and hope that some will be answered when I do eventually get to read the text – or in subsequent international debate over the issue.

First – what about cases where states are responsible for polluting their own water? China has basically turned many of its own rivers into toxic, stinking, flowing masses of chemicals through its industrial development and poor monitoring of environmental degradation. Is there an obligation to provide water to nations that have acted irresponsibly? Or to nations that refuse to take steps to improve their own sanitation?

Second – It seems as if the resolution is not clear as to who is responsible for providing this ‘right’. The ‘emerging norm’ of the “Responsibility to Protect” makes it clear that states are responsible in the first instance. This is the long standing position of China, Russia and virtually all of the Non-Aligned Nations. So does this count for water too?

Fourth – (and this is more of an observation) in terms of international law this technically does not have much sway. Unlike the human rights treaties that Simmons is concerned with, it’s a non-binding General Assembly Resolution that does not have any enforcement mechanisms nor can it be said to have received overwhelming support. But there will be little doubt that humanitarian and NGOs will use this as evidence of an “emerging norm” regarding the obligation to provide clean water. And it is also clear that states are concerned about the emergence of such a ‘right’ – wherever and however it develops.

EDIT: Friend and very cool guy Jeremy Youde has provided me with the link! The text of the resolution is here. It is pretty short – consisting of three main points. In this sense I can see why there was some concern over the ‘scope’ of the right. It simply states that there is a right but does not specify who is to provide it or what may be required of states. The only indication is calling upon states to help provide better assistance… but as Jeremy points out in his comment, it does not state what happens if the water is not there to begin with.