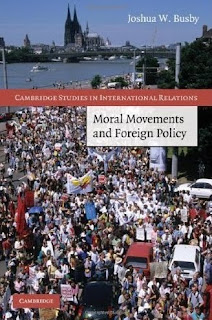 Joshua Busby has a new book out on transnational campaigns that might be the best new contribution to the advocacy networks literature since Keck and Sikkink’s original Activists Beyond Borders. In Moral Movements and Foreign Policy, Busby proposes a theory of the conditions under which such movements succeed at securing commitments from states:

Whether states accept commitments made by principled advocacy movements depends primarily on how three factors conjoin: 1) the balance of material incentives facing states, 2) the cultural resonance of the messages and 3) the number and preferences of policy gatekeepers. States will support moderately costly actions against their material self-interest when the issue is framed to fit with the country’s values and when policy gatekeepers personally consider these attributes important.

The story Busby tells about the sources of such frame resonance are perhaps most interesting. Drawing on a variety of older literature as well as his casework (climate change, HIV-AIDS, the ICC and debt relief), Busby emphasizes not only ideational messages themselves but also the attributes of messengers as a constituent part of a successful or unsuccessful frame. This is borne out as well by preliminary findings from my focus group research in the human security area: practitioners often argue that the attributes of the entities pitching new ideas impact the likelihood of those ideas being “picked up” in global civil society.

Besides the argument and the cases, another contribution of the book is the conceptual precision Busby brings to bear – distinguishing political from policy successes, state interests v. the micro-motives of individual politicians, issues v. campaigns. But he leaves a few questions open – such as how “policy gatekeepers,” targets of advocacy influence within governments – are analytically distinct from “advocacy gatekeepers” such as those outlined by Clifford Bob and his collaborators in their study of how ideas flow through advocacy networks. Are these two distinct forms of gate-keeping power or simply differently positioned actors at different points in the advocacy chain?

Also, one small quibble: in focusing only on “principled advocacy networks” rather than wider forms of contentious politics, Busby’s framework refies an old and somewhat suspect distinction between “strategic” v. “principled” activity. But Susan Sell and Aseem Prakash’s research on intellectual property rights shows that firms and NGOs are not so unalike in either their motivations or their strategies: all organizations need to survive and surely some of the dynamics that occur between advocates and policy gatekeepers reflect the political economy of resources as well as ideas between states and NGOs.