“I Don’t Care What You Believe In, Just Believe In It.” 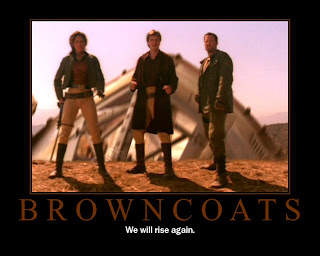 Although reports that he is insufficiently feminist appear to have been exaggerated, Joss Whedon does appear to be insufficiently Browncoat. Or so it would seem since he recently blocked the first fan-based effort to acquire the rights to a television series by nixing Unstoppable Signals’ movement to revive Firefly, the one-season hit space western whose film sequel Serenity just beat out The Empire Strikes Back for Best SciFi Film of All Time at io9.

(If you need more background on the show and its connection to post-9/11 global political culture, start with this and follow the links.)

This latest fan effort to resuscitate the show was sparked after lead actor Nathan Fillon stated in an Entertainment Weekly interview:

”If I got $300 million from the California Lottery, the first thing I would do is buy the rights to Firefly, make it on my own, and distribute it on the Internet.”

Fillon, whose character Malcolm Reynolds is an archetype for outside-the-box machinations against government or corporate powers that be, quickly became an icon for Firefly fandom’s guerilla marketing bloc, who interpreted his dream as a cause and his words as a call to action. A Facebook page was established to gather pledges for a “Buy Firefly” fund in anticipation of the new Fillon-produced show and quickly attracted over 116,000 members and more than $1 million in pledges.

It also attracted some derision by those who thought the idea was a waste of money and time, not least by Fillon himself, who quickly retracted his statement and asked fans to donate to his favorite charity instead, Kids Need to Read. Browncoats took this seriously and many sent money they had planned to pledge to the show to KNTR and well as a variety of other charities. They also hatched a new plan: rather than raise the money for Fillon, they would aim to buy the rights to the show themselves:

Call it what you want… democratic entrepreneurialism, populist production or just plain crowdfunding, we believe it is possible to create the first film company that is owned by the fans and for the fans. And why not? The many are mighty.

But in early March Joss Whedon’s sister, claiming to speak for Joss, tweeted

Guys, no one in the Whedonverse is in support of www.helpnathanbuyfirefly.com. Please save your money!

Tancharoen later amended her statement with a longer message, stating that there were no hard feelings from the Whedon clan, but Joss and Co. weren’t comfortable with fans trying to take direct control of the Firefly rights, and even less with them collecting real money to do so.

In a disappointed show of deference, pledge collections for HNBF shut down and the fans began directing actual donations toward additional charity efforts instead. These have included design contests and merchandise sales to benefit a variety of organizations including the Marine Corps Law Enforcement Foundation, the Dyslexia Foundation and Equality Now. However they also continue to explore the idea of crowd-sourcing fan productions of other TV series’ “to address a genre that is plagued by unjust cancellations and complaints of low profits despite its unimaginable importance to our cultural fabric.”

While Whedon’s position is certainly understandable from a copyright perspective, one must note the irony: this notion of “people’s control” over objects of art is perhaps the logical culmination of the very political sentiment promoted by the show Firefly. And the humani-liber-tarian spirit in this comments thread, collecting fan ideas on moving forward is a fair bit, well, mighty. (At least in one sense of the word.) I especially liked this one:

Firefly seems to appeal to people with a soul. I don’t mean nuthin’ with any religiosity, I just mean folk who got more’n a passing interest in the fortunes of other. Build the good works into the fandom-related activity whereby we sit around the campfire enjoying our collective appreciation through story, and song, and craft. But at the same time, we pass around a cup and do a little takin’-up for those who ain’t so lucky.

And when the morning comes, get our gear on and set out for places what have the aforementioned folks-in-need. Show the world that we can do more than just get frothy on the internetz. Show them that a bunch of shiny people maybe can’t make a big ole difference against all the misery out there … but we sure can try just the same. Like vinyahuinewen said, let’s be Big Damn Heroes.

Beats sittin’ around grumbling about how rotten the world can be.

“I don’t care what you believe in, just believe in it.”