Niall Fergurson, International Many of History

Michael Lind treats Niall Ferguson to the contempt he so richly deserves (via). A sample:

The right-wing British historian Niall Ferguson seems to have conquered America: pushing his latest perishable book, “Civilization,” this one based on the trendy and quickly dated conceit of the six (or is it seven?) “killer apps” of Western civilization; writing cover stories for Newsweek; debating foreign policy on TV with Zbigniew Brzezinski; and pouting and snarling his way through a debate about economics with Paul Krugman, Jeff Madrick and Bill Bradley. If you missed his Chicago lecture on the imminent decline of America, then at least on YouTube you can still catch him warning before the 2008 presidential election that “Islamic jihadists” and “Europeans” were hoping that John McCain would lose. Recently, it was announced that Henry Kissinger has made him his official biographer, perhaps in the hope that Ferguson, who thinks that the Kaiser should have been allowed to crush Europe, will be equally kind to Kissinger’s reputation. Time magazine in 2004 named Ferguson one of the 100 most influential people in the world, which might help to explain the condition of the world.

Lind doesn’t mention that Ferguson also has a total of three sinecures at Harvard and the London School of Economics, nor that he has achieved a feat I would have thought impossible: making other celebrity professors look good. 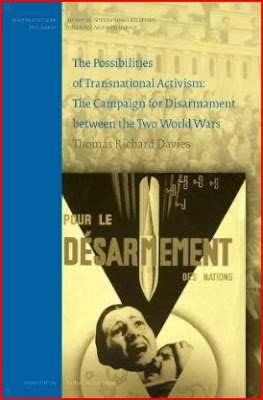 Among the books I’m digesting this month as I work on my manuscript is this gem from Thomas Richard Davies – a case study of the transnational disarmament movement in the interwar period. I especially like two things about this book. First, it deals with a case of campaign failure, as the movement clearly did not meet its goals of general disarmament. This sets Davies’ book apart from most of the transnational advocacy literature that focuses on successful campaign. But secondly, he uses his case very self-consciously as a lever to explore the merit of extant hypotheses about campaign success and failure.

Davies begins by culling a set of hypotheses from the earlier case literature on TANs, detailing factors said to facilitate and impede campaign success, and dividing these analytically between characteristics of the international environment, the national environment, the activists and the issues (not so different from the typology I’m developing in my book, except that he doesn’t examine the impact of network structure on campaigns). He then asks whether any of these both help to explain the outcome in the disarmament case and are not refuted by the wider case literature.

Simply making the effort to test these hypotheses is a contribution – as he rightly points out, the correlates of campaigns success are often asserted but rarely demonstrated by comparison to unsuccessful campaigns. He concludes that of all the variables suggested by scholars, only one that is both constant across the case literature and sensible in the context of his case study: the promotion of a consistent/coherent framework for action:

Essentially, the interwar disarmament campaigners faced a dielmma to which all activists have to respond if achievement of their goals requires a change in public attitudes to an issue: without international public support activists cannot persuade governments to adopt their goals; but if these goals require a change in public attitudes the support will not be forthcoming.

When faced with this problem, activists have a choice between two options: i) conducting a programme of education until public support for their goals reaches critical mass; or ii) fudging their propaganda in order to give the impression of mass public support for their objectives which in fact does not exist. The interwar disarmament campaigners made the fundamental mistake of choosing the second option.

Exactly how this panned out in the disarmament case I’ll let you read the book to find out, but I find the narrative quite compelling and can see analogues in contemporary efforts like the small arms campaign, in which advocates have disagreed over the nature of the problem and the nature of the solution and are thus particularly vulnerable to being undermined by counter-campaigns, as Cliff’s new book will show.

I do have to say I think Davies may overstate his case a bit: while it is extremely useful to apply extant theory to a specific case as rigorously as he’s done, I don’t think you can confirm or refute a general argument on the basis of one data point. It’s true that he also draws on a wider array of cases, but he doesn’t study or code them systematically in the way that he studied his single case. I also wonder whether interwar campaigns are really comparable with the type of transnational organizing that has gone on since 1990, with the benefit of the Internet and a significantly altered normative environment.

But the book is an excellent read on a case that’s been neglected by TAN scholars, many of whom have focused on post-Cold War campaigns. And the practical implications of Davies’ findings bear overstating, as they imply the single most important indicators of campaign success is completely within the norm entrepreneurs’ control.
This is in stark contrast to the perceptions of practitioners with whom I have spoken for my book project, many of whom tend to see themselves as highly constrained by their political opportunity structure. Davies book by contrast provides a simple and powerful recipe for “getting it right,” and shows that whether or not campaigners do this can make all the difference.