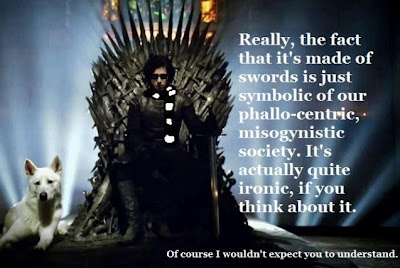 I was recently asked whether Game of Thrones was going to become “the cult IR series of 2011.” My initial response, spouted on a FB update was, “it remains to be seen,” not least since by next Spring GoT will of course be competing with Blood and Chrome.)

As of today, however, “seen” it has clearly been, with multiple IR bloggers posting on various “IRGoT” themes. So I guess that answers that. We can look forward to a veritable bevy of GoT-blogging among IR types for the foreseeable future.

OK, let’s see, Steve suspects the show can best be viewed through the lens of cognitive psychology, and Dan thinks it demonstrates the timeless wisdom of realism. Pablo K, however, in a remarkable, wide-ranging piece at The Disorder of Things takes a more critical view, interrogating gender and racial imagery in Season One with all the tenderness of Gregor Clegane:

The most common female figure is that of the whore; the most common male one a loyal killer. Physically weak, generically meek, hopelessly devoted to their menfolk, the women of Westeros cower and sob at violence and prove useless at the calculations of politics. Catelyn Stark provokes outright war by bowing to her maternal urges and kidnapping Tyrion Lannister on slim evidence that he tried to kill her son, a decision unlikely to have been endorsed had she consulted with her husband, notorious as he is for bad decisions. Cersei Lannister, as Queen of the realm, fares better, managing to manoeuvre her son onto the throne, at which point he becomes a power-mad sociopath, forcing Tywin Lannister to send his own imp son to the capital to pick up the pieces and rule from behind the scenes. Which leaves Arya Stark, everyone’s favourite tomboy, protected from the solid binaries of Man and Woman by the relatively ungendered space of girlness. Thin and still flat-chested, she is able to pass, Shakespeare-like, as a boy. For now.

Married off to Drogo as the bargaining chip for his army, Daenerys Targaryen becomes the sock-poppet for a Game Of Thrones version of feminism… In a parody of anti-rape politics, it requires the authority of this high-born Queen to prevent the conquering Dothraki army from sexually violating the wives, mothers and daughters of the conquered… Wilful in spite of her relative fragility, Daenerys derives her determination from the male heir inside her… empowered by protective feminine impulses over her precious boy cargo, she transcends the pliant object we first encounter to become a commander of men, but only so long as she can claim to speak for their true Lord (wait until I tell Drogo about this!)

Burn! [Sorry…] Seriously, read the whole thing. The discussion of the heavily racialized Dothraki is pretty spot-on – “like Klingons without technology. Oh, and they’re quite swarthy.” The comments thread is also to be studied closely.

I do however see a few things differently from Pablo in terms of gender. I may develop a longer and more coherent essay on feminisms in GoT in due course (this one was drafted at 2am), but here are four initial thoughts:
1) Any discussion of gender in GoT needs to closely examine men as well as women. (To give only the most obvious example, the institution of bastardism is as fundamental to social relations in the show as are male/female hierarchies.) And let’s not exaggerate: the most common male character is not a “loyal killer,” it is (probably) a conflicted witness to killing. Of course there are loyal killers aplenty, but even more disloyal killers plus all manner of men and boys trying to avoid the profession: spies, cravens, eunuchs, squires, metal-smiths, clerks, and capitalists. And the male characters with whom we are most allowed to identify are those who embody an ambivalence toward violence and aim to wield it, if at all, justly. (That Martin means it this way is evident from the way he organizes his book chapters.) There is more complexity here than meets the eye.
2) The most common female character is certainly not the whore (Ros, Shae). It is the political figure – queens (Cersei, Daenerys), ladies of the realm (Catelyn, Lysa), or princesses (Sansa, Arya). But more importantly, it is simplistic to suggest that the female characters all follow any single gender archetype – different “ladies” do different things with their status and power, and even the “whores” are multi-dimensional. I see tremendous and fascinating variation in the way women are portrayed and their connections to gender and politics generally in their societies.
3) Pedagogically, one can usefully distinguish strong women from feminist characters in the show, and also different models of feminism with which Martin toys: i.e., there is not “a Game of Thrones version of feminism” but rather different representations of different feminisms that have analogues in global politics. First, there are many strong, smart women here – I certainly count Cersei and Catelyn among them, if not Sansa and Lysa – but this doesn’t necessarily make them feminist characters (in my view) since their frame of reference has nothing to do with overturning gender hierarchies. Arya, however, does embody a liberal feminist discourse: she insists on the right to take on ‘male’ roles but resists denying her own sex in order to do so. “Passing as a boy” is not her modus operandi but rather a strategy imposed on her, an eventual, temporary nod to traditional norms in a desperate bid for survival.
4) Consider Daenerys by comparison. I continue to disagree that Dany’s character simply reflects and reifies patriarchal norms. She does not, first of all, derive her determination from her male fetus, but rather from the friendship and mentorship of women who surround her (especially her handmaiden and later, at least for a time, a female priestess/healer), as well as the respect of powerful men (she has no time for those who disrespect her – her brother, Drogo’s men, duplicitous merchants).
True, it’s vital to interrogate what peculiar kind of gender ideology she represents. I would argue that Dany, in contrast both with Arya’s rejection of conventional gender norms and Cersei/Catelyn’s indifference to them, represents, for want of a more appropriate term, “state feminism” – her strategy is to accept and embody patriarchal gender archetypes long enough to achieve insider credibility. She then uses the formal power this gives her to engage tribal governors in the service of feminist ends, seeking common cause with other women across clan boundaries and attempting to alter the violent gender norms of her new society marginally in their favor, without questioning its foundations. But her embedded position within a violent, gendered governance structure means she can take this agenda only so far. Ultimately, Dany fails to question, empathize and comprehend the perspective of women with a different standpoint, so her best intentions turn on her and on the objects of her pity. Hers turns out to be the neo-colonial feminism of the white northerner bent on rescuing the oppressed (and in so doing obfuscating her society’s brutality to its ‘own women) rather than seeking to understand them. Failing in this effort this she turns oppressor to reconsolidate her own power base against the “other.”
Is this a patriarchy-affirming narrative? Certainly it is a narrative of patriarchy, illustrating its capacity to divide women against themselves despite their best intentions. But it is also a story of female agency and of identities that cut across and transcend sex and gender. The Maegi’s death represents the post-colonial feminist lesson about the limits of state/colonial feminism. We are meant to be sickened and shamed by it, and to be reminded that neither women nor feminism should be equated with nonviolence. The denouement of this chapter in Dothraki history should not be interpreted itself as being blindly orientalist or patriarchal but as tragically illustrative of the promise and pitfall of different feminist strategies.
Now, Pablo K would (I think) respond as follows:…

fiction is an important stage for tropes of war, diplomacy, sex and race, not least because we’re freed to engage in a more fulsome emotional investment precisely because it’s not real. Excepting professional researchers, activists and inveterate news addicts, the time spent with such representations outstrips that devoted to engaging them in the realm of contemporary politics.

Maybe. However since I’m thinking about this series primarily as a pedagogical tool, I hope I can be forgiven for thinking the series is – or can be understood as – more subversive than it means to appear. Thoughts?

*Though in fairness, the HBO version of Dany and Drogo’s first ride is very different than the book version.