Crimes in and of Famine 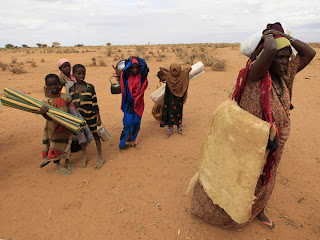 If you find the argument that famine is man-made to be credible, then famine is not just an inevitable outcome of the structural conditions of “failed states” but rather it is purposeful, systematic, and systemic human rights abuse and therefore criminal.

Those who make the argument that the current famine in East Africa is man-made place more blame on political problems of restricted access, entitlements and aid management than the environmental factors of drought, overpopulation, and food scarcity. That Somalia has been hit harder by famine than neighboring Ethiopia and Kenya underscores this point. If famine is, at least predominantly, man-made than by extension there are individuals or groups responsible for causing the famine or exacerbating its effects of death and displacement. As Charles Kenny argues for Foreign Policy, “In order to ensure widespread death by starvation, a governing authority must make a conscious decision: it must actively exercise the power to take food from producers who need it or deny food assistance to victims.”

The debate is not new. For example, in Famine Crimes (1997) Alex de Waal addresses the “political roots of famine” in Africa and the subsequent failings of the “humanitarian international” as an “obstacle rather than aid to conquering famine.” (pxv) More specifically on the question of crimes and responsibility, he argues:

“For war crimes, the challenge is to deter those who cause them. The Geneva Conventions contain strong provisions prohibiting the use of starvation as a method of warfare. Criminalizing the infliction of famine requires a further step, namely enforcing the prohibitions by prosecuting those guilty of the crimes. This it to put famine into the category of offences requiring justice, and in particular war crimes.” (p6)

Certainly civilians living amidst violence and in poorly functioning states are likely to become food insecure and displaced. But is the present famine, the worst in sixty years, an international crime in and of itself? Both Sarah Pierce and Jens David Ohlin explain the factual case that, technically, the famine is neither a war crime nor a crime against humanity but make the normative argument that it should be. Specifically starvation is a war crime but only in international armed conflicts. And for the famine to constitute a crime against humanity there must be intent and knowledge of a plan to cause “great suffering, or serious injury to body or to mental and physical health” as part of a systemic and systematic attack on civilians. This is where the evidence is mixed and raises questions about determining intent and assigning responsibility to organizations and individuals. Those who breed corruption and war often to blame.

In Somalia, civilians are prevented from fleeing to areas, inside or outside its borders, to access food aid, medical assistance, and protection and aid agencies are deliberately obstructed from providing such assistance inside much of Somalia. Human Rights Watch just released a report, “You Don’t Know Who to Blame:” War Crimes in Somalia, accusing all warring factions in Somalia, particularly al-Shabaab but also government forces, of committing human rights violations and preventing access to aid. But most argue that the Islamic insurgency group, al-Shabaab, is primarily to blame. The report’s author told BBC that

“al-Shabaab carries out unrelenting daily repression and brutality in areas under its control, taxing the population for access to water, forcefully recruiting men so they cannot grow crops and restricting access to aid agencies…al-Shabaab must carry he burden of that responsibility for the way in which the fighting has led to human rights violations which have contributed to famine.”

Andrew Jillions, blogging at Justice in Conflict, also directly takes on the question of al-Shabaab’s responsibility or complicity in engineering the famine. And in Kenya too there is finger-pointing at political actors. One Kenyan activist claims “this is a governance drought. It is a situation caused by the government’s failure to plan…” and that big profits can be made from famine.

Whether those perpetrating violence and corruption have intentionally caused vs. exacerbated the famine in the commission of other abuses may matter more for identifying this as a crime and assigning responsibility, but on the ground the end result of either scenario is still increasing death and displacement with little allocation of responsibility.