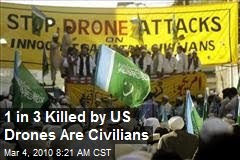 The Monkey Cage has published a detailed guest post by Christine Fair on the drone casualty debate. Fair takes leading drone-casualty-counters (Bergen and Tiedeman’s New America Foundation database and new numbers out from the Bureau of Investigative Journalism) to task for their methodology, in particular focusing on their sourcing:

While these methodologies at first blush appear robust, they don’t account for a simple fact that non-Pakistani reports are all drawing from the same sources: Pakistani media accunts. How can they not when journalists, especially foreign journalists, cannot enter Pakistan’s tribal areas? Unfortunately, Pakistani media reports are not likely to be accurate in any measure and subject to manipulation and outright planting of accounts by the ISI (Pakistan’s intelligence agency) and the Pakistani Taliban and affiliated militant outfits.

Pakistani journalists have readily conceded to this author that perhaps as many as one in three journalists are on the payroll of the ISI. In fact, the ISI has a Media Management Wing which manages domestic media and monitors foreign media coverage of Pakistan. Even a prominent establishment journalist,Ejaz Haider, has questioned “What right does this wing have to invite journalists for ‘tea’ or ask anyone to file a story or file a retraction? The inquiry commission [to investigate the death of slain journalist Shehzad Saleem] should also look into the mandate of this wing and put it out to pasture.”

Pakistani journalists have explained to this author that, with respect to drone strikes, either the Pakistani Taliban call in the “victim count” or the ISI plants the stories with compliant media in print and television—or some combination of both. In turn, the western media outlets pick up these varied accounts. Of course the victim counts vary to give the illusion of authenticity, but they generally include exaggerated counts of innocents, including women and children. Of course as recent suicide bombings by females suggest, women should not be assumed innocent by virtue of their gender.

Thus, these reports mobilized by NAF and BIJ, despite the claims of both teams of investigators, cannot be independently verified. At best, their efforts reflect circular reporting of Pakistani counts of dubious veracity.

I think this is a really important analysis and share Fair’s concerns about the reliability and validity of these methods. I haven’t looked closely at BIJ’s dataset, but I’ve written previously about not only the sourcing problem, but also coding anomalies and conceptual problems with the NAF methods. The Jamestown Foundation, which has another drone-casualty dataset that Fair doesn’t address, has its own problems.

All that said, having made a clear case that we can’t really verify the numbers, I think it’s very strange that Fair arrives at the conclusion, by the end of her article, that drones must therefore be a pro-civilian technology:

U.S. officials interviewed as well as Pakistani military and civilian officials have confirmed to this author that drones kill very few “innocent civilians.” Indeed, it was these interviews that led me to revise my opinion about the drone program: I had been a drone opponent until 2008. I now believe that they are best option.

It’s hard to argue with her claims that drones might be more discriminate than ‘regular airstrikes,’ an argument that largely resets on her observation that the drone program is more highly regulated and this would be obvious to the public if the CIA didn’t have a variety of incentives to keep mum about the details. But in the absence of good data comparing the kill ratios – which we really don’t have for non-drone-strikes either – it’s hard to make this case definitively. Also, relative to what? A law-enforcement approach that involved capturing and trying terrorists rather than obliterating them might or might not be more ‘pro-civilian’ – though it would certainly be more costly in terms of military life and assets. We simply don’t know.

Regarding how we might know, I also don’t buy Fair’s argument that attempts to verify the civilian status of victims through interviews would be fallacious. This view is based on the assumption that the important question is whether a victim was actually a terrorist. But since extrajudicial executions of suspected criminals without due process is a violation of human rights law, that’s not the right question to ask. From a war law perspective, the right question is whether the individual was directly engaged in hostilities at the time of the attack.

Now, Stephanie may well jump in with some more nuance on percolating developments in war law, the notion that direct participation is being expanded in some ways to include off-duty terror leaders, etc; I agree this is a complex grey area in the law but it’s beyond the scope of this post. My point here is that the messiness of this debate is directly related to the conceptual muddiness introduced by the shift toward thinking about the combatant/civilian divide in terms suspects/non-suspects rather than participation/non-participation. Fair’s analysis is only another example of that.

I am not anti-drone. As I wrote earlier this year, I think there’s a fair amount of unwarranted hype about them, and that the real problems are how they’re used, not the nature of the weapons itself. But this tendency to use the drone discussion to legitimize a reconceptualizing of the very definition of ‘legitimate target’ is extremely problematic. And while I support Fair’s argument that some independent mechanism should be established for determining casualty counts and disaggregating the civilian from the combatant dead, I do not share her belief that this is impossible or that it hinges on the distinction between ‘innocent’ and ‘guilty’ – concepts that require due process to determine. If such fact-finding were done – and they should be, as the Oxford Research Group argues – I would support a coding method that reflects actual humanitarian law, not current US policy.

Here is another perspective for those following the issue. The Wall Street Journal also has a piece out today on the topic.