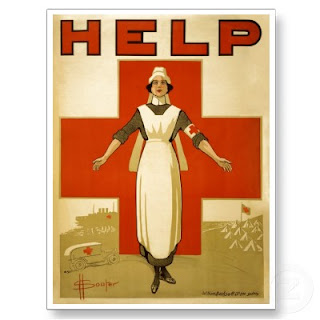 Yesterday the ICRC released a report on the very scary and depressing trend of attacks on medical workers in situations of armed conflict and civil disturbances:

According to Dr Robin Coupland, who led the research carried out in 16 countries across the globe, millions could be spared if the delivery of health care were more widely respected. “The most shocking finding is that people die in large numbers not because they are direct victims of a roadside bomb or a shooting,” he said. “They die because the ambulance does not get there in time, because health-care personnel are prevented from doing their work, because hospitals are themselves targets of attacks or simply because the environment is too dangerous for effective health care to be delivered.”

This makes for some pretty grim and reading.

Yet the evidence is clear – whether it is the targeting of medical workers in Libya, the targeting of a hospital in Afghanistan by the Taliban, or the unwarranted persecution of doctors in Bahrain. (A problem that Dan Nexon highlighted earlier this year here at the Duck.)  Even the allegation that the CIA found Osama bin Laden using a vaccination program puts medical workers and vaccination teams at risk – a potential disaster for global health.

(Aisde: Most, if not all of these issues, are being followed by Christopher Albon at his excellent blog, Conflict Health. Go read it. Read it now!)

The neutrality of medical staff in all circumstances is a core tenant of the laws of war, and some of its oldest codified principles. There is, quite simply, no excuse for harming someone who is engages in these tasks. This was the genius of the 1864 Geneva Convention:

Article 1. Ambulances and military hospitals shall be recognized as neutral, and as such, protected and respected by the belligerents as long as they accommodate wounded and sick.
Neutrality shall end if the said ambulances or hospitals should be held by a military force.
Art. 2. Hospital and ambulance personnel, including the quarter-master’s staff, the medical, administrative and transport services, and the chaplains, shall have the benefit of the same neutrality when on duty, and while there remain any wounded to be brought in or assisted.

These principles continues today as is clear in the First Geneva Convention of 1949. At the risk of being long-winded:

Art 15. At all times, and particularly after an engagement, Parties to the conflict shall, without delay, take all possible measures to search for and collect the wounded and sick, to protect them against pillage and ill-treatment, to ensure their adequate care, and to search for the dead and prevent their being despoiled.
Art. 19. Fixed establishments and mobile medical units of the Medical Service may in no circumstances be attacked, but shall at all times be respected and protected by the Parties to the conflict. Should they fall into the hands of the adverse Party, their personnel shall be free to pursue their duties, as long as the capturing Power has not itself ensured the necessary care of the wounded and sick found in such establishments and units.
The responsible authorities shall ensure that the said medical establishments and units are, as far as possible, situated in such a manner that attacks against military objectives cannot imperil their safety.
Art. 20. Hospital ships entitled to the protection of the Geneva Convention for the Amelioration of the Condition of Wounded, Sick and Shipwrecked Members of Armed Forces at Sea of 12 August 1949, shall not be attacked from the land.
Art. 21. The protection to which fixed establishments and mobile medical units of the Medical Service are entitled shall not cease unless they are used to commit, outside their humanitarian duties, acts harmful to the enemy. Protection may, however, cease only after a due warning has been given, naming, in all appropriate cases, a reasonable time limit, and after such warning has remained unheeded.

The idea behind this is that someone who is seriously injured is hors de combat – in other words, out of the fight, and can no pose a military threat. Allowing someone’s wounds to fester or get worse serves no military purpose once they are hors de combat; it only causes what is normally termed unnecessary suffering. (This is the same principle that bans poisoned weapons – there is no need to uselessly aggravate an injury on someone who is seriously wounded.) The individuals who treat these injured combatants (and civilians) of all sides must therefore be protected from attack. This is why they are allowed to wear the Red Cross/Red Crescent/Red Crystal symbols – it identifies them as neutral medical workers and helps to expedite the process of recovery and treatment. (Abusing these symbols, such as using them as a ruse to conduct an armed attack, is a grave breach of the Geneva Conventions.)

Certainly, there is more law I could cite here. But the main point is that the ICRC is absolutely correct to highlight this as a growing problem.