The World Is Waiting: U.S. Public Opinion and Climate Change

2011-09-27 / Josh Busby / 1 Comment
So, we’re almost in October, and it’s still 100 hundred degrees here in Texas.  We have just endured the hottest summer on record for any state in the United States.  Just last month, thousands of acres burned in a series of wildfires just outside Austin.

Our governor Rick Perry is running for the Republican nomination for president, and though climate change is not high on the agenda, he took time out of his busy schedule to deny that climate change was real and to claim his perspective was akin to being a modern day Galileo. These remarks prompted President Obama this week to quip: “You’ve got a governor whose state is on fire denying climate change.”

Now, as I’ll say more in my next post, there are reasons from a scientific perspective to be skeptical that the drought and fires in Texas are attributable to climate change, but I think it may be smart politics.

Some months ago I posted about Republican elites’ allergies to all things climate change and how this issue had become a partisan signifier like abortion. This was before Perry threw his hat into the ring and before his rival Jon Huntsman took him to task for his climate change denialism via Twitter:”To be clear. I believe in evolution and trust scientists on global warming. Call me crazy.”

At the time, I promised to come back to U.S. public opinion on the topic. So here goes. This isn’t just about U.S. domestic politics because unlocking U.S. climate policy remains the most important step towards addressing the problem globally.

What Do Americans Think About Climate Change?
There has been considerable flux in what Americans think about climate change in recent years in terms of how worried they are about the problem and whether or not they think it is real. While we know what the numbers are doing, I don’t think we have a really good handle on what is driving these changes. That said, we can make some pretty reasonable suppositions.

Between 2008 and 2011, Gallup came out with several polls suggesting that Americans were less worried about climate change and more likely to say the problem was exaggerated (2008, 2010, 2011). Gallup attributed this to the financial crisis based on previous dips in support for environmental protection during economic downturns. 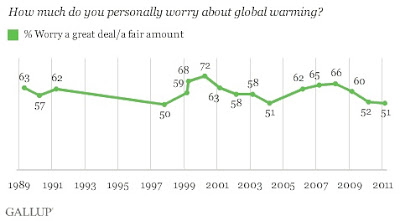 Gallup also suggested the declining poll numbers might be the result of a series of so-called scandals that climate denialists have glommed on to try to make their case that climate change is a fraud perpetrated by scientists eager to get research grants (as if the self-serving motives of people who make their money from carbon-based fuels are somehow less powerful an incentive to deny the science).

So, if you followed this stuff attentively like I do, you read about trumped up controversies over the hockey stick graph (did temperatures increase in the 20th century after centuries of relative stability?). There was also flak over leaked emails by climate scientists from my alma mater the University of East Anglia, and the Intergovernmental Panel on Climate Change got some grief for typos and sourcing errors in a several thousand page document. Small beer, as they say, but perhaps enough to move the dial for some people.

Other polls suggest that the most important differences really are between Democrats and Republicans, with as much a 30 to 40 percentage point gap between Democrats and Republicans on whether they worry about climate change and whether it is happening. A 2011 Yale-based poll also found that self-identified Tea Party types are the least likely to believe climate change is real, while they consider themselves knowledgeable about the problem. They are less trusting of mainstream news sources, scientists, and the EPA.  Tea Party supporters were much more likely (45%) than other groups, including Republicans (20%), to be aware of the controversial UEA hacked emails, most likely from their trusted news sources like Rush Limbaugh, Fox News, and various other conservative websites.

The Economist recently ran a story on this poll with the graphic below:

McRight and Dunlap (2011) draw some similar conclusions from their assessment of a number of polls: they conclude conservative white men are less likely to believe that climate change is real, which they attributed to a particularly risk acceptant attitude among that group.

The good news from the Yale poll and other polls is that a majority of Republicans think the problem is real. Indeed, a 2011 Reuters poll found that the percentage who believe the Earth has been warming increased from 75% to 83% between 2010 and September 2011, including 72% of Republicans and 92% of Democrats.

This could be a result of the way the poll was worded. Other studies by Schuldt, Konrath and Schwarz (2011) and Villar and Krosnick  (2010) have found that Americans, particularly Republicans, are far more likely to believe in the problem when framed as “climate change” rather than “global warming.”

It should be noted that even though a majority of Americans worry about climate change, environmental issues almost always rank low on the list of priorities for Americans, though they tend to identify environmental problems as being among the most important future problems (see these two Gallup polls here and here).

Where does this leave us? I think what this means is that the public is only intermittently attentive to the issue, and while most people are taking their cues from what the scientists are saying, other people are listening to climate denialists and hardening their attitudes to believe that the issue is a hoax.

Just a few years ago, when public concern was at its maximum, moderate Republican governors around the country were jumping on the climate bandwagon to support cap-and-trade initiatives and the like. If we think public opinion matters, then advocates have to do a better job, particularly among the Republican public in convincing them that the problem is real and worth caring about. The recent Reuters poll that showed an increase in concern suggests a possible reason why Americans are becoming worried again: the weather. My next post will discuss how, the science aside, focusing on the local consequences of weird weather (Hurricane Irene, floods in the Midwest, and drought in the Southwest) might concentrate the minds again.