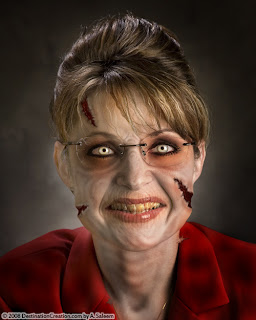 We have gone almost a month without talking about zombies, and you all must be in need of a fix. Instead of thinking how various theories of international relations might expect us to cope with a zombie epidemic, I thought it might be fun to think about how leading public figures – elected officials, pundits, etc. – might respond to a zombie attack. This is in keeping with my general belief that we would see many different responses by individuals in the same structural circumstances, that foreign policy is more important than international relations.

Incidentally, I just want you to know that you can Google anyone with ‘zombie’ in front of their name and find an image. What is wrong with you people?

Michelle Bachmann: This Martian invasion will not be tolerated.

Momar Qaddafi : Can you help a brother out?

John Boehner: My sundried skin will not be tasty to them, I am immune. Later, b*tches.

Nancy Pelosi : Be not afraid, I am one of you.

George W. Bush: Zombies hate America for our freedom, to use our brains.

Rick Perry: I urge everyone to spend the day fasting and praying to God to save us from this zombie scourge. This is exactly why I take my gun with me when I jog.

Al Gore: This is yet another sign of the terrible effects of global warming.

Mitt Romney: Do they take checks? I mean, have they heard the good news about Jesus Christ?

Ron Paul: I might make an exception on military spending for this.

Dick Cheney: You are not going to make a big deal about waterboarding these guys, right? Can we at least agree that zombies do not qualify under the Geneva Conventions or are you going to bust my balls on this one too, Amnesty?

Barack Obama: I reject the false choice between the security that comes with eradicating all zombies and our values.

Glenn Beck: Is Woodrow Wilson one of them, because I’d like a shot at that mother*cker.

Sarah Palin: I am uniquely positioned to deal with the zombie threat. In Alaska I can see the graveyard from my house.

Hillary Clinton: It is important for us to understand underlying structural causes of zombies, like poor access to water and development.

Dominique Strauss-Kahn : OK, I can’t get bitten by one, but can I still have sex with one?

Bill Clinton: I had the same question as DSK.

Bank of America: We know how you feel.

John McCain: It is absolutely unacceptable that zombies are receiving healthcare when they are no longer legal citizens of this country. Or alive.

Hosni Mubarak: This would have been better for me a few months ago. I could have used a little rallying around the flag.

Benjamin Netanyahu: We have some lovely new accommodations we would like to show you just outside Jerusalem.

Let’s make this interactive. Can you think of some others? Please reply below.