Obama ‘how’s that hopey changey stuff working for ya?” 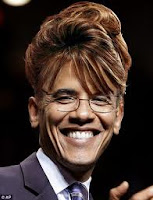 As the Occupy Wall Street New York movement enters its second week of activity and the movement spreads to LA, Boston, Chicago, Denver and other cities across the country, the silence on the part of the Obama administration becomes more and more noticeable (we can’t count Biden’s weird and incoherent references to the movement in an interview yesterday). Few expected Obama to come out with any statement last week, when the media was still painting the movement largely as a band of hippies who don’t know enough to shower, let alone drive a political movement. Dan Gainor at Fox news pointed out that these individuals did not represent the 99%, that they may not even be real Americans, and they certainly didn’t have a movement with traction.

But its October 5th, and there are thousands (there aren’t any specific ideas of numbers yet) of protesters RIGHT NOW who have marched through the city to Zuccotti Park. Backed by one of the cities biggest unions, and joined by thousands of students participating in a national day of protest, one thing is not undeniable: this is a political movement speaking not only about corporate greed, but also about government failure.
Most of us know all this, what we don’t know is what Obama has to say about all of it. And for the first time since I heard her shrill voice spit out these words, I feel Palin’s taunt “how’s that hopey changey stuff workin for ya?’ somehow seems appropriate here (or at least its the first time I can think of the line and not want to hurt Palin). If Obama doesn’t have the political savvy to come out at least with a statement of understanding and support, surely his advisers must be telling him to do so?
Many of the chants resonating through the Occupy Wall Street movement seem to echo lines from Obama’s election campaign.
“Change will not come if we wait for some other person or some other time. We are the ones we’ve been waiting for. We are the change that we seek.”
“Change doesn’t come from Washington. Change comes to Washington.”
Can you really run a campaign on change, hope, speaking to the average American and ending Wall street greed but then remain silent when thousands of Americans (likely many of whom voted for you) start a peaceful political movement asking for a voice and for change? In my mind Obama has already missed the boat in terms of his chance to connect with this movement. The initial silence went from tentative, to awkward, and now is just insulting. These are the issues that American’s want to talk about and the longer Obama remains silent, the more he looses his right to cast himself as the hopey changey presidential candidate in 2012.