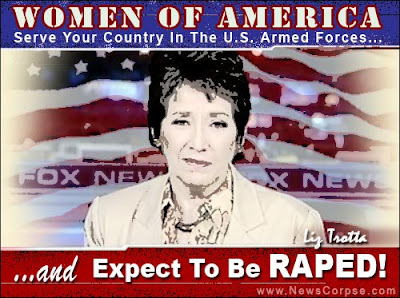 I mostly try to let Fox News polemics slide past me like water off a ducks back. It was easy to dismiss Liz Trotta’s first rant about the proposed changes to the US military, which will allow more women into front-line positions (and recognize those women who are already in these posts) but the second iteration, in which she clarifies her position (and clearly reads a diatribe from a prompter) demands another interruption to my blogging hiatus. We should start with a briefing of Liz-isms, including: “hardline feminist,” “feminist biology,” and “feminist creed.” Let’s see if these become clear after a quick view of her main arguments:
1. The women and combat issue has “never gotten a fair and open hearing” and has instead been established as a “fait accompli” by “hardline feminists.”
2. These same hardline feminists have helped to fabricate “silly and dishonest fairy tales about women’s heroism in war” to support their case for removing the exclusion.
3. Biology is destiny and that men are facing “feminist biology” and having to work with weaker women.
4. Testosterone rules in war and that in closed combat “basic instincts” take over, which put women at risk.
5. Signs of abuse within the military are all too often used to support the “never enough bureaucracy of women victims within the armed forces.”

Let’s just leave her rant about pregnant women and the desecration of the American family aside for now and work with these 5. First, the women and combat issue has received almost as many open hearings as Fox has failed Republican hosts. Liz herself cites the 1991 Senate hearing on the issue and fails to note that the policy changes she is talking about came as a result of a commission initiated by Congress. Second, Trotta cites the Jessica Lynch fabrication as evidence that women’s participation in combat more generally has been essentially ‘made up.’ The Lynch debacle is something to take note of precisely because the fairy tale it created was one of female victimhood and male heroism. Why turn to this example of military propaganda when there is other evidence of women’s participation in combat- for example, women make up 16% of the fatalities in the Iraq and Afghanistan missions and several have won medals for their contributions to combat missions in Iraq. Trotta is right on the third point in the sense that women do measure up differently than men in physical standards tests. But, as reported in a previous blog, the military chose to have sex-specific testing- not because it wanted women to have lower standards, but as part of a recognition of physical difference and the requirements needed to test job capacity rather than meet the male standard. And PS Liz, biology isn’t destiny because according to experts like Maia Goodell, over 5% of women are kicking men’s butts on physical standards tests. The AVERAGE women has less upper body strength and endurance than men, but the military often attracts and creates above average female candidates. The fourth and fifth points that Trotta makes are the most troubling. This ‘basic instinct’ argument is a thrown back to prehistoric analysis of men as incapable of controlling their drive and their genitalia. The argument is insulting to men and ignores subsequent evidence that women and men can work in close proximity without men feeling obliged to rape. As for the sexual violence statistics- surely this is evidence of a major gender problem within the military rather than proof that women need to be kept out.
How did we get here Liz (I feel like we’re on a first name basis since you call feminists whatever you want)? What is your objective? Who are these crazy hardline feminists you speak of and why are you so cynical and dismissive of a “feminist creed” focused on “the right to choose, rights over one’s body etc” as you put it? Why are you and other Republicans like Santorum making this about family values rather than seeing it as a sign the changing reality of the US military (and others)? Australia, Canada and 12 other countries have NO restrictions on women in combat roles and the family structure has not disappeared, men do not rape every female in their proximity, and feminists have not overrun the countries with their irrational cries for respect, rights, and recognition.