Global Implications of the Contraception Kerfuffle

Our readers are surely aware of the contraception kerfuffle, the outpouring of criticism and controversy engendered by the Obama’s administration’s efforts to ensure that more American women have access to contraception as part of their health plans. With the insurance schemes of religious-affiliated universities and hospitals often not covering contraception services for women, the Obama administration sought to use the new health care law to extend access to contraception. (It took John Stewart to point out that many of these same plans cover Viagra for men but not contraception for women). The ensuing political melee was almost comic, with the president’s detractors, mostly on the right, seeking to make hay about the extent to which this move was an affront to religious liberty.

In the process, by putting forward only men as interlocutors to speak for women, critics of the President’s plan likely further alienated both women and younger voters. Polling and analysis suggest this that may prove to be a winning issue for the president in the fall election (nearly all American women, including Catholics, use birth control). That said, given a divided Congress, U.S. advocates of family planning and reproductive health face deeper obstacles of mobilizing U.S. government resources to support their cause internationally. I thought I’d use this post to explore some of the global health implications of U.S. domestic politics.

Family Planning and Reproductive Health as Political Football
While global health issues have frequently enjoyed bipartisan support, the same cannot be said of family planning and reproductive health which have unfortunately often become casualties of America’s culture wars. A constant battle has been waged between successive Democratic and Republican administrations mostly about abortion but with important consequences for more consensus issues like birth control.

In 1984, Ronald Reagan initiated the Mexico City policy, what critics call the Global Gag Rule. The policy forbids NGOs that receive U.S. government money from performing or promoting abortion services. NGOs that refused to adopt policies satisfactory to the policy are ineligible for funding.  The International Planned Parenthood Federation was one such organization and lost 20% of its funding. While there were exemptions for rape, incest, and life-threatening conditions, the policy was seen by critics as overly restrictive, sometimes at odds with national laws (which in some cases mandated providing information on all options), and ultimately making it more difficult for women to get family planning services and information.

Congressional opponents of abortion have also extended their concerns to the United Nations Population Fund (UNFPA), again out of concern that the organization was supporting abortions and helping China implement its one child policy. From 2002 to 2008, the United States suspended contributions to UNFPA, an organization that has increasingly shifted its mission from population management to women’s empowerment (As an aside: the Center for Global Development issued an important working group report last year that encouraged UNFPA to streamline its mission and activities to focus more centrally on family planning).

In 2011, supporters of reproductive health fought off aggressive efforts to cut $150 million in funding for international programs and efforts to prohibit U.S. support for the United Nations Population Fund as well as proposals to reinstall the Global Gag Rule.

In an election year in which the GOP primary candidates have largely focused on the domestic agenda, global health issues have not surprisingly been largely invisible across 20 GOP primary debates and on the campaign trail.  That said, this year’s Republican presidential candidates have pledged to resinstate the Mexico City/Global Gag policy should they win. Romney, in his January 2012 speech to CPAC (the Conservative Political Action Conference), sought to win over conservatives who questioned his bonafides on abortion:

On day one, I will reinstate the Mexico City policy. I will cut off funding for the United Nations Population Fund, which supports China’s barbaric One Child Policy.\

Michelle Goldberg for one warns that the consequences of such pledges could be quite significant for women around the world:

If Romney is willing to scrap the only federal program to provide birth control to low-income women in the United States, programs to do the same thing abroad certainly aren’t safe. We already know that, like every Republican since Ronald Reagan, he’ll impose the global gag rule, preventing any American money from going to organizations that perform or even counsel about abortions. He will likely follow George W. Bush in withholding money from the United Nations Population Fund, or UNFPA, an agency that promotes reproductive health worldwide, on the demonstrably false grounds that it supports coerced abortion in China.

It would be convenient to suggest that the Republicans are wholly opposed to women’s health issues, but this assertion would forget that the incredible rise in global health spending happened on President George W. Bush’s watch, not President’s Clinton nor President Obama who has merely continued what his predecessor started. Indeed, his 2013 budget looks like it may be something of a step back from the boom years of the Bush administration.

In the midst of recent criticism of Republicans for the stance on contraception here at home, former Senator Rick Santorum and his supporters have received the bulk of the criticism for their socially conservative views. But, it should be remembered that Santorum was one of the leading supporters of Bush’s other surge: funding for global health. 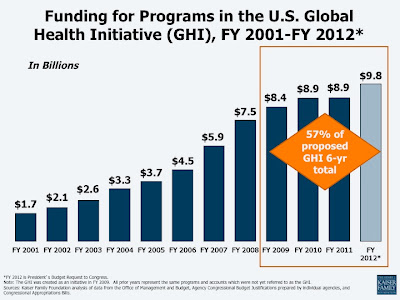 Throughout the early 2000’s, U.S. funding for global health expanded dramatically from less than $2 billion a year to nearly $9 billion by the time George W. Bush left office. While most of the Republican candidates have fallen over themselves to talk about reducing and even zeroing out foreign aid altogether, only Rick Santorum has offered a vigorous defense of PEPFAR and the Global Fund in the November 2011 national security debate. As David Fidler noted, Rick Santorum is the one GOP candidate who has a track record of supporting HIV/AIDS programs that have had a tremendous impact on saving the lives of women and children. 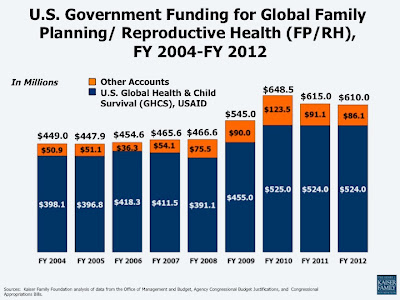 It is true that even as U.S. funding for global health increased in the Bush years, U.S. funds for reproductive health and family planning remained largely flat by comparison (as these tables from the Kaiser Family Foundation reveal). This left disappointed proponents of family planning grousing that disease like AIDS were diverting attention and resources from other problems that in their view accounted for a larger share of deaths in some countries.

This always struck me as a little bit of sour grapes from groups hoping to capitalize on the success of the AIDS treatment advocacy movement. It is not as if those funds were fungible. The President and Congress were moved by the compelling story of millions needlessly dying of AIDS while treatment was possible. Activists from these other causes needed to make a stronger case that their issues were worth supporting.

Indeed, the Global Health Initiative from the Obama Administration did widen the aperture of issues that received attention from the U.S. government, including reproductive health. President Obama just released his proposed 2013 budget which, according to Population Action International, includes modest increases for international family planning and reproductive health after two years of cuts. Most of the money is dedicated to bilateral programs administered by USAID but also includes the U.S. contribution to the UNFPA.

However, these are just proposals and with Republicans controlling the House, it is anybody’s guess as to what level of support these programs will ultimately receive. Obama’s total request of $8.5 billion for the Global Health Initiative is 3.4% lower than than FY 2012 levels.
Given that poor women overseas have no voice in the U.S. political system, it is easy enough to see how their concerns, however trivial a part of the federal budget, will not get much attention in an election year.

Of course, the same was once said of global health writ large. AIDS activists dogged Al Gore on the campaign trail in 2000 and the ONE campaign (which appears to be pretty silent this primary season) vigorously engaged the candidates on international development and global health in 2008. Even as advocates celebrate the planned extension of contraception services here at home and the modest proposed increase in funding, they should seek ways to engage the candidates and the broader political class about the value of providing reproductive health services.

Given our two party system, one party’s ownership of this piece of global health is ultimately bad for women’s access to family planning. Perhaps it is impossible to disassociate contraception from abortion, but this episode may provide an opening for advocates to appeal to women and particularly younger voters across the political spectrum about the benefits for families both at home and abroad of being able to decide when is the right time to have children (As a new father, that is something I completely understand).