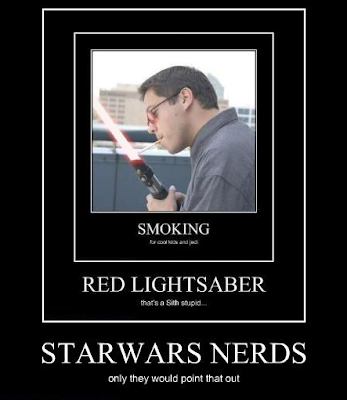 Citizens of Nerd Nation, I invite you to ingest (if you haven’t already) this Geek-Hall-of-Fame-Worthy post.

There are two obvious choices for watching the Star Wars saga.

Release Order – Watch the films in the order they came out, recreating your experience with the films for someone new to them.

Episode Order – Watch the films in the order George Lucas intends, starting with Episode I and going straight through to Episode VI.

There are two critical flaws with both of these orders, unfortunately, that prevent either from being appropriate.

The problem with Episode Order is that it ruins the surprise that Vader is Luke’s father. If you think that this reveal doesn’t matter since it’s common knowledge, I suggest you watch the looks on these kids’ faces. This reveal is one of the most shocking in film history, and if a newcomer to the series has managed to avoid having it spoiled for them, watching the films in Episode Order would be like watching the ending of The Sixth Sense first.

The other problem with Episode Order is that the prequels don’t really have a story. They’re just background for the real story, which is Luke’s attempt to destroy the Empire and save his father. Watching 3 films of backstory is boring if you’ve never seen the films they’re the background to. Hell, that’s why George Lucas made A New Hope first, he knew if he started with Episode I he’d never be able to complete the series. Starting someone off with Episode I is a surefire way to ensure they don’t make it through the entire franchise.

Unfortunately, Release Order is also an instant failure, and the reason is a single shot. If you’re watching the original trilogy first, then after the Empire is destroyed and everyone is celebrating, Luke looks over at his mentors, Ben Kenobi and Yoda, and suddenly they are joined by… some random creepy looking teenager who needs a haircut. Placing Hayden Christensen in the ending of Jedi, since he’s not in ANY of the other films, turns an ending that should be celebratory into one that is confusing for the viewer. The fact that Christensen looks like he’s undressing someone with his eyes doesn’t help.

So neither order really works. What to do?

Go visit Absolutely No Machete Juggling for Hilton’s extensive, brilliantly methodical answer. My favorite line is when he talks about having “cleared his brain out” to re-watch the series. My recommendation to you is to clear out yours a bit before reading his essay, but it’s well worth it.