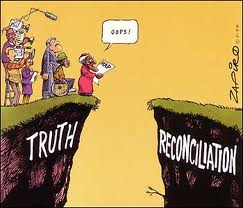 The truth is that we know very little about what truth and reconciliation commissions actually accomplish. What we do know is that they are the poster-child/perfect case of international norm diffusion. In the span of a few decades TRCs have gone from sporadic events used in random cases of civil war or human rights abuse to a consistent, 100% approved international norm. Most research establishes the prominence of the South African TRC (despite mixed reviews on its success) as a turning point from which TRC became the gold standard in peace agreements- particularly in the global south.

Evidence of the TRC norm abound: First, they are endorsed by most major international organizations working in the area of peace and conflict resolution, including Human Rights Watch and Amnesty International. The UN is such a big fan that it established its own ‘took kit’ for establishing TRCs. Second, transitional justice itself has become profesionalized and institutionalized, particularly through the establishment of the International Center for Transitional Justice (ICTJ). In a Foreign Affairs article Jonathan Tepperman summarized the phenomena, stating that ‘the truth business, in short, is booming’ and ‘a new academic discipline has spring up to study the commissions’ pointing to the exponential growth in attention to transitional justice.

Despite all the evidence that TRCs are ‘here to stay’, we still know little about what they do, and if they achieve their lofty objectives. One of the greatest challenges is that the few existing evaluations of TRCs tend to have two major problems:

The practical results of such problems mean that claims of TRC “successes” may be based on biased or limited data. Respondents have been found to complete multiple-choice questionnaires in order to satisfy researchers or to avoid being embarrassed (who wants to fill out the ‘no idea’ column? AND if you know the person giving the evaluation also was part of the implementation process, don’t you think it may skew how you respond?). It is not uncommon to have a majority of respondents admitting that they have little or no knowledge about them but that they also endorse them. In a 2003 poll on the attitude of Sierra Leoneans toward the TRC and the Special Court, conducted by the Campaign for Good Governance, it was found that only 17% of respondents understood the purpose of the TRC yet in the same poll it was affirmed that 60% of respondents declared the Commission as beneficial to Sierra Leoneans.

So why all the claims of TRC success and is it possible to better understand the impacts of TRCs?

Unless the biases in existing research methods are addressed and attention is drawn to the self-fulfilling prophecies of the transitional justice industry millions of dollars will continue to be thrown at these processes at the end of civil wars- a time when neither money nor human capital is in vast supply. There is a need for space in the tightly knit transitional justice landscape for critique and external evaluation- and acknowledgement that such activities will enhance, not detract from the objectives of truth and reconciliation.

Landmine Advocacy From The Digital Archive

I am preparing to leave for a week to conduct participant-observation research at the The Third Meeting of States Parties (3MSP) to the Convention on Cluster Munitions (CCM) in Oslo. As I prepare my remarks for the Youth Meeting, which I understand is supposed to be one of my more inspirational talks, I’ve been looking up old advocacy videos on YouTube and I came across this 2006 landmine campaign ad which I’d never seen before. It was apparently so controversial that it received almost no airtime in the United States.

Although he doesn’t get the European Phased Adapted Approach (EPAA) quite right, Mark Adomanis at Forbes makes the right point about the BMD portion of the Romney foreign-policy memo:

I don’t think I’m being uncharitable, but if you read this paragraph and didn’t have any background knowledge about US missile defense in Eastern Europe you would come away with at least two very clear conclusions

Conclusion 1) is accurate, Obama really did kibosh the Czech/Polish system that had been planned by George W. Bush. Conclusion 2), however, is absolutely, categorically false. Obama , you see, replaced the system planned for Poland and the Czech Republic with a system in Romania. The United States is, right this second, continuing with a play to deploy land-based interceptors in Romania by 2015. Even the Heritage Foundation, hardly an Obama fan club, has recognized this.

This provides an excuse for me to peddle my current theory of the “you betrayed Poland on BMD” argument: former Bush administration officials are just really and truly pissed off that the Obama team undid their hard work on the third-site negotiations with Warsaw.

Recall that Polish public opinion was against the BMD agreement. The negotiations were difficult and took an enormous amount of work. The Bush administration scrambled to complete the agreement before leaving office. The fact that Obama’s people botched the announcement and upset the Polish government just rubbed salt in the wound.

Of course, Romney’s advisors also don’t like the Russians, arms control, and all that. Clearly “abandoning allies” is one of the few lines of attack the Romney campaign considers potentially potent against Obama when it comes to foreign affairs. But I suspect a lot of this comes down to a much more mundane emotion: frustration as seeing difficult work tossed into the proverbial garbage can.

Podcast No. 7 – Interview with Alex Cooley

The seventh episode of the Duck of Minerva Podcast just went live. In it, I interview Alex Cooley about his books on hierarchy, basing, incomplete contracting, and his new book — Great Games, Local Rules: The New Great Power Contest in Central Asia (Oxford University Press, 2012).

Note: the publication date of the podcasts remains in flux, but I am aiming to have them appear Friday-Sunday each week.

A reminder: I am running the podcast feed on a separate blog. You can subscribe to our podcasts either via that blog’s Feedburner feed or its original atom feed (to do so within iTunes, go to “Advanced” and then choose “Subscribe to Podcast” and paste the feed URL). Individual episodes may be downloaded from the Podcasts tab.

Comments or thoughts on either this podcast or the series so far? Leave them here.