Uniting for Peace in Syria: Radical Move or Modest Proposal? 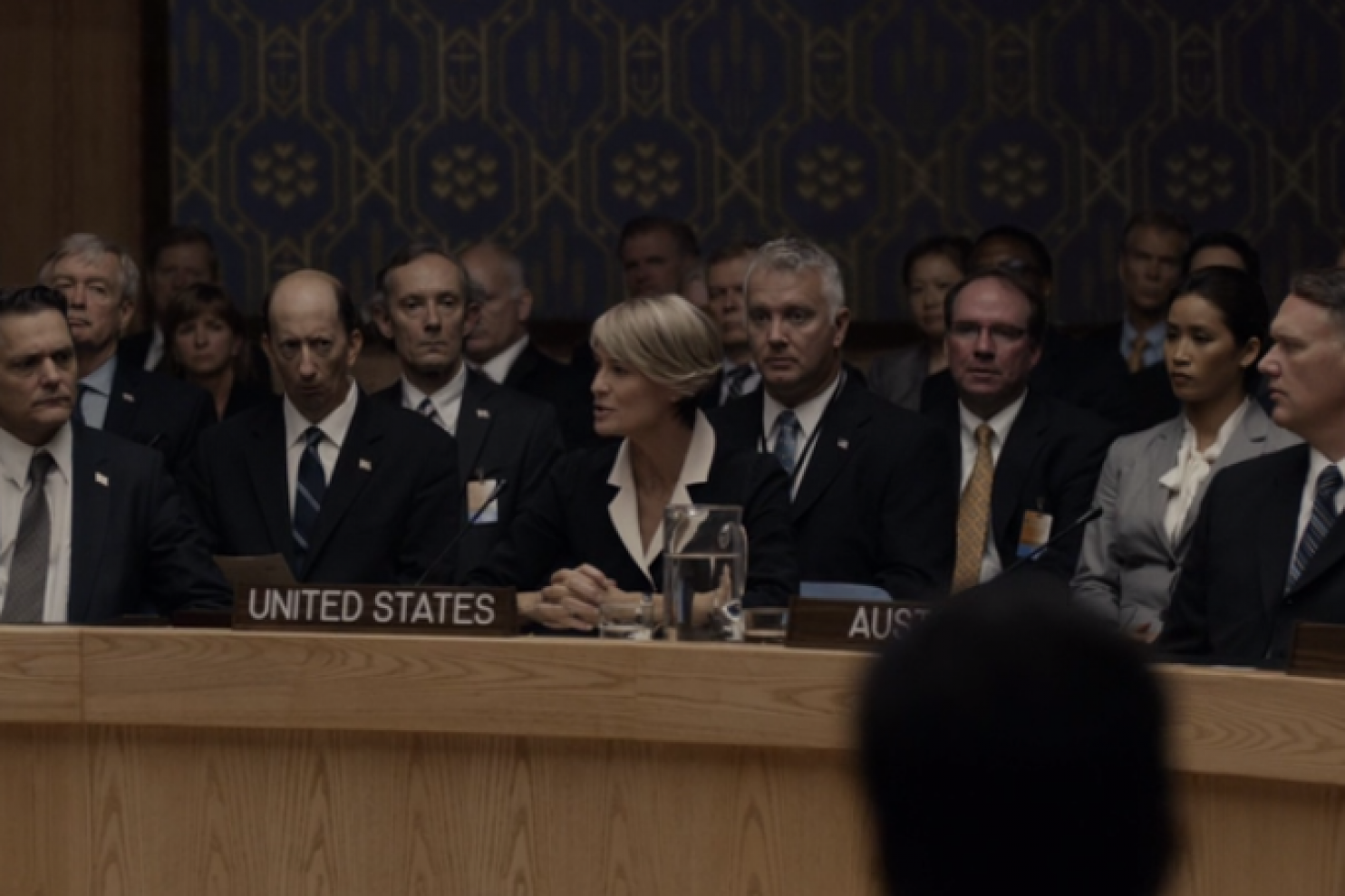 In season 3 of House of Cards, the US Ambassador to the UN introduces a “Uniting for Peace” resolution in the General Assembly to deploy peacekeepers to the Jordan Valley, bypassing a Russian Security Council veto on a similar measure.  The Russian Ambassador’s response? “Going around the Security Council is a radical move.”

Could the UN consider such a “radical” move to overcome Security Council paralysis when it comes to the Syrian conflict?  After all, the Security Council has failed to pass resolutions condemning the use of banned chemical weapons there, let alone authorizing a peacekeeping mission.  Its inability to respond to the numerous atrocities has resurrected doubts about its effectiveness and reignited debates about Council reform.  Furthermore, growing frustration with it may have contributed to the US unilaterally launching missile strikes, potentially undermining norms ensuring global stability and peace.  Nikki Haley, US Ambassador to the UN, told the Council before the strikes, “When the United Nations consistently fails in its duty to act collectively, there are times in the life of states that we are compelled to take our own action.” Yet unilateral action has its own drawbacks. A Uniting for Peace process could provide a third way.

But what are the possibilities for collective action?  A peacekeeping operation like the one established in response to the Suez Crisis in 1956 is unlikely: there is insufficient political will to circumvent a Security Council impasse for an action of that magnitude.  However, there may be sufficient support to use this resolution to create an ad hoc tribunal to prosecute international crimes. The mountain of evidence indicating the commission of grave crimes in Syria continues to grow daily.  Human Rights Watch just released a report concluding that the Syrian government has engaged in the systematic and widespread use of nerve agents, with the intention of some of these attacks “appear[ing] to have been to inflict severe suffering on the civilian population.” According to legal expert Kevin John Heller, “the evidence collected for Syria could be nearly as strong as that used in the Nuremberg trials after World War II.”  The only existing international court that can hear cases involving such crimes is the International Criminal Court.  But because Syria did not join the ICC, the court can only have jurisdiction over it if the Security Council refers the situation to it.  Russian and Chinese vetoes have stymied the Council’s attempts to do so. This is where the General Assembly could conceivably step in.

There are indications such a move would receive wide endorsement.  In a bid to convince the Security Council to refer Syria to the ICC in 2013, the Swiss Federation submitted a letter signed by a diverse group of 60 countries declaring, “Without accountability… there will be no sustainable peace in Syria.”  Fatou Bensouda, the ICC’s chief prosecutor, acknowledged her approval: “I will support [a special Syria tribunal] because for me its [sic] justice, accountability, rule of law, specially justice for… the victims of these crimes, this is absolutely important that it must be addressed.” A coalition of 223 civil society organizations, including high-profile groups like Human Rights Watch, the Global Centre for Responsibility to Protect, and the Syrian American Medical Society, have called on the General Assembly to use the resolution to “explore possible avenues to bring perpetrators of serious crimes under international law on all sides to justice.”  To help support future accountability efforts, the General Assembly in December 2016 authorized the creation of an independent panel to aid in the investigation and prosecution of war crimes and crimes against humanity in Syria.  Individual trials have been or are being held in Europe. Furthermore, the surprisingly broad backing from governments for the US missile strikes suggests the international community’s desire to do something to address the shocking violence occurring in Syria.

Admittedly, this idea is not problem-free.  First, it is unclear whether the General Assembly can lawfully exercise power reserved for the Security Council, such as creating tribunals without the target country’s consent.  Those who claim such a move violates the UN Charter’s separation of powers argue prior UfP resolutions either involved consensual measures or simply offered additional legitimacy to action that didn’t require Council approval to be international law-compliant, like using force in self-defense.  Others counter by suggesting that the Council has primary, not exclusive, responsibility to authorize non-consensual action.  The General Assembly is then permitted to step in when the Council fails to exercise this responsibility. A second concern is that General Assembly resolutions are non-binding.  They cannot compel UN members to create a tribunal in the same way the Council can.  However, they can confer legitimacy upon collective efforts taken in their name.  And states that take coercive action (such as transferring a suspect in their territory to the tribunal) won’t necessarily have to fear violating international law. A third concern is where such a tribunal might be located.  For ease of prosecution, it should be as close to Syria as possible, which significantly limits the options.  One possibility is Kurdistan due to is proximity, relative stability, and ability to provide the tribunal some security.  Financing the tribunal would be another significant hurdle.  Yet, given the extensive support prosecuting Syrian crimes has and the depth of current frustration over the UN’s repeated inaction, perhaps the international community would be willing to put its money where its mouth is.

Make no mistake: creating a special tribunal for Syria isn’t an easy task.  Otherwise, it would exist right now.  And merely creating this court is no substitute for sustained political efforts to end the conflict.  Yet, despite these difficulties and limitations, there are compelling reasons to pursue this endeavor, especially given the absence of other meaningful actions taken by the international community.  First, failure to act weakens international law’s protections for civilians and does so in a way that implies an unequal valuation of life.  Second, as Bensouda’s statement indicates, retributive justice can facilitate reconciliation in post-conflict societies by promoting the rule of law, challenging the culture of impunity that permits substantive legal violations.  Third, if the tribunal indiscriminately holds accountable anyone who disregards civilian protections in Syria, it could reduce the global South’s perception that the international community selectively pursues justice.  If the international community, and the UN specifically, wants its commitment to human security, human rights, and global security to be taken seriously, it must meaningfully translate its words into action.