Three years ago, on this day, the Malaysian Airliner MH17 flight from Amsterdam to Kuala-Lumpur was shot down over Ukraine. 298 people died. In October 2015, the Dutch Safety Board (DSB) concluded that the airliner was downed by a Buk surface-to-air missile launched from pro-Russian separatist-controlled territory in Ukraine. These findings were also confirmed in September 2016 by a Dutch-led Joint Investigation Team (JIT). The Russian government disputes these findings.

Let’s go back 3 years to the Russian mass media  and examine what passed as “truth” about the crash.

One of the first versions unveiled by Russia’s Channel One about the downed Malaysian Boeing was that the Ukrainian military “mixed up” the Malaysian Boeing with President Putin’s plane, which the Boeing plane apparently crossed around Warsaw. Even in terms of geography, this version is so absurd that it’s surprising how persistently it was repeated on Channels One and Two, and then moved to social networks. TV reports about the Boeing disaster blamed Ukrainian authorities almost right away. The alleged presence of a Ukrainian fighter jet in the airspace was supposed to convince Russian viewers that the Ukrainian military was to blame for the catastrophe: Ukrainians shot down Boeing specifically to accuse the separatists [opolchency] of this. It’s not surprising to see the results of  a poll on July 30, 2014 conducted by the Levada analytical centre:“Did you hear about the July 17 crash of a Malaysian aircraft in the sky over Ukraine, and if so, why did you think this plane crashed?”  The overwhelming majority of respondents thought that the Ukrainian military was involved in the disaster: 46% claimed it was a Ukrainian surface to air missile and 36% thought it was a Ukrainian fighter jet. Only 3% blamed it on separatists, while 16% had no idea why the plane crashed. Given the open nature of the question, the results of the study are mind boggling: almost 80% of respondents believed that the Ukrainian side was involved in the disaster. If we follow the content of news reports on Channel One after the crash, we can conclude that most Russians trust the information they saw on TV.

If you analyse data of social networks, the picture is slightly different. For example, according to a poll conducted by a late oppositional blogger Anton Nossik in his LiveJournal, only 27% of his readers expressed support for the version where the Ukrainian military was responsible for the disaster, but this most likely indicates a more oppositional leaning of his audience. In Twitter and VKontakte, the situation is much closer to the official discourse in its conspiratorial interpretation. It was widely speculated why  “black boxes are decoded for so long”, that the “Ukros [Ukrainian] and the US will have to answer for the downed Boeing”. Of course, the wildest conspiracy was the version voiced by Igor Strelkov, one of the then leaders of the self-proclaimed Donetsk People’s Republic. According to Strelkov, the flight was full of dead bodies and the plane was shot down by Ukrainian soldiers to blame Russia and the separatists. This version became so popular that it made it to the pages of the most widely circulated newspaper in Russia Komsomolskaya Pravda. MP Zhirinovsky also reiterated the same version in an interview: the plane was filled with corpses that Americans bought in Dutch morgues and then wanted to blame Russia for the catastrophe. Twitter conspiracists managed to find a “Jewish’ trace in the crash. I mean… who wouldn’t?!

Those who read the reports (including the open source Bellingcat investigation) can clearly see: the rebels used a Russian-supplied Buk in order to continue shooting down Ukrainian fighter jets over separatist territory. The Ukrainian army simply had no use for a Buk: rebels did not and do not have any military aviation. Strelkov’s page was in fact the first to report the downing of the plane that rebels mistook for a Ukrainian fighter jet. Here is a screenshot of a Vkontakte post on July 17th at 17.70 Moscow time: 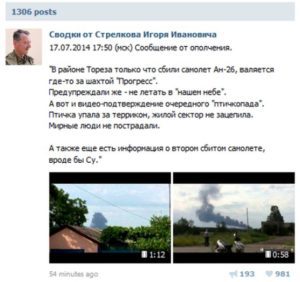 The message says: “Around Torez we shot down an An-26, it’s lying around somewhere at the “Progress” mine. We warned you, not to fly in “our sky”. Here is video evidence of the “birdfall” [sic]. The bird fell behind the spoil pile, villages were not affected. Civilians were not harmed [sic!]. There is also information about another downed plane, seems like a SU”.

I just have one question to these people. How do you sleep at night?