My student Lina Shaikhouni and I have a new Foreign Policy piece in which we make “The Case Against the Case Against Drones,” to paraphrase Stephanie. 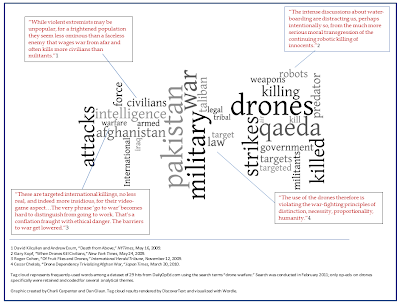 In particular, we point out:

We also argue that the focus on drones per se is a distraction from what are actually more profound and wider issues:

… Those who oppose the way drones are used should shift focus to one of the big normative problems touched by the drone issue: whether truly autonomous weapons should be permitted in combat, how to accurately track the civilian cost of different weapons platforms, and whether targeted killings — by drones or SEAL teams — are lawful means to combat global terrorism… Focusing on the drones themselves misses this bigger picture.

What you see above is a visualization of the data on which our argument is based, created with help from Dan Glaun (click here for clearer picture). We ran a search for “drone warfare” on DailyOpEd.com, which indexes opinion articles and letters to the editor, and identified 29 hits that dealt with drones specifically (as opposed to just mentioning them in the context of arguments about other things). We loaded these documents into a tool called DiscoverText and used it to render a tag cloud of the most frequently used words across the set of op-eds.

We then drilled into the text itself, studied it closely, and used a consensus coding scheme to tag specific instances of the types of misconceptions we identified across all the op-eds. Any statistical or numerical references in the article are based on this coding. While we don’t single out any author in particular as intending to make any of these particular arguments, the aggregation of passages across many op-eds adds up to a pattern in the broader debate. Specific quotations emblematic of the misconceptions we noticed have been high-lighted in the info-graphic above.