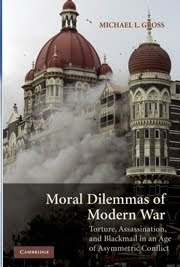 I have an essay online at Current Intelligence on Michael Gross’s recent book. Moral Dilemmas of Modern Warfare explores the ways in which “new wars” are challenging the existing law of armed conflict.

I’ll have more to say about his proposals in a forthcoming Foreign Affairs essay, but in this piece I focus on his characterizations of “asymmetric war” and on his notions of “norm change.” I think the asymmetries to which he refers may be more apparent than real, and the norm “shifts” he describes – like the breakdown of respect for the civilian/combatant divide – are actually patterns of norm violations.

Gross’ typology of “asymmetry” – material, legal and moral – as an explanation for war law violations is highly useful analytically. But as a description of what is new about war it holds up poorly. Material asymmetries between belligerents have always existed – both among states and between states and their many colonial, tribal or insurgent adversaries throughout history.

Neither is legal asymmetry anything new. In fact, war law was designed in part to distinguish ‘lawful’ from ‘unlawful’ combatancy, as nineteenth century European governments sought to privilege professional armies over nationalist insurgencies in territories under their control. And certainly, moral asymmetry has always been a feature of war. Combatants differ in the justice of their causes and of their means: guerillas, terrorists and even (at times) states have always sought to exploit the ambiguity between civilian and combatant.

In many ways, war law has in fact adapted already to these distinctions over time. It already recognizes, for example, a central insight that Gross articulates: that the appropriate distinction between civilian and combatant is not moral innocence but rather whether or not they are directly participating in hostilities. This is because indirect civilian participation in war is nothing new…

Indeed, the real logic of Gross’s analysis rests on a feature of contemporary war he under-theorizes: advances in technology, particularly aerial munitions. Indeed, many of the moral dilemmas he describes are based on the availability of air power to one (but not both) sides in such conflicts, and to the widespread assumption that it must be used as a tool to defeat the enemy. Such technological advances (along with other developments in non-lethal technology) exert two game-changing effects on modern battle-spaces, one practical and one normative. In practical terms, they alter the types of injury that can be done to civilians, particularly increasing the scale of indirect harm due to damaged infrastructure. But secondly, the availability of air-delivered explosives has contributed to casualty aversion in democracies, affecting nations’ willingness to expend military blood to achieve military objectives…

…But Gross’s suggestions that these and other political trends prove international norms are changing may be over-reaching. Much of what he documents – like the emerging practice of treating “associated civilian targets” as military objectives – is a set of deviations from international norms by states seeking to pursue their interests outside the bounds of the law. What this shows is not that “new norms” are taking shape, but that the existing norms need greater clarity and sharper teeth in order to shift the moral calculus of justifiably self-serving actors.

You can read the entire essay here.