Observations on Traffic Safety From Indonesia 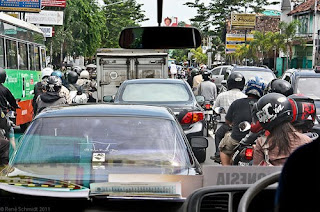 A few days ago this startling report hit the newsstands in Jakarta, proclaiming Bali to have surpassed Phuket in highway “carnage”:

Bali’s roads have become the scene of unprecedented carnage, with 758 people dying in traffic accidents in just three months, 200 more fatalities than all of last year, police said on Friday. An average of more than eight people a day died on the resort island’s roads in March, April and May…May was the deadliest month, with 286 deaths and 360 injuries, followed by March with 248 dead and 302 injured. The death toll in April was 224, with another 281 injured.

I can’t comment on the validity of the numbers but if true then per capita (Bali’s population now stands at about 4 million) that is about seven times the US traffic fatality rate for 2009.

Traveling around the island, I could see why. I found it remarkable that we didn’t witness at least one deadly wreck during our days there. In the country-side, drivers sped along curvy, one-lane roads with abandond, narrowly missing oncoming traffic. In Kuta, the traffic was intense and chaotic, a dizzying writhing snake of taxis, cars packed in nearly bumper to bumper with three times as many mopeds maneuvering neck and neck, lane to lane.

Few scooters carried helmeted riders, even fewer outsie the city. Those that did usually carried at least one un-helmeted toddler as well, napping unsecured on the handlebars ready to slide off any moment; or a five-year-old on the back, gripping the seat with his legs while using his hands to text on a mobile phone. The mopeds move lithely in between the cars; no rules exist about minimum safe distance. Our taxi once swiped a motorcyclist as it passed us; the rider simply shrugged off the impact and carried on. Meanwhile, our driver had a television documentary playing on his screen in the front of the car.

When we had to ride in cars – from Jimbaron Bay to Kuta, to Yeh Gangga Village for a horse trek, or Sanur Beach for kite-surfing lessons – I distracted myself from the expectation of an imminent accident by thinking and asking about the emergent order in this seeming chaos. What were the rules? Why weren’t they being followed? How did motorists manage to get by in the chaos?

Cultural explanations aside, the Indonesian government is actually rather concerned about traffic safety and has made efforts to tighten strictures since 2007: helmets are in fact required, and you’re not supposed to cross the solid line. But new rules are rarely enforced. Indeed when Jakarta (where traffic is far worse than Bali: one expat described a six-hour cab ride three miles from the military academy to the US embassy) – first implemented the new rules on turning right at red lights (Indonesia uses the British system) motorists nearly revolted in opposition to the tickets.

Perhaps this is because the government is aiming to alter the laws, rather than the architecture – which as Lawrence Lessig would tell anyone, is rarely the best way to encourage social change. For example, an acquaintaince I spoke with described one effort centered on reducing traffic by creating carpool lanes. However no effort was made to provide additional public transportation for the people who were presumably not going to be on the roads. Nor did authorities actually build new lanes but rather simply created a rule stating that any car in the left lane with fewer than three people would receive a ticket. So in theory this would have simply increased congestion in the non-carpool lane. In practice, what it did was encourage motorists to increasingly drive on sidewalks, and to create a new industry: individuals who hang out by the carpool lane and jump into cars for a fee in order to enable them to use the lane lawfully.

In Bali, at least, social norms appeared to govern traffic flows more than legal rules – leaving one observer to describe traffic there as “zen chaos”:

Being an active participant in Bali traffic is quite an illuminating experience, by no means limited to complex vehicular dynamics. It is a social and cultural phenomenon as well, not to mention a crash course in logistics, strategic planning, tactical implementation and group psychology…. One can contemplate the fluid chaos around one’s bike while interacting with it. Staying alive is always such a good motivator, too.

I’ve learned some simple rules to help me survive so far. Treat all turns as merges. Think zipper. Treat all intersections as the merging of two traffic streams at right angles. Give way only to those you are about to hit, or are about to hit you. Travel at the speed of the surrounding traffic. Drive in a bubble, concerning yourself only with the people in front and to the sides. The ones behind can take care of themselves. Assume that anyone joining traffic from left or right kerbs will not look before accelerating. Above all, follow the medicos’ creed: “First, do no harm”. It doesn’t reduce the chaos, but it does make it a little more bearable.