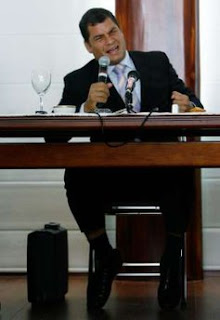 One of my classes is currently doing a unit on “Prospects for US Primacy.” It follows my usual design for such sequences: some balance-of-power theory applied to unipolar orders, followed by hegemonic-order theory, and then a smattering of the “US Empire” debate.

Today we worked through some different conceptions of power and balancing, before winding up on a discussion of soft balancing. Next week we’re going to mostly eschew lecturing–I did too much of that today–and discuss a series of questions and issues related to the themes of the unit, as well as a few “policy and punditry” pieces I had them read at the outset.

One of the issues I want them to talk about involves “new wave socialism” in Latin America and, in particular, what to make of the Venezuela-Nicaragua-Ecuador-Bolivia bloc.

Such matters strike me as particularly apropos given that Venezuelan President Hugo Chavez declares the financial crisis in the US and Europe the “Failure of Capitalism”, Venezuela expands ties with Russia, Bolivia does the same, and Ecuador votes in Venezuela-like reforms to its constitution.

Now, all of this clearly signals diminished US influence in Latin America, but I wonder whether, how, and to what degree any of this truly matters to US interests and global standing.

We’re not facing a new Cold War (at least, not yet) in which these regimes might become, even with a few Russian bombers, consequential outposts for a hostile great power. And while members of the Chavez bloc have certainly made trouble for Colombia, they haven’t been able to do much to prevent the diminishment of the threat posted by the FARC to that staunch US ally.

In some respects, how we judge these developments depends upon (1) whether or not we foresee an inevitable clash between liberal democracies and an alliance of rival political orders or (2) whether or not we are inclined towards a genuinely “offensive realist” viewpoint in which every inch of influence is worth fighting for. But there may be other possible frames I haven’t considered.

Regardless, I’m curious if our readers have any thoughts.

Bolivia remains on the brink of falling apart.

… and the Ukrainian government collapses. Can’t say that I’m surprised.