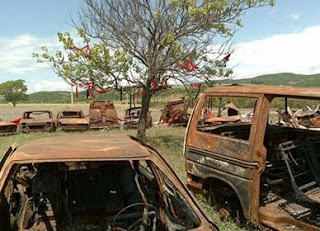 I have a commentary at the Radio Free Europe/Radio Liberty website today on the EU’s Independent International Fact-Finding Mission on the Conflict in Georgia. It expands on my earlier remarks about the gap between the report’s findings and the political spin:

“Those who read the entire report will find it is a masterpiece of legal and evidentiary analysis. The authors have painstakingly synthesized multiple branches of international law with scores of interviews, reams of source material, and numerous reports from NGOs. The report itself is nearly 500 pages ‘applying principles to facts.’ Despite a few inconsistencies, it is generally fair-minded, objective and apolitical. It should have done the job.

But in putting together the detailed legal analysis too little thought appears to have been given to the political impact or how to frame the report so that its key findings are intelligible to a public and press corps not intimately familiar with the details of international law. In failing to deliver the key findings up front with savvy and punch, the EU Mission allowed the report to be hijacked by interested parties for a continuation of the very political argument it should have put to rest.

For example, after reading the whole thing I must qualify my earlier suggestion that the report doesn’t distinguish between the interstate and intrastate dimensions of the conflict. It does at several places. But the title and executive summary do not – which probably explains why journalists and politicians have been able to spin it as they have.

More importantly, the authors’ conclusions about Georgia’s guilt in “starting” the war with S. Ossetia do rely on what I find to be an unconvincing application of the UN Charter regime to an intra-state war, essentially blurring the distinction between the two.

More on this – and the other “few inconsistencies” I wasn’t able to cover in the space limit given me by RFE/RL – are at Current Intelligence, where I’ll be posting periodically on war law issues for the foreseeable future.