Youth Violence in Rio and Elsewhere 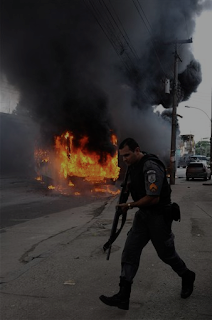 Much was made over the weekend of 14 gang deaths in Rio, host of the 2016 Olympics, forcing Brazil onto the defensive. I wonder if the same attention would have been given to the following news story from last week, had Chicago won the bid:

Community activists said the recent murder of a Fenger High School honor student exposes a problem many teens face every day: safe passage to and from school.

“I wonder how many more teens will be murdered while coming home from school,” said Leonardo D. Gilbert, a Local School Council member in the Roseland community. “All this kid was trying to do was go home and it cost him his life. If we are going to save our children from violence we must make sure children have a safe way home from school.”

According to Chicago police, Derrion Albert, 16, was murdered after school on Sept. 24 while waiting for a bus to go home. Duncan, who previously was the CEO of Chicago Public Schools, said watching the videotape beating of Albert was “terrifying, tragic and horrible for America to watch.”

Since Albert’s death there have been vigils, anti-violence marches and community meetings to discuss ways to keep children safe when traveling to school. “I am going to die anyway so until that day comes I am going to hold my own,” said William Jenkins, 16, a sophomore at Fenger. “Almost everyday I have to fight my way home because I get picked on because I live in the projects rather than the ‘hood.”

One girl explained how in 2008 she and her sister, both Fenger students, were attacked on a Chicago Transit Authority bus coming home. “They (Fenger students) busted out the back windows of the bus, then came onto to the bus and sprayed mace in our faces,” Stephanie Patterson, 17, a senior, recalled. “The bus driver did nothing. School administrators did nothing when our parents told them and the police didn’t do anything but make out a report.”

“We go to school to learn, not to see violence or worse yet murder,” she said. “After you’ve seen so many of your friends get killed it starts to affect your ability to function in school and life. That is where many of us Altgeld kids are today.”