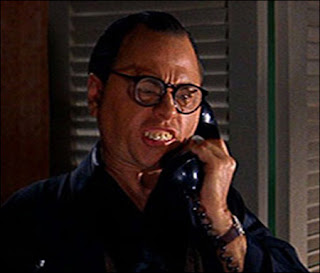 Last night Texas Governor Rick Perry, formerly for some reason regarded as a serious contender for the Republican nomination for President, embarrassed himself by being unable to remember the third department of the federal government he would eliminate upon being elected. This has caused a big media stir about whether his campaign is doomed, with the narrative being whether someone with such a bad short-term memory can be the leader of the most powerful country on earth, for a little while longer at least.

I’ve had brain freezes before, and I can only imagine I would have even more if I were on national TV. That’s not the problem. The problem is that this dipshit thought it was funny, offering a very glib, ‘Oops’ that made it very clear, if it weren’t clear enough already, that he does not take running for President seriously. The reason why Perry forgot the third department, the Department of Energy, is that he almost certainly just came up with this on the fly before the debate. The problem is not his memory, it is that something this serious was only part of his short term memory. It was not internalized as part of a momentous policy change but rather just a flip statement, a simple one-off red meat bait to the base. Of course he forgot it. F@ckwad. I can guarantee you that Rick Perry hasn’t an earthly idea of what the Department of Energy does. If he wants to close it, then make the intellectual case and know what you are talking about. D*ckhead.

Perry has tried to defuse the situation with…. MORE HUMOR. On his website he asks his supporters which federal agency they would most like to forget. It is not funny, you taint.

This is a trend in this party, too. Herman Cain doesn’t know that China already has the bomb. But that isn’t bad enough. They have to celebrate it, as if not knowing makes them more qualified to be president. Hence, the Uz-beki-beki-beki-stan comment. I don’t know much about Uzbekistan either, but I do know how to spell it. And I’m not proud of my relative lack of ignorance about this very important part of the world. And I’m not running for President. As*&hole.

We can get vexed about Cain’s comment because it is insulting to another country, akin to making fun of how Chinese sounds to American ears. But it is bad policy too. No one with even an ounce of realist statesmanship would do something so stupid. Prick.