Mother In Chief? Not Exactly Your Typical Feminism, But… 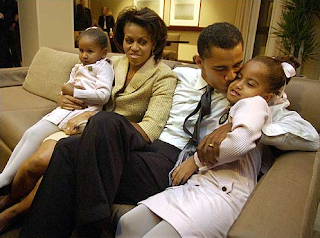 Michelle Obama is doing something very interesting. She is taking back family values from the right.

Michelle Obama brings the skills of a corporate lawyer to the White House as first lady to President-elect Barack Obama, but she says her priority will be her role as ‘mom-in-chief’ to the couple’s two daughters. Michelle Obama, 44, was a passionate advocate for her husband’s candidacy, but she says she would not want a direct policy role in an Obama administration.

To those for whom breaking the gendered glass ceiling would have felt as or more transformative than seeing a US President of color, this “Mother-in-Chief” approach could seem like a regressive subordination of women’s political equality to racial equality. By this standard, Palin, with all her flaws, would have been a better feminist role model – to say nothing of Hillary Clinton, who would have combined a gender-egalitarian agenda with her trail-blazing role as the first female Commander-in-Chief. By comparison, Michelle Obama may seem at first glance to be defining her role no differently than Laura Bush, a help-meet rather than political partner. Perhaps this is a throwback to an earlier age. Perhaps feminism has been traded for racial equality in this election.

Think again. The fact that people have assumed that Michelle would take on a formal political role as first lady only underscores how normative women’s political participation is today. Her unwillingness to prioritize that over her duties to her children is not a step backward but a step forward for the feminist movement: what Michelle is modeling is not indifference to politics, but policy attention to work-life balance, the missing element in the first feminist revolution. As the same news-article relates:

She also says she hopes to focus ways women maintain a work-family balance and the needs of military families, and she could act as an informal adviser to her husband as she has been during the campaign.

This is the future, not the past. In the race to promote women as full citizens, too little attention has been spent by liberals considering how to support those same women in their dual roles as mothers – to say nothing of providing incentives for their male partners and spouses to do their share of child-rearing and eldercare while participating fully in civic and economic life. Many barriers persist. Today, for example, while women overall are approaching pay equity with men, the wage gap in the US between mothers and non-mothers is greater than between women and men—and it’s actually getting bigger.

So says Moms Rising.org, a growing movement of progressives aiming to prioritize children and families in the new America. Besides fair wages and an end to discrimination against mothers in hiring decisions, Moms Rising calls (among other things) for paid sick days and family leave for parents, for family-friendly work environments, for the right to breastfeed in public spaces, affordable healthcare and childcare, and a rating system for afterschool TV shows. In short, the goal is to build a culture that treats child-rearing as a form of service to the nation rather than an expensive hobby.

Perhaps ironically, the discourse of strengthening and prioritizing family has been largely associated with the right, where this very noble goal has been shackled at times to a gender discourse that emphasizes the role of fathers as breadwinner and mothers as homemakers. But creating the conditions for work/family balance for both men and women achieves the same goal without retrenching old gender inequalities. Part of Sarah Palin’s appeal was her seemingly flawless balance between being a power player in public and at home. Combine this imagery with a policy agenda to make it easier for less privileged women – and men – to do the same, and you begin dismantling the kinds of institutional barriers that have kept women out of the highest office.

This is what Michelle Obama will be bringing to US political culture as a First Lady.