The internet has exploded this afternoon with the revelation that Fareed Zakaria (a Harvard Government PhD 1993) apparently plagiarized significant elements of his Time magazine op-ed this week. As many in the media have noted, including Politico, several paragraphs in his piece about gun control are “remarkably similar” to paragraphs originally published by Jill Lepore in The New Yorker on April 22, 2012. Zakaria almost immediately owned up to the deed:

“Media reporters have pointed out that paragraphs in my Time column this week bear close similarities to paragraphs in Jill Lepore’s essay in the April 22nd issue of The New Yorker. They are right,” Zakaria said in a statement to The Atlantic Wire. “I made a terrible mistake. It is a serious lapse and one that is entirely my fault. I apologize unreservedly to her, to my editors at Time, and to my readers.”

As a result, Zakaria has been suspended by Time for one month, pending further review. CNN has also suspended Zakaria from his Sunday television program.

On Twitter, a number of people have speculated that a careless intern, research assistant, or even a ghostwriter might be the guilty party at the root of the plagiarism. For example, journalist Chantal McLaughlin just tweeted:

“The irony: Fareed could never admit that he had an intern write the column….worse than plagiarism perhaps…”

The potential carelessness of a third party does not make Zakaria less responsible for the words published in his name, but it certainly adds an interesting twist to the incident. Indeed, the entire affair has reminded me about an odd exchange during an interview I watched on “The Daily Show” back on July 23. Host Jon Stewart asked Zakaria if he wrote the latest edition of his own book. Check out this video at about the 1 minute mark: 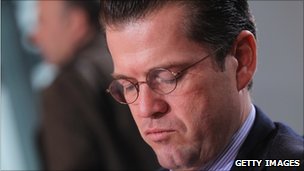 Ooops. The young, charismatic, German Defense Minister Karl-Theodor zu Guttenberg is in trouble for allegedly plagiarizing parts of his dissertation. He announced that he is temporarily dropping his doctoral title. His defense? — there were mistakes, but nothing plagiarized:

“It was compiled over the course of about seven years while I was at the same time working as a member of parliament and while I was a young father. It contains mistakes, no doubt about it. I am extremely unhappy about every single one of those mistakes.”

Among other things, he apparently he lifted passages from a US Embassy website without attribution (even with attribution, that probably should still be a crime).

The media is having a field day. From the same BBC report:

Still the issues are serious and given the increasing frequency of high profile plagiarism allegations, it prompted me to take a look back to Dan’s excellent post and the extensive comments on the topic here at Duck last fall. It’s worth another read if you get a chance.

A fascinating, if somewhat depressing, article in the Chronicle of Higher Education (via Andrew Gellman) discusses recent accusations of plagiarism against Rutgers-Newark political scientist Frank Fischer by (1) an angry graduate student from the University of Zagreb and (2) Alan Sokal of science-wars fame.

The account begins with a political-science graduate student at the University of Zagreb, in Croatia, named Kresimir Petkovic. Last year Mr. Petkovic submitted a paper to the journal Critical Policy Studies. The paper was a critique of the work of Frank Fischer, a professor of politics and global affairs at Rutgers University at Newark, who also happens to be an editor at the journal. Mr. Fischer has edited or written numerous books on public policy, and in 1999 he won an award for his scholarship from the Policy Studies Organization.

Petkovic enlisted the help of Sokal; using the kind of content analysis many of us are familiar with from turnitin, they identified a number of instances in which Fischer more-or-less lifted text from other authors. While he did not place the text in quotation marks, Fischer did cite relevant authors at or around the relevant passages. He also attributed quotations to original sources that, in fact, appear to have been culled from cited (but not associated with the quotations) secondary sources.

Mr. Fischer regularly cites his sources, but he doesn’t make clear that he’s borrowing the structure of the sentences, and often strings of exact wording, from those sources—in a sense, “tracing” the other books. While words have often been changed or added, the similarity of the passages is striking.

Using Mr. Sokal’s research, Mr. Petkovic and the physicist then prepared the 70-page document explaining what they had found, and included the e-mails between Mr. Petkovic and Mr. Fischer. The document also includes Rutgers’s policy on plagiarism, which states that “every direct quotation must be identified by quotation marks, or by appropriate indentation.”

In an e-mail exchange with The Chronicle, Mr. Fischer challenged the idea that what Mr. Sokal and Mr. Petkovic had discovered was plagiarism, calling it only sloppiness. When asked whether the verbatim material should have been in quotation marks, he responded: “Yes, but does one have to change every word? I don’t think what I did is all that uncommon. I think the important part is to cite the works.”

He argued that Mr. Petkovic was lashing out at him because his paper had been rejected.

Mr. Fischer also sent an e-mail to colleagues alerting them that accusations of plagiarism against him had been made, and that there are “passages that should have been more carefully checked” in his books. But he maintained that there were no “no out and out examples of whole passages taken without attribution.”

The article’s comments section contains, strong repudiations of Fischer, defenses of his actions and his career achievements, a response apparently from Fischer himself (#38), and a reply from Tom Bartlett, the author of the Chronicle piece (#52).

I don’t know any of the principals involved (although I’m pretty sure I can identify a number of the commentators), but I do have a vague connection to this incident: I identified and challenged a published piece that engaged in similar kinds of quasi-attribution of my own work–as well of that of a number of other writers. During this process I found a lack a consensus over whether Fischer’s conduct constitutes plagiarism.

As his accusers note, Fischer’s own school defines it as plagiarism. And so do many other institutions. Indeed, under restrictive understandings of plagiarism, borrowed sentences–even if modified to include some word changes–must be both attributed and placed in quotation marks.

But these understandings of plagiarism are not universal. For example, Cambridge University’s definition of plagiarism doesn’t cover many of the passages identified by Sokal:

Examples of plagiarism include copying (using another person’s language and/or ideas as if they are a candidate’s own), by:

• quoting verbatim another person’s work without due acknowledgement of the source;
• paraphrasing another person’s work by changing some of the words, or the order of the words, without due acknowledgement of the source;
• using ideas taken from someone else without reference to the originator;
• cutting and pasting from the Internet to make a pastiche of online sources;
• submitting someone else’s work as part of a candidate’s own without identifying clearly who did the work. For example, buying or commissioning work via professional agencies such as ‘essay banks’ or ‘paper mills’, or not attributing research contributed by others to a joint project.

If I recall correctly, European institutions are more likely to adopt a more relaxed understanding of the parameters of plagiarism than US ones. But such differences of opinion, which exists within North America as well, illustrate how Fischer’s conduct falls in a grey zone. If a Georgetown student turned in an essay that contained similar quasi-attribution, he would find himself hauled before its Honor Council, but that might not be the case at another school.

All of this suggests to me that we need to–as any honor council would–consider the pattern of activity, the specific nature of the borrowings, and the disposition of the accused before rendering judgment.

The article I challenged did not, in my estimation, provide grounds for escalating the issue. I could find no evidence of quasi-attribution in any of the scholar’s other published works–indeed, that academic’s other citation and quotation work was scrupulous. The problems involving my work were clearly the unintentional product of sloppiness during a rushed publication schedule.

So how should we judge Fischer? The widespread pattern involved implies a number of possible causes: general sloppiness, malfeasance, or fidelity to standards inconsistent with those found in Rutger’s current guidelines. And as some commentators note, academics working before the advent of cheap, powerful computers faced greater challenges in working with citations than we do now.

But given the consistent pattern found here, it strikes me that there are only two relevant defenses against these charges:

1. The pattern reflects accumulated mistakes, but that does not excuse them, and a major apology is in order.
2. Quasi-attribution does not,and should not, constitute plagiarism.

Invoking someone’s standing in his field, arguing that none of the putative “victims” ever complained, impugning the integrity of Fischer’s attackers, or any of the other nonsense going on among Fischer’s defenders? Well, that’s just what it is: nonsense. Unfortunately, too many scholars are able to shield themselves via their “standing” with the public or in their discipline–and don’t even get me started on passes for “authorship” at Harvard Law School. If that’s the way academia is going to operate then, at some point, we should just disband our honor councils and call it a day.

If you’re the type that roots for the cats.

And just keep reading through the first dozen or so comments. Takes me back to usenet days of old.