UNSC Resolution 1970: Wait, did the UN just kinda do what it was supposed to? 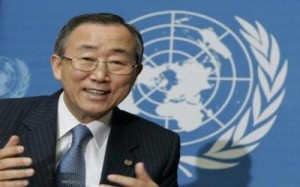 United Nations Security Council Resolution 1970 is a pretty amazing document. Over the last few days I’ve found myself trying to decide if this a rare example of the UN Security Council doing what it was originally designed to do – or an example of an international organization working because there is a relatively powerless state with no allies involved. I suspect it’s probably both.

Still, I’ve been following The Multilateralist blog over at Foreign Policy and I think David Bosco has it just about right:

Last night, the UN Security Council passed unanimously a resolution imposing an asset freeze and travel ban on Libya’s ruling elite, and also referring the situation to the International Criminal Court. None of these measures is unprecedented: the Council has used asset freezes and targeted sanctions with increasing frequency in recent years, and it referred the case of Sudan to the ICC in 2005. But the scope, speed and unanimity of the resolution are remarkable.

I think this last line is a very significant point – even if it’s about a relatively straightforward situation in Libya, 1970 is a comprehensive resolution that was passed quickly and unanimously. Even more remarkably, China, Russia and the United States voted for it (no abstentions) even if it has the power to potentially put Gaddafi on trial at the ICC – an institution they’re not all entirely chummy with.

Clearly this will not solve all of the problems in Libya, but I also don’t believe it is merely an impotent angry-worded letter that critics often speak of. And there are a few things in here that I think are interesting and worth highlighting…

First, the ICC referral. On the surface this isn’t unique, but (as I mentioned above) it is still rather interesting that ALL states on the UNSC agreed to it. The operative clause goes that the UNSC….

4. Decides to refer the situation in the Libyan Arab Jamahiriya since 15 February 2011 to the Prosecutor of the International Criminal Court;

But the reasons why China, Russia, the US, India, (etc) probably found this acceptable can be found in the 6th clause of the resolution:

6. Decides that nationals, current or former officials or personnel from a State outside the Libyan Arab Jamahiriya which is not a party to the Rome Statute of the International Criminal Court shall be subject to the exclusive jurisdiction of that State for all alleged acts or omissions arising out of or related to operations in the Libyan Arab Jamahiriya established or authorized by the Council, unless such exclusive jurisdiction has been expressly waived by the State;

In other words, if a citizen of the US, Russia, China, India (etc) is somehow involved in crimes against humanity, the ICC will not have jurisdiction over them (or any non-ICC national.) It will be interesting to see if this results in anyone getting away with some nasty stuff.

Additionally, Bosco makes an interesting observation on this point:

But it is notable that the resolution references (although in a non-operative paragraph [ed: this means in the preamble, before ‘Action under Chapter VII]) Article 16 of the Rome Statute, which gives the Council the power to suspend ICC investigations if it believes doing so would advance peace and security. It’s not immediately obvious to me why a resolution referring a situation to the court would emphasize this provision. It’s possible that China, the United States and others particularly skeptical of an untethered ICC simply wanted to emphasize the Council’s power to reel in the court. But it could also be a signal that the Council would consider stopping the ICC process in exchange for the peaceful transfer of power.

This is interesting. There has been some criticism of the ICC that its activities in Africa are actually hindering rather than helping resolve conflicts. So would the threat of a prosecution actually give any incentive for Gaddafi to surrender? And would ICC advocates be satisfied if such a deal was made – transfer power peacefully and we’ll leave you alone? I have my doubts.

Then again, if I was Gaddafi, I’d probably rather have my fate decided in sombre environment of The Hague than at the armed and rather angry mob that is headed his way. (If nothing else, surely this would give him another platform for crazy speeches and more elaborate hats?)

Second, there are references to “The Responsibility to Protect” in the preamble of the resolution, and in the comments of the representatives of those who voted on it, but not in the ‘meat’ of the resolution. This is not a big surprise, given how rather toothless the concept has become since 2005’s World Summit Outcome Document (see articles 138 and 139). However, this kind of does seem the ideal time, if ever there was one, to invoke the principle.

Finally, the voting and accompanying statements. According to the press release, when speaking on the Resolution, the Chinese representative said the following:

LI BAODONG ( China) said that China was very much concerned about the situation in Libya. The greatest urgency was to cease the violence, to end the bloodshed and civilian casualties, and to resolve the crisis through peaceful means, such as dialogue. The safety and interest of the foreign nationals in Libya must be assured. Taking into account the special circumstances in Libya, the Chinese delegation had voted in favour of the resolution.

Three points here: First, it’s clear that China agreed to the resolution because of “special circumstances” rather than suggesting it was something they would normally support.

Second, it’s also clear that he is against an armed humanitarian intervention and is not alone on the Council. The Russian representative, while supporting the 1970, spoke out against “counterproductive interventions” that other states might be tempted to engage in.

Third, when Russia and China are voting for sanctions against you AND supporting an ICC investigation in your country, it goes to show you just how freaking isolated you are. I suppose at this point it might be the result of neither country having substantial material interests in Libya and realizing they had nothing to lose (and potentially something to gain in terms of UN ‘street cred’) if they voted for it. (Certainly a sentiment, along with hypocrisy, expressed in this cartoon in the Economist.)

Ultimately, it’s a very interesting resolution and I’ve been using it in my teaching all week. Is it a rare example of the UN doing what it was designed to do in the first place? Even if not, I suspect that scholars will be interested in the reasons for the content of the resolution, the speed at which it was passed, and the effect it eventually has on the crisis – if any.

PS: Oh and I see that the UN has now thrown Libya off of the UN Human Rights Council. Way to act, guys!