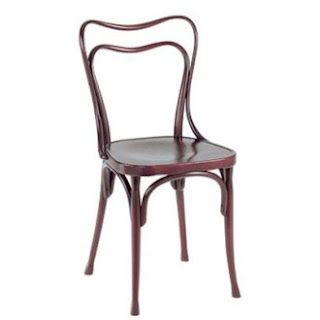 This is a really, really pretty chair. It was designed by Adolf Loos, a turn-of-the-century architect and interior designer. There is a famous building in Vienna once known as the “house with no eyebrows” that is also his. Did you know that? Probably not. Only aficionados of fin-de-siecle modernism really pay much attention. Very few designers are remembered. The same will be true of Steve Jobs in fifty years, maybe twenty. What?! Too soon?

Patrick and PM’s posts are hardly unique today. There has been an incredible outpouring of adulation about Steve Jobs as a visionary. I don’t get it. It is not so much that I oppose his foreign outsourcing. I never really knew much about that until today, but it seems that every major corporation does it, and I wouldn’t single him out for blame even if the practice is kind of despicable. I just don’t get what he really leaves behind except some very pretty things.

I don’t see what Steve Jobs did that others wouldn’t have done, or weren’t already doing, except put them in a prettier box. That puts me in the strange position of denying the importance of agency, which is really my driving interest in international relations. But it seems that all of these things — the ipod, the ipad, the iphone– were inevitable. Jobs just made them more functional. Just like the Loos chair (well technically this was 20 years before functionalism, but you get my drift). Don’t get me wrong, I love my ipod. But I liked my knock-off, too, before it died. I like having my music on my person, but spinning the little ipod wheel does not get me all hot and bothered. Plus, those iconic white headphones suck, no matter how many Feist songs you hear to try and convince you otherwise.

I am ready to be convinced otherwise, but someone please explain this to me. These Apple fetishists were all over the radio gushing about how their products were an extension of them. Isn’t that just plain creepy?

If I were to make a prediction, and you know I don’t like to, Apple will inevitably falter because other people are (always have been) working on similar technologies. No one stays on top forever. And the media will construct a narrative about how this never would have happened under Steve Jobs. But it probably would have. He was Adolf Loos, not Louis Pasteur or Florence Nightingale. Can we put down our ipads long enough to get a hold of ourselves?