Saakashvili: Georgia and Russia at war 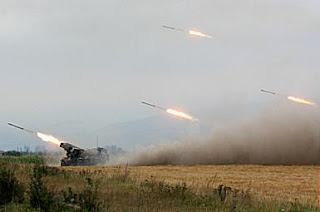 As I noted below, the situation is developing fast.

Saakashvili said in a Bloomberg Television interview that his nation of 4.6 million people is “fighting to secure its borders” amid a “full-blown military aggression” involving thousands of Russian troops. Aerial bombings and wide-spread fighting in and around the region killed an unknown number of civilians and wounded “scores” more, Saakashvili said.

Russia is fighting a war with us in our own territory” [note: this is a more extensive excerpt from Saakashvili’s interview with CNN referred to in the previous post]:

“This was a very blunt Russian aggression. … We are right now suffering because we want to be free and we want to be a multi-ethnic democracy,” Saakashvili said in the interview.

“We are in this situation of self-defense against a big and mighty neighbor. We are a country of less than 5 million people and certainly our forces are not comparable,” the president said.

Saakashvili also said it was in the United States’ interest to help his country.

“It’s not about Georgia anymore. It’s about America, its values,” he said. “We are a freedom-loving nation that is right now under attack.”

Neither the White House or the Pentagon had any immediate reaction to the situation. The U.S. Defense Department has less than 120 personnel in Georgia. They are involved in training Georgian forces.

Saakashvili said Georgian forces had shot down two Russian aircraft. “One of the aircraft was specifically attacking a civilian hospital wounding doctors and patients with no real purpose,” he said.

Saakashvili’s playing the same cards he’s used repeatedly to secure support from the Bush Administration. But does he really expect the United States to send in the Marines? One hopes he’s asking for US diplomatic assistance, because I can’t imagine he’s going to get much else.

Watch the interview with CNN.

UPDATES: Fester speculates that Saakashvili wants the US to airlift Georgia’s brigade in Iraq back home. Meanwhile, not much out of the White House:

William Schomberg of Reuters argues that the Georgian offensive:

Georgia’s bid to re-take its rebel region of South Ossetia by force is a gamble by its leader that he can still count on Western support as he tries to thwart Russian efforts to regain influence over the ex-Soviet republic.

Analysts said the escalating conflict risked far-reaching consequences for a region that has become a test of the post-Cold War balance of power as well as a key energy transit point for Europe which needs oil and gas from Asia.

The entire analysis is worth reading–particularly concerning Saakashvili’s tendency to “overreact” to provocations–but the end sums the stakes up nicely:

Analyst Nixey said Saakashvili could be jeopardising his country’s chances of getting into the alliance: “Ultimately his NATO ambitions could go out of the window.”

Strategic Forecasting Inc., based in the United States, said Georgia represented “the hottest flashpoint in Western-Russian relations” as it was the easternmost foothold of Western power.

“What is being decided here is whether bordering Russia and simultaneously being a U.S. ally is a suicidal combination. Whichever way this works out, the dynamics of the entire region are about to be turned on their head,” it said in a note.

I just want to emphasize that a lot of people with knowledge of Georgia have been raising alarms about the risks involved with a close US-Georgian relationship, particularly to the degree that Saakashvili believes it gives him more “strategic cover” than he actually has.

Saakashvili has sunk an enormous amount of his political capital into resolving–in Georgia’s favor–the frozen conflicts. This never made sense, as Saakashvili has a decent record to point to when it comes making the Georgian state more functional and less patrimonial. But, for whatever reason, he decided to stake his reputation on goals that the Russians will not accept.

Support for the regime also appeals to many neoconservatives and reconstituted Cold Warriors, both of whom see Russia’s creeping authoritarianism–and resource-fueled resurgence–as a profound threat to US interests.

But, as I indicated above, I think Saakashvili’s gotten it wrong if he expects the US to provide new forms of significant material aid.

UPDATE II: Eric Martin at Obsidian Wings provides some useful blogsphere links, including a backgrounder from the amazing Doug Muir at Fistful of Euros.

Russian armored vehicles have entered the northern edges of the capital of the breakaway Georgian region of South Ossetia, the separatists’ press service reported on its website on Friday.

“Russian armored vehicles have entered the northern suburbs of Tskhinvali,” the website cominf.org reported, adding that Georgian troops had started to retreat.

Moscow said its troops were responding to a Georgian assault to re-take the breakaway region, and Georgia’s pro-Western President Mikheil Saakashvili said the two countries were at war.

Obama and McCain both (uselessly) called for an end to the violence. Predictably, McCain (who wants to kick Russia out of the G-8) said Russia should withdraw. James Poulos notes the same point, but provides an ironic spin.