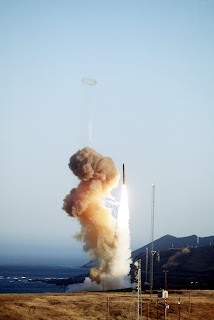 Some days ago I mentioned the resurrection–in spirit if not in name–of the Strategic Air Command.

Robert Farley echoed the dominant explanation in the media: the Air Force has badly bungled its handling of the nuclear forces. This is all a bit ironic, as the “big scare” of this kind in the 1990s was the decrepit state of the Russian nuclear arsenal.

Now we learn that our guys took five days to respond to a bad-wiring indicator in a Minuteman III silo. When they arrived, they discovered evidence of a fire that, thankfully, didn’t make it into the launch tube itself–where it might have ignited the missle’s fuel.

According to Global Security Newswire:

Spokeswoman Maj. Laurie Arellano said the Air Force did not disclose the incident at F.E. Warren Air Force Base, Wyo., until now because the investigation was only just completed. The fire joins a string of embarrassing nuclear management lapses for the Air Force, including last year’s accidental transfer of nuclear weapons (see GSN, Sept. 5, 2007), the mistaken shipment of nuclear warhead fuses to Taiwan in 2006 (see GSN, Sept. 26) and the roadside ditching of a Minuteman III missile being transferred to its silo (see GSN, Aug. 12).

The May 23 incident was caused by a faulty battery charger that caught fire at Minuteman III silo facility 40 miles east of Cheyenne, Wyo., and 100 miles north of Denver, Colo. The fire did not enter the missile’s launch tube, Arellano said, and did not threaten to ignite the missile’s solid-rocket fuel. Following standard U.S. policy, she did not say if the missile was currently armed with any nuclear warheads.

Repair crews responded to a bad-wiring indicator five days later and found the fire evidence, determining that it had burned for one or two hours (Dan Elliott, Associated Press/Google News, Oct. 30).

Yesterday’s Air Force report indicated that some duct tape had been used in the silo, drawing criticism from one nuclear-weapon expert.

“The notion that you’re patching up your H-bombs with duct tape is not encouraging,” said John Pike of GlobalSecurity.org. “You also have to wonder if you have this sloppy activity that is revealed by a fire happened, how much other sloppy activity has not been detected?” (Tom Roeder, Colorado Springs (Colo.) Gazette, Oct. 30).

But more a “heh” in the Munch sense.