Manas: the hands of fate? (Updated) 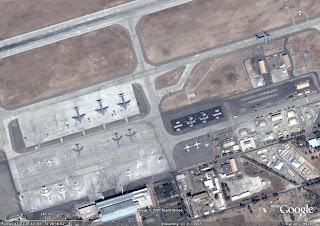 It remains unclear whether the Kyrgyz government really wants the US out of Manas or whether it wants to extract higher rents.

Rob Farley comments that the “United States has been paying considerable rent to use the airbase in question.”

Yes and no. It can be too easy to focus merely on the size of sidepayments. In fact, that might be part of the problem.

Remember that the US doesn’t officially pay rent for basing and access agreements. It just so happens that host countries get “unrelated” aid packages and foreign-policy perquisites. This isn’t simply a normative issue; the US has strong incentives to reduce the transparency of the price it pays for bases in order to preclude upward pressure on host rent seeking. Keeping the true “value” of transfers and concessions opaque both makes it more difficult for hosts to calculate the true “market price” of the strategic package it offers, as well as gives US officials greater ability to deflect direct demands for higher rents.

Prior to the Tulip Revolution, the US was getting Manas on the cheap. In addition to some development assistance that was probably in the US interest anyway, the US negotiated some pocket-change (in relative terms) contracts with Kyrgyz elites to supply goods and services to US forces. As Alex Cooley wrote in 2006 (PDF):

The Manas base also offered critical material support to the Kyrgyz president and his political clients. The base constituted the biggest U.S. economic investment in Kyrgyzstan. From its first year, it contributed about $40 million annually to the small Kyrgyz economy and employed about 500 Kyrgyz nationals in a variety of positions.

The lion’s share of base-related funds flowed not to national agencies, however, but to private Kyrgyz entities closely tied to the ruling regime. The Manas International Airport, a technically independent company partly owned by Aydar Akayev, the president’s son, collected $2 million annually in lease payments, plus additional landing fees of $7,000 per takeoff. The airport company also was awarded most of the base-related service contracts. These revenues flowed directly to Manas Airport and were neither accounted for nor taxed by the Kyrgyz government.

However, the most lucrative source of base-related payments were fuel contracts, secured by the airport- affiliated Manas International Services Ltd. and another legally independent fuel company, Aalam Services Ltd., owned by Adil Toiganbayev, Akayev’s son-in-law. A New York Times investigative story revealed that out of a total of $207 million spent by the U.S. Department of Defense on fuel contracts during the Akayev era, Manas International Services received $87 million and Aalam Services received $32 million in subcontracts. The amounts and structure of these payments were kept opaque and were not reported in the Kyrgyz media. A subsequent investigation by the U.S. Federal Bureau of Investigation uncovered that the Akayev clan had embezzled tens of millions of dollars of these base-related revenues through a network of offshore accounts.

Pentagon and State Department officials contend – and they are legally correct – that none of these payments or contracts clearly violated any U.S. laws or DOD tender procedures. But such claims do not change the fact that these payments played a highly
political role within the Kyrgyz political system. These base-related revenues supported the Akayev regime and its political clients, who regarded them as the unstated quid pro quo for granting basing rights to the United States and its coalition partners.

Commenting specifically on the adoption of the seemingly generous landing rights formula, former U.S. ambassador to Krygyzstan John O’Keefe suggested that the fees could have been avoided but were viewed by the U.S. side as an important economic inducement that would secure the Kyrgyz government’s commitment. Consequently, these private or selective incentives also served to “depoliticize” the base issue in Kyrgyz politics, as political parties, the Kyrgyz parliament, and the media neither publicized nor overtly criticized the terms of the basing agreement.

The problem came when the new government “opened” the terms of the US-Kyrgyz agreement and realized what was actually going on. They demanded an hundred-fold increase in rent. The ultimate agreement fell short of Kyrgyz expectations.

As I alluded to in my prior post, there are a couple of dynamics going on.

First, the Kremlin has never been particularly pleased with US influence in Central Asia (Russia has its own base in Kyrgyzstan). It looks like the Russian government decided to provide “exit options” to the Kyrgyz in the form of a significant offer of bilateral assistance. Even if that aid is unconditioned upon shutting down US operations at Manas, the Kremlin’s decision to play Monty Hall still significantly shifts the balance of leverage in US-Kyrgyz negotiations towards the Kyrgyz. Indeed, I write about this dynamic in a forthcoming review essay on the state of balance-of-power theory.

Second, the US approach toward Manas, consistent with the so-called “lily pad” vision of the 2001 QDR (PDF), focused on creating a “light footprint” base with minimal social impact on the country. The idea is that doing so makes anti-basing sentiment less likely. In fact, such a posture only increases suspicions about US policy objectives, fails to avoid incidents of the kind that reduce the legitimacy of the US presence, and inhibits the process whereby US bases produce substantial local public goods.

Thus, while current US rents really are quite substantial given the size of the Kyrgyz economy, they come in a variety of side payments that fail to concretely tie the base to the prosperity of significant domestic constituencies. Under those circumstances, the dynamics of the relationship become merely about the size of the aggregate rents paid by the United States compared to public concerns over US activities, i.e., the least desirable frame for US negotiators.

UPDATE: As I was arguing:

Bakiyev has been seeking more money from the United States for use of the air base, and the timing of his announcement seemed designed to highlights his nation’s economic needs. Russia agreed to provide Kyrgyzstan with $2 billion in loans and $150 million in financial aid, and also to write off $180 million in debt and build a $1.7 billion hydropower plant.

U.S. payments to Kyrgyzstan currently total $150 million a year, of which about $63 million is rent for the Manas base. “We hope to continue those discussions because Manas is vitally important to our operations in Afghanistan,” said Pentagon spokesman Geoff Morrell. Morrell added, however, that “we can continue without it, obviously.”

“There is obviously a long-term political dimension here that’s in play vis-à-vis Moscow,” a senior U.S. Central Command official said yesterday, with Kyrgyzstan “trying to play one bidder off the other. The United States is caught in the middle, seeing who is going to be the highest bidder. We don’t know yet whether this is simply a card being played in the negotiating process or they are going to ask us to leave.”

The Manas base is “pretty inexpensive from the U.S. point of view when you consider what it gives us in terms of access in the region,” the official said. “I don’t know what price the United States is willing to pay . . . but at the same time I don’t know whether we’re willing to be held hostage.”