Beyond the lessons of empire

Not a few people have asked me to comment on Steve Walt’s “10 lessons of empire” post. Or, more precisely, they’ve asked me “why haven’t you written anything on Walt’s post?” I guess my initial reaction was, more or less, that I’ve said my piece on empires and imperial dynamics; if a prominent academic wants to blog about the “lessons” for the US he found in a history of the British Empire that he read on vacation, then, well, more power to him. After all, most of the realist scholarly writings that invoke empire don’t go far beyond this sort of exercise. But, at the end of the day, I suppose I should probably weigh in.

In brief, Walt’s “lessons” range from pretty banal to not quite right.

1. There is no such thing as a “benevolent” Empire.

In his classic history of ancient Rome, Gibbon had noted that “There is nothing more adverse to nature and reason than to hold in obedience remote countries and foreign nations, in opposition to their inclination and interest.” Britons thought of the empire as a positive force for themselves and their subjects, even though they had to slaughter thousands of their imperial subjects in order to maintain their control. Americans should be under no illusions either: if you maintain garrisons all over the world and repeatedly interfere in the internal politics of other countries, you are inevitably going to end up breaking a lot of heads.

By this standard, of course, there is no such thing as a benevolent political community, period. As any realist worth the name should know, all political authorities rely, to one degree or another, on coercion to maintain control over their citizens or subjects. Some states are more coercive than others, of course. And some empires are also more coercive than others. The more interesting questions revolve around accounting for why empires find themselves more or less dependent on using brute force, as well as other kinds of coercive power, to manage their territories.

2. All Empires depend on self-justifying ideology and rhetoric that is often at odds with reality.

British imperialists repeatedly portrayed their role as the “white man’s burden” and maintained that imperial control brought considerable benefits to their subjects. (This is an old story: France proclaimed its mission civilizatrice, and the Soviet empire claimed it was spreading the benefits of communism. Today, Americans say we are spreading freedom and liberty). Brendon’s account describes the various benefits of imperial rule, but also emphasizes the profound social disruptions that imperial rule caused in India, Africa, and elsewhere. Moreover, because British control often depended on strategies of “divide-and-conquer,” its rule often left its colonies deeply divided and ill-prepared for independence. But that’s not what English citizens were told at the time.

We could debate whether Walt’s describing a bug or a feature of imperial control, but, yet again, self-justifying ideologies and institutionalized hypocrisy are not distinguishing characteristics of imperial rule. They are endemic features of political life. As one (admittedly obscure) 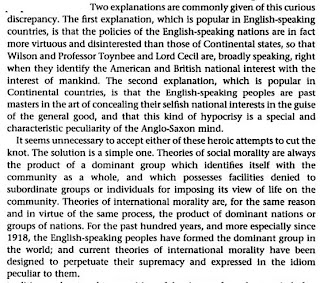 Although the British did worry a lot about their reputation and prestige (what one might now term their “soft power”) what really killed the Empire was its eroding economic position. Once Britain ceased to be the world’s major economic and industrial power, its days as an imperial power were numbered. It simply couldn’t maintain the ships, the men, the aircraft, and the economic leverage needed to rule millions of foreigners, especially in a world where other rapacious great powers preyed. The moral for Americans? It is far more important to maintain a robust and productive economy here at home than it is to squander billions of dollars trying to determine the political fate of some remote country thousands of miles away. External conditions may impinge on U.S. power, but it is internal conditions that generate it.

On the one hand, I doubt Walt would find much disagreement with the proposition that empires tend to get into trouble when they no longer enjoy sufficient military and economic resources to control their possessions. On the other hand, I’m not at all clear whether Walt is talking about global hegemony or empire. Since I’m feeling lazy, I’ll just quote myself:

Many of those who affirm the imperial character of the United States, in fact, compare the scope of its power and influence to that of Rome and nineteenth-century Britain. Both, however, controlled empires and, at various times and in various places, also operated as hegemonic and unipolar powers. We should, therefore, exercise a great deal of caution lest we declare the United States an empire through a comparison with Roman and British preeminence…. Empire, properly understood, describes a form of political control exercised by such minor powers as Belgium and the Netherlands. The concept enjoys no intrinsic relationship with the distribution of power.

Another problem with Walt’s lesson is that it glosses over the degree to which imperial “hard power” depends upon more nuanced power relations.

Much of Britain’s land power in Asia stemmed from the Indian Army, a force composed of South Asian volunteers.

In fact, empires often work by recruiting local collaborators, providing benefits to at least some segment of the local population, and engaging in various forms of divide-and-rule

. To the extent that empires succeed at these ventures, they lower their “governance costs” and enhance the net benefits they derive from imperial control (PDF).

In other words, an empire’s “hard power” resources are, at least in part, a function of its success at imperial management, which, in turn, depends on dimensions of power beyond those associated with simply counting the number of troops at its disposal and the size of its metropolitan economy.

4. As Empires decline, they become more opulent, and they obsess about their own glory.

Brendon’s description of the British Empire Exposition at Wembley in 1924-1925 is both slightly comical and bittersweet; with cracks increasingly evident in the imperial façade, Britain put on a lavish show designed to bind the colonies together and highlight its continuing glory. Moral: when you hear U.S. politicians glorifying America’s historical world role, get worried.

I suppose. But, then again, U.S. politicians have been glorifying “America’s historical world role” since the founding of the country, so maybe I’m not that worried. I’ll tell you what will make me worried: when U.S. planners start to realize they’ve extended far more security guarantees than they can make good on or we face multiple rebellions against friendly regimes throughout the world

The British empire was not a uniform enterprise; the various bits and piece were acquired at different times and in different ways, and the relationship between London and the different components was far from uniform. One could say the same thing for America’s less formal global “empire”: its relationship with NATO is different than the alliance with Japan, or the client states in the Middle East, or the bases at Diego Garcia or Guantanamo. An empire is not one thing.

6. When building an empire, it’s hard to know where to stop.

The expansion of the British empire after 1781 shows how difficult it is to engage in a rational assessment of strategic costs and benefits. Once committed to India, for example, it was easy for Britain to get drawn into additional commitments in Egypt, Yemen, Kenya, South Africa, Afghanistan, Burma, and Singapore. This was partly because ambitious empire builders like Cecil Rhodes were constantly promoting new imperial schemes, but also because each additional step could be justified by the need to protect the last. History has been described as “just one damn thing after another,” and so is the process of imperial expansion.

Yes, both of these are right. Moreover, nearly every

written in the last forty years makes these central points of its analysis of imperial rise and decline.

7. It takes a lot of incompetent people to run an empire.

A recurring theme in Brendon’s account is the remarkable level of ignorance and incompetence with which the British empire was administered. Although there were obviously some very able individuals involved, Britain’s colonial endeavors seem to have attracted an equal or greater number of arrogant, corrupt, and racist buffoons. The bungling that accompanied the U.S. occupation of Iraq looks rather typical by comparison.

Very droll. Your mileage will vary across time and space, however, when n is greater than one. Imperial history is full of both astounding brilliance and puerile incompetence. Kind of like the history of all forms of governance, when you think about it.

8. Great Powers defend perceived interests with any means at their disposal.

Great powers like to portray themselves as “civilized” societies with superior moral and ethical standards, but realists know better. Like other empires, Britain used its technological superiority without restraint, whether in the form of naval power, the Maxim gun, airplanes, high explosive, or poison gas., and the British showed scant regard for the effects of this superior technology on their “uncivilized” targets. Today, the United States uses Predators and Reapers and smart bombs. Plus ca change …

I thought we were talking about empires, not great powers.

Anyway, this reminds me of what I take to be the primary lesson of offensive realism:

“states always maximize power, except when they don’t.”

Similarly, I think it is fair to say that “great powers defend perceived interests with any means at their disposal, except when they don’t.” US technological superiority in Afghanistan and Pakistan extends just a wee bit beyond remote-controlled airplanes with guns, and includes a good many capabilities the United States hasn’t used, or uses in one case but not in another. Same can be said for other great powers, past and present.

9. Nationalism and other forms of local identity remain a potent obstacle to long-term imperial control.

Britain’s supposedly “liberal” empire contained a deep contradiction: a society that emphasized individual liberties could not hold in bondage whole societies and deny the inhabitants independence. Once nationalism took root in the colonies (intermingled with other tribal and/or religious identities), resistance to imperial rule increased apace. As the United States is now discovering in Iraq and Central Asia, most peoples don’t like taking orders from well-armed foreigners, even when the foreigners keep telling them that their aims are benevolent.

Note how this point tracks with my comments concerning overplaying the centrality of “hard power.”

10. “Imperial Prestige” is both an asset and a trap.

Britain’s leaders fretted constantly about any erosion in their image of superiority, fearing that one or two setbacks might lead their subjects to rise up or encourage other great powers to poach on Britain’s holdings. As a result, Britons found themselves fighting to defend marginal possessions in order to preserve their position in the places they believed mattered. Ironically, the refusal to liquidate far-flung commitments early so as to focus resources on more vital interests may have hastened Britain’s imperial decline.

This captures one “standard model”

of strategic overextension (see Habsburg Spain, the Vietnam War, etc.). Indeed, the interesting question is not whether or not these process happen, but the conditions under which metropolitan officials are right or wrong about the consequences of losing “prestige” by cutting-and-running from a peripheral conflict. I should also note that a number of other processes produce counterproductive peripheral entanglements, and it may be a mistake to treat “reputational concerns” as the most important factor involved within or across particular cases.