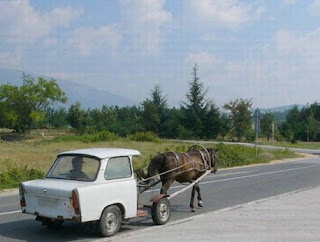 I have the suspicion that my fan base might be the choir, and I want to be sure I play it down the middle. I am sure that Duck readers are the kind of folks who can laugh at themselves.

Post-positivism emerged out of a critique that science does not evolve on the basis of a greater ability to establish the truth, but rather to consolidate power over others. Knowledge always serves someone’s interests. The fact that your car started this morning is a function of the fact that it hates the native people of Naturaloildepositstan who are being ruthlessly exploited by transnational oil conglomerates. The theory of internal combustion is an act of colonial repression.

Post-positivists like to stress how the material world only acquires meaning based on the roles and meaning that humans assign to it. There is no ‘car’ unless there is a ‘driver.’ If that role were to be redefined into say, a ‘jockey’, your car would become a horse. Just like that.

Power relations are established and reproduced through language, according to Foucault, a favorite of European political scientists. Or is it Derrida? Or Habermas? Or Bordieu? No one really knows. In fact the sentence you are reading right now is keeping the indigenous peoples of the Third World from rising up against their oppressors. Wait, that’s not the right word. Indigenous makes them sound primitive and legitimates our rule over them. Perhaps, ‘first peoples.’ No, that’s primitive too. See how goddamn hard this is! European political scientists would like you to stop talking right now. You are hurting the world.

Post-positivism is also sometimes known as critical theory because European political scientists are critical of their readers. Post-positivists are mad at you. You are part of the problem. All of them. Dolphins in tuna nets. Global warming. The rain forest. The exploitation of coffee farmers in Latin America. And the whales. There are no more whales! But there is nothing you can do about it. You participate in the dominant discourse unwittingly.