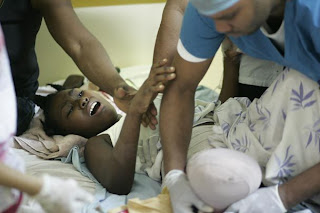 The more I think about it, the more atrocious it is that a three year old burn victim in Pakistan or Libya cannot automatically access morphine.

Imagine being such a child’s parent, watching her suffer without pain relief. Imagine being a “collateral damage” victim undergoing surgery for shrapnel removal without anesthetic. Or imagine being an earthquake survivor like the Haitian 10-year-old above, having your mangled limb amputated and then trying to recover with no means to manage your pain.

Recently I spent some time talking to Jason Nickerson, a PhD candidate in population health at the University of Ottawa with a background in anesthesiology and years of field experience in Ghana. That conversation was peppered with horrific anecdotes from his days in Africa: watching children undergo surgery without morphine, watching trauma victims of routine road accidents dying in agony from their untreatable injuries.

This is a simply grievous situation, particularly because it’s so preventable. Yet until recently, I had always imagined that the major travesty in such cases was the absence of rehabilitative care – 60 Minutes’ expose of the Global Medical Relief Fund a few weeks back, for example, emphasized inequities in orthopedic or reconstructive surgery for child trauma victims in developing countries, but didn’t mention the simple fact that these children also lack basic anesthesia to cope with their trauma – even when undergoing surgery.

Since I’m writing a book about why some social conditions get constructed as global policy problems and others don’t, I’m primed to wonder why this issue has so little traction on the global agenda, why it’s not front and center in more people’s understanding of global public health. Based on my research about global agenda-setting dynamics, I have two answers and one policy recommendation for the campaign:

Explanations: Issue Complexity and UN Complacence. These two factors are strongly correlated with how likely it is that a global social problem will get attention by global policymakers. They’re also correlated with each other.

1) “The Complexity of the Problem.” Typically, neglected global social problems have garnered attention from policy “gatekeepers” (like donors or powerful NGOs and UN agencies) when they have been repackaged as significant, solvable problems by issue entrepreneurs. It’s easier to do that with some problems than it is with others. In their landmark book on advocacy campaigns, Margaret Keck and Kathryn Sikkink argue that problems with a short causal chain to a specific perpetrator, whose behavior (if changed) can quickly solve the problem, are better advocacy candidates than problems whose sources are complex or “irredeemably structural.” And unfortunately, inequities in pain medicine are the result of myriad factors: culture, bureaucratic practice in developing countries, international governance of the drug trade, antiquated preferential trade agreements. These inequities are solvable through a series of steps that could easily be taken with appropriate political will. But because the steps need to occur in tandem, it becomes harder for an advocacy movement to package the solution as a single concrete policy proposal. [Though they’re trying.]

2) Inattention From Advocacy “Gatekeepers.” Clifford Bob has noted that the most important nodes in transnational issue networks are the organizations most visibly associated with the relevant issue area (Amnesty International plays this role for the human rights issue area, Greenpeace for the environment, the International Committee for the Red Cross for humanitarian affairs, etc). My work on weapons norms confirms Cliff’s insight: such organizations can propel an issue to the global stage simply by paying attention to it; or they can consign it to the margins of the issue area by ignoring it. In the global health arena, the key gatekeeper is the World Health Organization. WHO has nominally “adopted” the issue of pain relief, with a press release and a “Global Day Against Pain.” But unlike its vast efforts in the area of HIV-AIDS, it has not thrown resources behind this issue. If it did – if a donor like the US earmarked $10 million toward pain relief advocacy and the WHO exercised its authority to initiate a Framework Convention, for example – the issue could take off on the global agenda and important changes could result.

So how to get donors to make this happen? By simplifying the issue – focusing on just a piece of it – and let that piece be the one that resonates with the widest swath of citizens in donor countries.

Recommendation: Shift the Frame. Currently, the global pain relief issue has been framed around access for terminally ill patients. Much of the noise is coming from the palliative care health community. Many of the anecdotes provided in news coverage refer to cancer and HIV-AIDS victims. The WHO’s engagement with the issue is directly related to its work on cancer pain relief. Certainly this is a huge segment of the population who would stand to benefit from wider availability of pain meds. Suffering from cancer is (I have heard) no less painful than suffering from lacerations or burns. And the ability to die with dignity instead of in agonizing pain is certainly an important human right and a noble cause. But as a cause that resonates with a mass audience and policymakers (in a donor culture where the right to die itself remains a controversial topic) I suspect this angle is going to be less resonant than images of child burn and wound victims – experiences most people can relate to. Bottom line: the movement needs to focus on the absence of anesthetic for surgery and trauma care in the developing world, using landmine and road traffic accident victims as poster children, and move away from arguments about palliative care… for now.

This argument may seem heartless. But note that this type of strategy has been used by most successful advocacy campaigns of the past. Complex issues can be and have been turned into successful campaigns (think of efforts to stop “violence against women” and “global poverty”). But the campaigners that do so frame their issues not necessarily to reflect the complete, “irredeemably structural” picture but so as to resonate with their target audience and attract the greatest sympathy possible.

Landmines campaigners, for example, didn’t focus on the complete picture of landmines – how in some cases they’re probably more humane than the alternatives, or how the biggest victims of landmines are military age men. Instead they stressed the collateral damage of mines to children and women because this would resonate with publics and policymakers. The child soldiers campaign didn’t focus on the complexity of the child soldiers issue – how these children are some of the least vulnerable in conflict zones, and often choose to join armed groups as a rational response to poverty, family violence, or political engagement. Instead they focused on the most heinous cases of child abduction into groups and used this frame to galvanize a movement. In both cases, their efforts resulted in a treaty.

Once analgesics are more generally available in the global south, palliative care victims will also benefit. To make that happen however, history suggests spot-lighting trauma victims rather than chronic, end-of-life pain sufferers could make for a more high-profile campaign.