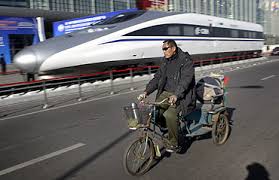 There has been no shortage of focus on America’s budget stress and the apparent relative decline of American political and economic influence around the world amid the rise of China. But, as several folks have recently noted, China itself faces a set of significant challenges.

I just returned from a week in China where I attended a working conference for a project on China in the World at Shanghai University of Finance and Economics. The conference looked broadly at China’s rise with several scholars focusing on the internal challenges and contradictions of Chinese society and its economic and political development. Here are just a couple of highlights:

1. China will soon face an enormous aging demographic (and labor) crisis. Professor Yu Hong presented her research on demographic trends and the challenges of aging population. In 1990, 10% of China’s population was over the age of sixty. Today it is 18% and by 2050 it will be nearly 30% — that’s almost 500 million people. With the combined effects of massive rural to urban migration and the one-child policy, the family-based and informal community-based social security networks have weakened substantially. This will put enormous budgetary strain on the economy as it tries to develop and implement a formal public social security system. We’ve never seen an economy deal such a massive aging population. The government is currently struggling to cope with the challenges of pension reform and pension fund management practice. In many ways, America’s challenges with the future of Social Security pale in comparison to what China faces in the coming decades.

2. In less than a generation China moved somewhere between 350 and 500 million people out of poverty and into a middle class lifestyle. An astonishing feat — and one that has no historic precedent. Yet today, those middle class families struggle with three major household budgetary challenges — affordable housing, school tuition, and health care. Housing is become particularly acute. Professor Li Qiang presented his research on housing reform and privatization since 1978 and the current state of housing challenges. Prices have skyrocketed in the past decade — especially since 1998 when the government suspended its subsidization of China’s housing stock and stopped direct provision of housing opting instead to offer cash subsidies to workers to find private sector housing. This has led to rising inequality in housing consumption as well as a new homeless population. Furthermore, while the financial industry is largely protected because of strict regulations and high downpayment requriements (a problem that ironically exacerbates the challenges to reduce domestic savings rates and jump start domestic consumption among young males), the housing prices — especially in urban cities — are at all-time speculative highs and many analysts now anticipate major price corrections that could well send significant shock waves through the economy.

3. Although China’s domestic industry has grown more competitive throughout the world, there is some question about the degree and magnitude of technology upgrades in its domestic industries — a key requirement for future development and growth. Professor Shu Keng and Dong Jing presented two separate papers on government-supported sector wide technology upgrades initiatives. Shu found that local government policies often disrupt technology upgrades, and in fact, in the local communities he investigated, many of the policies have been counterproductive by spawning a wave of geographical transfer of industry rather than technology upgrades. Dong found that, within Shanghai, targeted government subsidies have produced a significant levels of firm-level technological upgrades. The question we were left with was whose results are the norm and whose are the outlier.

China is an enormously complex place and the contradictions of its growth and development are present everywhere. I was struck by it most evidently traveling between Shanghai and Hangzhou last week. There is a brand new modern super highway with manicured hedges along the entire 150 mile-long median that runs parallel to the overhead bullet train that races along above 150 miles/hour. Yet, right below the train and alongside the highway, small landowners harvested wheat using 1,000 year old farming techniques — harvesting and bundling by hand and then burning off the fields. The thousands of open field fires spewed massive dense smoke along the entire 150 miles and limited visibility to below a quarter of a mile for most of the trip.

These findings and impressions build on a central theme of a volume I co-edited two years ago with Eva Paus and Penny Prime, both economists, titled Global Giant: Is China Changing the Rules of the Game? Several of the contributors of that volume — Cheng Li, Iain Johnston and Sheena Chestnut, Susan Shirk, and Kelly Sims Gallagher all questioned the degree and pace of China’s rise by identifying a wide range of internal challenges and trends on demographic stress, environmental degradation, resource scarcity, social mobilization (and dislocation), and political stagnation and generational transition. It is clear that China’s rise is not linear nor will it occur without setbacks.

For us IR scholars, we tend to focus on the data points that suggest American decline — the US budget deficit, its military over-commitments, and the dysfunctional national politics and such. Yet, if we look closer at the internal issues within China, despite its impressive levels of economic growth over the past two decades, it’s not at all clear that we are on the verge of some kind of global power transition — at least not any time soon.