Making me Mlad: Why you can’t compare the Mladic and Osama bin Laden raids 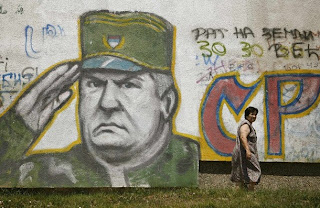 Charli has been writing about international justice, arguing against ‘myths’ – and comparing the efforts to bring Mladic to justice as opposed to the rush to shoot Osama bin Laden in the face. Others, such as John Feffner at Foriegn Policy in Focus have made similar arguments.

I agree and disagree with some of the points being made. However I am concerned that that many of these arguments seem to completely ignore or fail to appreciate the different context of the Mladic and OBL raids. I just don’t think we can pretend these are at all similar situations – even looking beyond “status” issues, (who was/is a combatant/civilian etc). Rather, I think the core issue here is time and context.

For lack of a better term, bin Laden was caught and killed “during” the War on Terror, a period of active hostilities between the US and al-Qaeda. Mladic was captured over a decade and half after the Dayton Accords. The situation in the Balkans is far from perfect, but it’s certainly calmer. People have been able to get on with their lives as they rebuilding their homes, villages – even if scars can never perfectly heal.
The ICTY was established in 1993 (- a great way for the West/UN/European countries to look like they were doing something about the ethnic slaughter when they really weren’t). Mladic was indicted in July 1995 and surely was eligible to be captured and extradited from that point on.

There’s no question that it’s been a painful and horrible wait, but I wonder if it is also one that has allowed cooler heads to prevail? There have been protests in Serbia, of course. But they have not been on a truly significant scale. Mladic has been caught, charged, extradited (despite appeals) in under a week. Would this have actually been possible in 1995? Possible without tearing apart a freshly signed peace treaty? Aggravating a tense situation? And an angry population?

I’m not saying that international justice does not work – but I do not think 1) it always needs to take the form of an international court 2) that it should be done immediately.

Although it’s been nearly a decade since 9/11, the fact that the War on Terror has been ongoing makes the OBL situation different. bin Laden was a leader of a terrorist group actively planning attacks against the United States and other targets. Mladic, clearly a jerk of international proportions, was guilty of crimes but had returned to civilian life – and so have many others. The Hague will not become the centre of terrorist attacks or even protests. I’m not sure the same could have been said for OBL. Does this mean a trial for both was impossible? No. Does this mean the circumstances were very, very different? Yes.

The bottom line – you can’t make a fair comparison between Mladic and bin Laden when it comes to international justice.

The other reason this consideration is important is that the UN has released a report saying that both sides have conducted war crimes in Libya. Is it the best idea to indict individuals now? Or wait until the conflict is over, the country has a chance to catch its breath and then begin to take a good hard look at what has happened on its territory? Time may or may not tell.