Harry Potter and Foreign Policy, or Voldemort is not Osama Bin Laden

One draft of a piece that will not be appearing anytime soon. I will post the other version, a strategic-studies analysis of the outcome of the Deathly Hallows, later on.

The sixth Harry Potter film, the Half-Blood Prince (2009), opens with Harry standing side-by-side with his mentor, recently reinstated Hogwarts Headmaster Albus Dumbledore. Blinding flashbulbs illuminate Harry’s vacant stare, rendering the scene a literal, as well as figurative, flashback to the immediate aftermath of the Battle of the Department of Mysteries, in which three clandestine forces clashed within the Ministry of Magic itself: Voldemort’s Death Eaters, Dumbledore’s Order of the Phoenix, and Dumbledore’s Army (the “DA”)—students trained in secret by Harry in “defense against the dark arts.” Harry’s indifference stems from shock: his godfather, Sirius Black, died in the battle, and in the background we hear the voices of Voldemort and Black’s killer, the insane Bellatrix Lestrange. 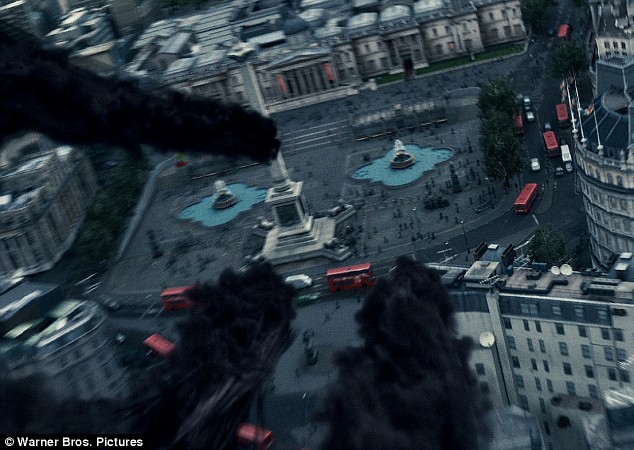 Flash forward to a modern glass-and-metal office building in London. Disbelieving office workers leave a conference table and walk to its picture window as storm clouds appear from nowhere. Darkness rapidly engulfs the sky. The camera tacks into the thunderous clouds themselves as they form into the image of a skull: the Death Eater’s Dark Mark. Three inky-black vaporous streams emerge from it. They look and move like the trails of impossibly agile sidewinder missiles. The three, which fans of the films recognize as flying Death Eaters, zoom down over the Thames as the camera moves into position behind them. They streak on through Trafalgar square and the streets of London. They’re no longer sidewinders, but rather supersonic air-launched cruise missiles. They pass into the heart of the wizarding world in London, Diagon Alley, and slam into Olivander’s Wands.

The camera pulls back to give a birds-eye view of the shop exploding—sending glass flying and knocking bystanders to the ground. The camera cuts to street level to show Fenrir Grayback, a werewolf and ally of Voldemort, roughly dragging Olivander—head obscured under a blindfolding black hood—away from his shop. In the company of two Death Eaters, Grayback launches into the air with Olivander. But before they leave London, the three fly along the Millennium Bridge. The force of their passage rips the bridge from its supports. It collapses, along with terrified pedestrians, into the Thames.

The opening of the Half-Blood Prince continues a trend begun in the Order of the Phoenix, in which danger bleeds seamlessly from the wizarding world into our own, and back again. None of this sequence, I should add, is a faithful translation of the book onto the screen. In the novels, Voldemort is the only Death Eater capable of unassisted flight. Readers learn of Olivander’s abduction via exposition. In the opening chapter of the Half-Blood Prince, recently sacked Minister of Magic Cornelius Fudge informs the Prime Minister of Britain that Voldemort is behind the destruction of a (fictional) bridge: “The Brockdale Bridge – he did it… he threatened a mass Muggle killing unless I stood aside for him and….” David Yates’ direction takes a basic fact about the Death Eaters—they are, by organization and tactics, terrorists—and renders it visceral. Its imagery blurs the distinction between magic and modern weaponry. Terrorism and warfare, it suggests, aren’t so different in Diagon Alley from the streets of Baghdad.

Indeed, later on in the Half-Blood Prince, Harry, Ron Weasley, and Hermione Granger take a trip to Diagon Alley to, as they have every year since being accepted into Hogwarts, purchase school supplies. On their way to Fred and George’s joke shop, they pass the abandoned and burnt-out wreck of Olivander’s Wands. As in the books, Hogwarts, already scarred by the brief, but ruthless, tenure of Ministry of Magic hack Dolores Umbridge, has been transformed. The school is under lockdown, protected by magical defenses and the special agents of the Wizard world, the Aurors. We also see it, for the first time, through the eyes of adolescents firmly on their way to adulthood. Harry and Ron tower above first-year students. Yates makes sure we notice snogging teenagers as his camera pans the halls. In some scenes, students lounge around drinking unidentified substances in the hours between classes and curfew. 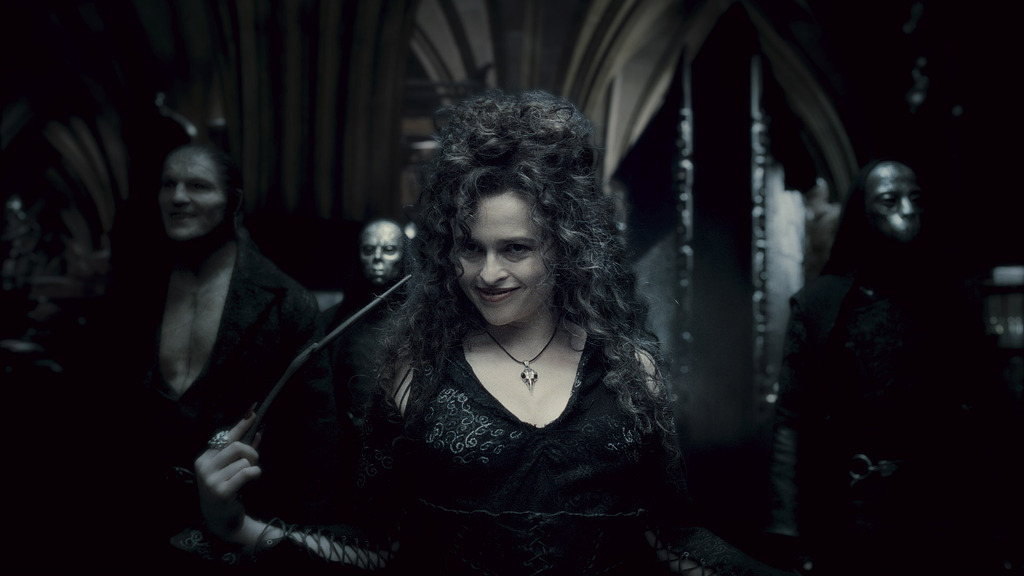 By the film’s end, these twin transitions are complete. Hogwart’s defenses have been compromised through the actions of Draco Malfoy, a student and uneasy Death Eater; Dumbledore lies dead at the hands of Severus Snape—a double-agent for the Order who, at least for the moment, appears to have actually been working as a triple-agent; and Harry, along with Hermione and Ron, has vowed to leave behind Hogwarts to find Voldemort’s remaining horcruxes: hidden containers for parts of his soul that, as long as they persist, protect him from death.

In many ways, the Harry Potter series interfaces uncomfortably with most understandings of international relations. Foreign policy is often about balancing unpalatable alternatives, as has been the story of US engagement with the so-called “Arab Spring,” its efforts to ensure the delivery of vital supplies to NATO forces in Afghanistan, and its dealings with North Korea. Rowling’s novels—and their film versions—are too sophisticated not to allow even good characters to make bad, and even cruel, decisions. For example, a significant thematic of The Deathly Hallows is that Dumbledore, who we know as a paragon of moral rectitude and self-sacrifice, has lived a far from untarnished life.

The wizarding world that Harry and his friends fight to defend is itself deeply flawed. Its enslavement of House-Elves is so complete that all but Dobby recoil at the thought of freedom. It denies full political and civil rights to other sentient magical creatures, including Centaurs and Goblins. Many of its members look upon non-magical humans (Muggles) with a sense of smug superiority; more than a few refer to witches and wizards born of Muggles as “mudbloods.” The Ministry of Magic proves willing to propagandize against those it considers threats via British wizardry’s leading newspaper, The Daily Prophet. As the series unfolds, we also see it conduct star-chamber trials, condemn people to torture at the hands of the soul-sucking Dementors, and frequently bend to the desires of the rich and powerful.

Through all of this, however, Rowling never gives us any reason to doubt that Voldemort and his Death Eaters are evil embodied. They stand for racial subordination, tyranny, and the sacrifice of others to their own ambitions. Voldemort himself is the series’ “Big Bad”; his every action, as well as his very appearance confirms his demonic nature. Voldemort’s eyes are and nostrils are slits, his skin serpentine. He commits numerous atrocities, such as suspending a tortured Hogwarts teacher (of “Muggle studies”) above the table on which he and his followers eat dinner or feeding an innocent old man to his snake familiar. Indeed, while many of Rowling’s “good” characters are flawed, and her “bad” characters—other than Voldemort—capable of redemption, there is little moral ambiguity in Harry Potter.

If there exists an explicit foreign-policy message in Harry Potter, it is that we should not sacrifice liberty for security. The books are resolutely anti-torture. Hogwarts games keeper Hagrid is briefly sent to Azkaban—the wizarding world’s Guantanamo Bay—without anything approximating due process. Sirius Black spends years there for crimes he didn’t commit, during which he is driven (temporarily) insane. Rowling strongly suggests that even the guilty do not deserve punishment at the hands of Azkaban’s Dementors.

In fact, the Ministry’s practices prove steps along the slippery slope to fascism and tyranny. Once the Death Eater’s subvert it from within, they easily harness its institutional apparatus for the persecution of mudbloods and other “undesirables.” They deploy its propaganda to further their ideological of racial purity and magical superiority, as well as to brand Harry the most dangerous enemy of the wizarding community. Although they control some recalcitrant officials with the Imperious Curse, others, including Umbridge, eagerly embrace the Ministry’s new policies. As long as Voldemort stays in the shadows, many wizards and witches don’t even recognize that his forces have seized control. 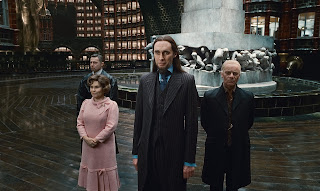 Once the Ministry falls, the dominant tropes of the two Deathly Hallows films increasingly center around those of a resistance movement fighting against a tyrannical regime. As Harry, Ron, and Hermione pursue Voldemort’s horcruxes they mount what are, in effect, guerilla raids against the Ministry and the Death Eaters. Disguised as employees, they sneak into the Ministry to retrieve a horcrux, find themselves freeing a group of “mudbloods,” and barely escape capture. They spend a good deal of the rest of the film running and hiding. Eventually, their attempts to gather intelligence lead to their apprehension by a group of Death Eaters. With the assistance—and self-sacrifice—of Dobby the House-Elf, they escape from the clutches of Bellatrix Lestrange only moments before Voldemort arrives to kill Harry.

Most of Part II concerns the final showdown with Voldemort and the Death Eaters. The pre-title sequence of Part II begins with Voldemort acquiring the most powerful wand ever created—the so-called “Elder Wand”—which he believes will make him invincible. The Battle of Hogwarts provides the major set piece of Part II, but beforehand some unfinished business remains. Harry, Ron, and Hermione steal one of the final horcruxes from Gringott’s Bank—the HSBC of the wizarding world… if HSBC were run by goblins and stored its patrons’ treasure in vault-lined caves and tunnels. Once again they narrowly evade capture, only this time they do so on the back of an abused dragon who guards the most important vaults. Their ride over London provides our last glimpse of the Muggle world until the film’s epilogue, which is fitting, because from hereafter we are firmly in the realm of fantasy.

The Battle of Hogwarts features a titanic clash between good and evil; moments of redemption , self-sacrifice, and rebirth; the triumph of the few over the many; and a final duel between Voldemort and Harry. The “Elder Wand” betrays Voldemort; it recognizes, for reasons too convoluted to explain here, that Harry as its true master. In the end, Harry breaks it into pieces and, in doing so, renounces the will-to-power that so twisted Voldemort.

In this respect, Harry Potter and the Deathly Hallows, Part II, is something like comfort food for unsettled times. Many people whom fans have grown to care about lose their lives, but never in vain. Voldemort’s defeat marks the end of the Death Eaters: absent his vision and the fear he inspires, they cannot recover. No wonder long-circulating comparisons between Voldemort and Osama Bin Laden gained a new lease on life in the lead up to the film’s release: for a generation reared on Harry Potter and marked by 9/11, it seems fitting that US forces killed Bin Laden not long before opening day. And it is nice, just for a moment, to imagine that Al-Qaeda, like the Death Eaters, will simply melt away.

But I think it is too easy to dismiss Harry Potter as fantastic escapism. Popular culture seldom has a direct effect on international politics. Instead, it supplies common referents that shape our understandings of events; its images, narratives, and ideas intrude into the “common sense” of its consumers. How it represents, for example, ethnic groups, ideologies, and threats matters. Thus, the very idea of an analogy between Voldemort and Bin Laden, and the ease with which it comes to mind for students of a certain age, takes on some significance. To the extent that popular culture influences our understandings of right and wrong, then the content of Potter’s moral compass matters even more. Rowling’s sophisticated treatment of torture, justice, propaganda, political inequality, and the dangers of state excess are likely to be among the enduring legacy of the novels and films.